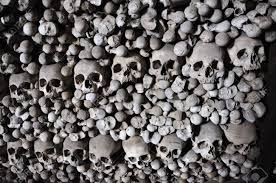 (The title of this brief reflection was an attempt at a musical rhyme – and if the theme were not so tragic, I might write the verses of a tragico-comic hymn. Perhaps I may still, but to the point at hand…)

Towards the end of H.G. Wells’ The Time Machine, 800,000 years in the future, the Morlocks – our subterranean descendants, who hate light, and fire even more – witness for the first time a forest ablaze. Many of them, counterintuitively, hurl themselves into the flames in a paroxysm of fear, but also, one might think, of fascination with the very thing they spend their lives trying to avoid.

Might we be more Morlockian than we admit, and was the time traveler really seeing the present?

We avoid death – even the mention of the word is uncomfortable. Rather than ‘died’, we say someone has ‘passed’ – into what, we don’t seem quite clear. Death somehow is too brutal, too definitive. We hide death away in hospitals, and its after-effects in funeral homes, with now a quick cremation the order of the day; the farewell is often an even quicker ‘service’ – if that – perhaps a eulogy or two.

And our lives before that tragic end are spent doing everything we can – even stopping ‘life’ itself – to avoid it, as these Covidian-lockdownian days are making clear.

Gone, it seems, are the days when people died at home, and were waked, with candles, and vigils, the body a living stark reminder of what was, of the reality of death, but with hope of a future resurrection. The Night That Paddy Murphy Died  and Finnegan’s Wake evoke such an era, that still exists, here and there. But such now would give most people the creeps. We are a thanatophobic society.

Yet, like the Morlocks, we are strangely absorbed by what we fear most, with thousands now plummeting into the dark abyss of euthanasia, ever-more popular since its legalization, and those are only the official numbers who have been medically murdered.

We will soon see a growing coercion to choose this wide and easy road, to save money, resources, and, most of all, suffering to oneself and one’s loved ones. If the ‘fire’ is going to get you at some point, you might as well dive right in. We are also, hence, thanatophilic – in love with death, its very (purported) nothingness a relief from the harsh and very definitive reality of life.

Perhaps, at the end of the day, what we actually love is comfort and ease – the panem et circenses offered by the government agencies and the media corporations tied inextricably thereto. And what we actually fear is suffering – paschophobia, we might so term it; not just that which immediately precedes death, but even the ‘suffering’ that is part and parcel of life itself. We would rather cocoon ourselves in the warm embrace of the state and its compassionate ‘experts’, entering a kind of anti-embryonic living death, by giving up everything to avoid even the faint risk of death; giving up our responsibility, our true care for each other; the labour involved in using the talents given us, and ‘working out our salvation’ in fear and trembling, of God, and not of other humans.

Our age is one of despair, of ennui, the inevitable bitter fruit of the loss of the transcendent, which is the only thing that can provide any meaning to suffering, for we have lost the purpose of life itself. What are we here for, and whither do we go?

We – and by ‘we’, I mean primarily we Catholics – must keep alive hope, regardless of what happens – hope not so much in this life, primarily, but in the next, firmly holding that however bad things get, all things ultimately work together for the good for those that love God – but not so much for those who do not love Him. And we must move heaven and earth to move them to love Him. They are more to be pitied than feared.

Only so will we maintain that dignity that belongs to us as beings made in the image of that same God Himself, and so achieve the glory of eternal life, for which we are destined, but only if we so choose, in freedom, to follow that narrow path of redemptive suffering.