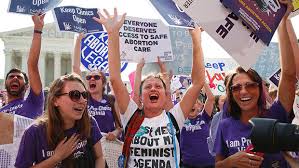 Another day, and more bad news.  One becomes benumbed after a time, which is not a good thing. Would that I could write on something uplifting, and I will, soon.  But the culture of death marches on, almost unabated, from victory to victory, and I wonder how much they need further to ‘win’, with the exception, perhaps, of stamping out any and all opposition with full-out Christian persecution, already happening in an insidious way.

Yesterday morning’s ruling by the hobbled Supreme Court of the United States (eight members since the death of Antonin Scalia), struck down a Texas law 5-3 that required that physicians who do abortions at the very least have admitting privileges to hospitals, and maintain the same standards as any mobile surgical clinic (whatever those may be). Even the ‘pro-choicers’, one would think, would have these safeguards to heart, at the very least to protect the women seeking an abortion, an invasive surgical procedure if ‘ere there was one.

But in the tortured reasoning of Justice Ruth Bader Ginsberg, requiring such standards would drive women into even worse conditions, ‘faute de mieux’ as she said, ‘without anything better’, in their desperation to seek to end the life growing within them. One wonders how much worse it could get than ‘Dr.’ Kermit Gosnell, whose ‘licensed’ abortion clinic was a house of putrid, unsanitary horrors. The Texan law would at least have made his sordid operation illegal.

To top it off, Justice Ginsberg declared that abortion was at least as ‘safe as childbirth’, and we don’t require all those laws and requirements for childbirth. I am not sure where she is getting her statistics on that one, but that is not really the point. Childbirth is a natural process and not a medico-surgical procedure, and for millennia of human history has been carried out at home. Only in emergencies does childbirth require surgery.

But in their rabidity, the pro-abortion side can stand no opposition to abortion, for even the hint of any limits and restrictions is a goad to their seared conscience. As I gazed at the women marching in jubilant victory down the steps of the Supreme Court, at least two of them ‘abortion providers’, I wondered about the conscience of such people, especially those who make their living from dismembering babies. Could they possibly be in ‘good’ conscience, and by that I do not mean justified, but one in invincible ignorance? What is the source of the apparent joy and bliss on the faces of such women?

Part of the answer is that for them to admit the life of the child at any stage within the womb is an anathema, for somewhere, deep in their unresolved psyche, they know that any gestational restriction to abortion is arbitrary, and that what is growing within a woman is indeed a child, especially if they have ever been ‘with child’.

So far, the arbitrary line in the legal sense is exiting from the birth canal. Then, and only then, according to the current consensus, does one have a ‘person’. By a secular miracle, the benevolent State, represented by these Justices, bestows upon this newborn individual the rights and protection to the full extent of the law.

It is curious, in this light, that another case was decided yesterday, that of Emile Weaver, a 21 year-old co-ed who gave birth to a child secretly in a sorority bathroom, then threw the poor baby into a dumpster, to die alone and untended. One also wonders about her conscience. She received a sentence of life in prison with no parole.  If she had had an abortion, even moments before, it would have been fully legal, even paid for, at least in Canada (there are more restrictions on late-term abortions State-side).

Of course, Ms. Weaver and her lawyers are going to appeal, and it will be interesting to see where this case goes in our current legally and morally confused milieu.

Can they not see the schizophrenia in this situation, and I do not mean in the mind of that troubled young woman, who is more to be pitied than condemned, although condemned to some extent she must be?

I am not sure how long such protection even of newborns will last. You have likely heard of Peter Singer, professor of ethics at Princeton, who advocates, amongst other things, for legally-protected infanticide up to two years old, if the child has some debility and is unwanted enough. In the narrow, materialistic universe of Professor Singer, in many cases animals have more rights than ‘defective’ humans, seeing as they have more ‘autonomy’, ‘capacity to suffer’ and so on.

His moral philosophy, once deemed radical, is now mainstream. Now that we here in Canada have legalized murder and suicide under the euphemism of ‘euthanasia’, the State can decide, through her ministers, who is killable, and who not. Already a court challenge has been raised against Canada’s ‘medical assistance in dying law’, not because it is immoral and evil (that would be good news) but because it is too 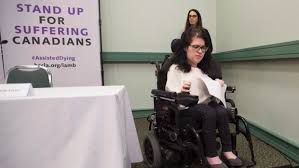 restrictive. Yes, just when you thought you were safe, Julia Lamb, who suffers from spinal muscular atrophy, which is not imminently fatal (the current requirement of medically-induced death under the law), but does result in suffering and debilitation for decades, has requested that she be given the right to have her life ended when and how she sees fit. Of course, her wheelchair-bound, thin, bespectacled, pain-racked frame evokes sympathy, as it should, but for all the wrong reasons in this case.

As predicted, indeed even before the law has received official royal assent, the scope of the prospective killing is already being broadened.

We are in dark and uncharted waters here, and the two sides, those who are for life and virtue, and those who are not, the respective cultures of life and death, in Pope John Paul’s words, are drifting further apart. Dialogue is becoming next to impossible with those who share not even our most fundamental principles, like the right to life, freedom, religion, and family.

Now the greatest country in the world (whose greatest days may be well behind it already), faces a choice between being led by, to various accounts, a narcissistic, multiply-divorced septuagenarian billionaire (who may or may not have had a ‘conversion’ to ‘conservatism’) and an venal, unscrupulous and deceitful sexagenarian millionaire (who most definitely has not had such a conversion). Although I think Trump may be the lesser of two evils, he is not the answer to our woes, which go much, much deeper than who becomes President of the United States. We are, to my reckoning, way past that point.

Even the hope that Trump will at least appoint ‘good’ Justices to the Supreme Court betrays a fundamental flaw: That in both the U.S. and Canada a small, elitist group of unelected officials of limited and narrow education and background, appointed for life, can ‘trump’ (pardon the pun) the properly elected members of Congress, Senate and Parliament, as well as any state, provincial and municipal laws, as happened yesterday in Texas.  Whither has gone, I ask, the rule of law, wherein authorities are meant to balance one another, or democracy, wherein the decision of ‘the people’ is manifest through their elected representatives? Even an all-conservative Supreme Court would wield far too much power for its, and our, own good.

What we are facing is a full-bore fight for life and death, which will require ever-greater counter-cultural resistance on our part against the insane laws being passed outside of the juridical and democratic process, the usurpation of the minds and souls of our youth, the dismantling of properly-construed laws. What has become manifest is no longer a culture, but a rank tyranny, of death and despair.

As one very holy, pious and intellectual priest, a famed Thomist with whom I had the honour of teaching, said once:  “I have lost all hope’.  But, he added, ‘…well, natural hope, but not supernatural!”. He had a dark, but also curiously joyful, Irish sense of humour, which he kept right up to the end of his own suffering and death in ripe and fruitful old age.

We must always remember that the battle is the Lord’s, and in the midst of apparent defeat, we must but trust, be patient and hold fast to the truth as clearly as we can.  Call to mind in these darkish days the divine promise:

Blessed is he who perseveres to the end.