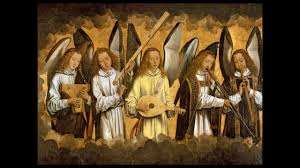 There are a lot of rumours about Guiseppe Tartini (1692 – 1770), a prodigious Baroque composer, who purportedly locked himself away to practise the violin consistently until he became a virtuoso, something parents might want to ponder.  There is also the story that in a dream, the devil played an entire sonata for him, that he wrote down when he awoke – hence, the ‘Devil’s Trill’ – one of the most difficult of pieces for one of the most difficult of instruments, filled with double stops and trills. Was it really the old accuser? I’m not sure he is capable of such musical beauty, but, if so, we’ll take what we can get:

Yet his concertos for flute – of course, with violin also prominent – are remarkably fluid and beautiful, with a peaceful and melodic Baroque quality on their own:

And, in honour of Our Lady in this Octave of the Assumption – and we will post more on music dedicated to the Mother of God in the days ahead – here is the incomparable Palestrina from a little over a century before Tartini: