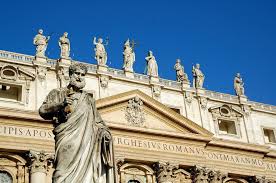 I have a reflection out this morning on Catholic World Report, on the Limits of Law and Obedience, if you’d like to peruse my own thoughts on the thoughts of Saint Thomas, in light of our current milieu.

While we’re on that theme, the question was raised in a previous post whether the Church should obey the state. Well, if by ‘should’ one means ‘must, or ‘is bound to’, the short answer is no. As Saint Peter replied to the Sanhedrin, following Christ, we must obey God rather than men.

Of course, one could cite other passages that imply differently-  Christ urging Peter to pay the tax, the same Peter exhorting obedience to, and prayers for, those vested with authority. In the nitty and gritty details of the complexities of the moral life, there are distinctions to be made. We Catholics are far from antinomian. Prescinding from the current milieu, it’s generally a good idea to obey civil laws and directives, which makes for a harmonious, well-ordered society.

But we must keep in mind that the Church does not have to obey the state, for she transcends the political order, and has no a priori obligation submit herself to civil authority or its laws or its transient leaders. To posit so is the error of Erastianism – named after the 16th century Swiss Zwinglian theologian and physician, Thomas Erastus, who held a modified and limited version of the heresy that goes by his name: That the ‘Church’ (insofar as Zwinglians believed in such an entity) is just one society amongst many in the body politic, and can be treated as such.

Not so: The Church, rather, is the Mystical Body of Christ, Whose Head is Christ Himself, the Second Person of the Blessed Trinity, King and Lord of heaven and earth, and of every political ruler, whether they know it or not.  As Christ said to the unwitting and troubled Pilate, ‘you would have no power over Me were it not given you from above’. Countless martyrs – Thomas a Becket being one of the more famous – died for this truth, the independence and transcendence of the Church.

Which brings us to whether the Church should obey state imposed protocols – the lockdowns, the limited numbers of attendees at Mass, and masking decrees, the banning of Communion on the tongue, and so on?

If one resists the law, one must also be prepared to take the consequences, which, as my reflection on law implies, may be dire, and should be carefully weighed. At times, it is the more prudent course to go along, and get along. But if the Church, through her hierarchy, does obey the laws of the state, that is, should be, and should be seen to be, their decision, not the state’s. The Second Vatican Council in her Decree of Bishops (Christus Dominus) teaches as much:

In discharging their apostolic office, which concerns the salvation of souls, bishops per se enjoy full and perfect freedom and independence from any civil authority. Hence, the exercise of their ecclesiastical office may not be hindered, directly or indirectly, nor may they be forbidden to communicate freely with the Apostolic See, or ecclesiastical authorities, or their subjects. (#19, emphasis added)

Some – the smirking secularists who will have their day – might see this as mediaeval and anachronistic. Well, if that literally means ‘timeless’, then the Church’s teachings are indeed so, transcending the vagaries of our anxieties, fears, our pestilences and crises, even time and history. Nero, Napoleon, Stalin learned that the Church will still stand after all their persecution, after they are dead and buried – and our current crop of leaders will one day learn the same.

It is my opinion that churches should never be locked down, for they are, as the rather arbitrary saying goes, ‘essential’, not just for the here and now, but far more, for eternal life. Yes, we can argue that people can nearly crawl all over each other in retail stores, at bus stops and train stations, along with various ‘approved’ protest marches, while the Church gets short shrift. But that’s really beside the point. It wouldn’t matter even if there were great risk in attending Mass, which must be offered unto the end of time. The apostles, martyrs, missionaries through the ages have taught us so, and it would do us ill not to have learned the lesson. We are an incarnational people, as are the sacraments, as is life.

There comes a time for making a stand, ‘thus far, and no farther‘, when we as a Church must resist civic authority, if its laws limit, undermine or are directly contrary to what ‘concerns the salvation of souls‘. We must pray that our bishops see when and where that time might be.

For the Church’s task is to proclaim Christ’s salvific truth, and offer His life-giving sacraments, fearlessly, with full voice, no compromise. In whatever way she responds in  this present crisis, she – which means all of us – cannot, must not, be subjugated, nor seen to be so.

For freedom, Christ has set us free. Let us live this exhortation as though we mean it.