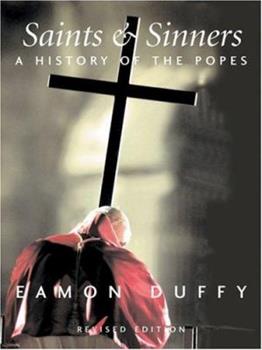 No Pope is impeccable, even if, by virtue of their office, they are at times infallible – or, more precisely, a few of their statements are. Every Pope is a sinner, as well, during their life, a potential saint. Some 81 of them have been officially canonized, about one-third of the 266, so far. And most of those saints were in the Church’s first millennium. Only twelve have been canonized since the 11th century, and four of them are in the twentieth: Pius X, John XXIII, Paul VI and John Paul II. Make of that what you will.

Hence, the title Eamon Duffy’s 2006 book, Saints & Sinners: A History of the Popes, is fitting. Dr. Duffy is perhaps best known for his 1992 magnum opus on the English ‘Reformation’, The Stripping of the Altars, where the author strips away many of the historical inaccuracies – we may as well call them lies – told of this era. One of the biggest is that the English people wanted the Anglicanism that was foisted upon them by the full coercive power of the state. The precise opposite is true, as evinced by the fact that the power of the state was necessary to enforce the radical transformation, and deformation, of the so-called reformation.

His more recent work has a similar theme. Sure enough, he peels apart some of the myths told of the Popes, and what we have left are a panoply of more or less flawed men, doing in some way the work of God, even if indirectly. For the Almighty can work through a saint as well as a sinner – things just take longer, and more indirectly, with the latter. As the saying goes, God writes straight with crooked lines, as well as crooked souls. But His ultimate will is always done, in the end.

As Dr. Duffy puts it in the opening lines of his preface:

Nearly 900 million human beings, the largest single collective of people the world has ever known, look to the Pope as their spiritual leader. His office symbolizes the rule of God himself over their hearts and minds and consciences. The words of popes weigh in the halls of power, and in the bedrooms of the faithful. And the papacy is the oldest, as well as arguably the most influential, of all human institutions.

I would clarify a couple of things: There are closer to 1.2 billion Catholics in the world. And the papacy is not a human institution (even if it works through human persons), but a divine one, founded by Christ Himself, bestowed on that vessel of clay Saint Peter, a self-confess homo peccator.

There are other sections of this book with which one may quibble, but overall, this is a very valuable, as well as quite ambitious project, tracing the Popes from the very beginning, from first, Peter himself, all the way to the 265th, Benedict XVI in 2006. This second edition runs to 420 pages, exclusive of end-notes, and there is a lot packed in there, many intriguing anecdotes, allusions and connections. It is an enjoyable, fast-paced read, but much that has had to be left out. After all, the history of papacy by Ludwig von Pastor runs to 16 full volumes, and only covers the papacies from the close of the middle ages to the dawn of the 19th century, that is, Clement V (+1314) to Pius VI (+1799), a span which Dr. Duffy covers in 96 pages. That said, one does get a good sense of the whole, but I would hope that the reader is led to more intensive treatments of some of the popes, and their responses to the issues they faced.

I do wonder what Dr. Duffy might say about Pope Francis’ own controversial papacy, which, to put it mildly, has caused upheaval in the Church. Back in 2013, the then-newly installed Pope said to World Youth Day pilgrims in Rio, ‘Hagan lio!’ – ‘Make a mess!’ – and he seems to have taken his own words to heart. Mess and mayhem pretty much describe much of the ecclesia moderna in the troubled and turbulent wake of Francis.

Then again, his pontificate not yet history, so we’ll have to wait to find out Dr. Duffy’s take. I would imagine the general judgement will tell us more than even the perspicacious professor. And if the papacy can survive what we’re going through, and what is has gone through, it’s some solid proof that it’s divine.