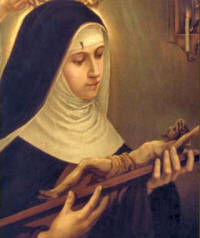 A fitting thought on this vigil day of Pentecost is that nothing is impossible with God. Did not Christ promise that He would grant anything asked for in the name of the Father? As the angel Gabriel said to Mary, all things are possible with the Almighty – the Omnipotens in our Creed.

So when we speak of ‘impossible’ causes, we must qualify the term, for impossibility – or, as some say desperation and desperate causes – depend much on whom of of what we speak.

Every saint is a patron of such ‘impossible’ causes, but there two who have been given the task as a special mission: Saint Jude, one of the Twelve, and today’s Saint Rita of Cascia (+1457). Although she felt a call to enter religious life, Rita was instead married off to an irascible, abusive, philandering, feud-fighting, ‘noble’ man, Paolo Mancini, at the tender age of twelve (customs and such were different back then). She bore him two sons, and, with patience, long-suffering, and heroic virtue, softened him over the years, so that prickly Paolo became almost pleasant, giving up his vengeful vendettas. When he was stabbed to death, after two decades of what we shall not presume to describe as marital bliss, there was hope for his redemption. Marriage is indeed a path to holiness and salvation. In fact, that’s its purpose – the good of the spouses, even if one be more advanced in the spiritual life than the other.

Rita prayed that her two sons – bent on revenging their father’s murder – would die rather than commit such a grave sin, and, soon enough, they too went to their eternal reward, stricken with dysentery. Such are some desperate prayers answered.

Now relieved of her familial obligations and duties, Rita sought to follow her first calling, and applied to enter the Augustinian convent of Saint Mary Magdalene, whose Sisters would only accept her only if she could somehow resolve the scandalous and murderous feud between her family and the Chiquis. So she prayed mightily – invoking three patron saints – John the Baptist, Augustine and Nicholas of Torentino – and, sure enough, peace was restored, and Rita, at the age of 36, became the consecrated religious she had always wanted to be.

For the next biblical span of forty years, she lived a holy, hidden ascetical life in the convent, joyful and peaceful, until her death on this day in 1457, in her 76th year. Her canonization had to wait a while – until May 24th, 1900, when she was officially declared amongst the heavenly host by Pope Leo XIII.

When she was about sixty, Rita was gifted with a wound in her forehead, much as would be caused by a thorn in a crown made of them, a partial stigmata, which was, as accounts relate, very painful and emitted a foul odour, an external sign of her sacrificial life. But, as is oft the case for such saints, her prayers were mightily efficacious, often answered miraculously, as they continue to be after her death (hence, her patronage).

Seven centuries have passed since Rita’s entrance into eternal bliss, but her body is still incorrupt, laid to rest in her glorious shrine at Cascia, about 60 miles north of Rome; in that mystery of God’s providence in glorifying His holy ones, she is still one of the most powerful intercessors in the heavenly pantheon, for all those missions impossible – pace, Mr. Cruise, who, now that I think of it, we may pray returns to his youthful Catholicism, along with all the countless others who have walked away from the Faith. Possible? Surely, for with God, all things are…