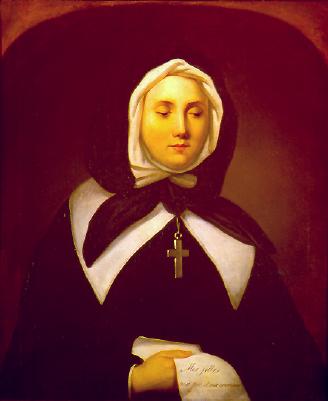 On this January 12th, in Canada we celebrate Saint Marguerite Bourgeoys (1620-1700), founder of the Congregation of Notre-Dame, and the first official school in what were the the untamed wilds of Canada.  A missionary from France in the mid-seventeenth century, she faced innumerable difficulties in her first years in the nascent Quebec City – then just a scrabbling outpost – before going to the outpost of Ville-Marie (now Montreal). It was here she started the first elementary school, free of charge, in an abandoned stone stable, which caused some astonishment. For this was in the era when every female religious was cloistered, not ‘out in the world’, and there were attempts to unite her new Order with the Ursulines, making them contemplative.

But Marguerite knew her mind, or, more properly, the will of God, and rightly resisted, stating firmly that her Sisters were not meant to be in convents, but to go forth to educate young minds and souls.  And go forth they did. The Congregation of Notre Dam flourished, and over the centuries has done indispensable and glorious work in forming untold generations of the young in Quebec. The days of such Sisters teaching for the glory of God and the salvation of souls  – instead of the benefits, hefty pensions and generous vacation time that are now the lot of government-bought-and-paid-for teachers – are gone, but not that long ago, and may yet be again, Deo volente.  There are still a number of valiant good teachers on the front lines, and a few faithful private Catholic schools founded in the past decade or two, all in the spirit of our saint.

The last few years of her long and fruitful life Sister Marguerite spent in prayer and writing, before she died on this twelfth of January in 1700, at the venerable age of 79. She was canonized by Pope Saint John Paul II on October 31, 1982, the first female saint of Canada.

The year that Marguerite had set sail for the new world, 1653, was just four years after the last of the Jesuit martyrdoms, of Saints Jean de Brebeuf and Gabriel Lalemant, whose blood, we may presume, laid the seeds for the great fruit of Marguerite and all the early Canadian saints who would follow. Yes, we once had a Catholic Dominion, which is still the ‘real’ Canada, lurking somewhere beneath the atheistic, secularized, culture-less, multi-culti hodge-podge, brought to its nadir under the socialist regime of Trudeau Senior regime and his successors, and this atheistic Canada is all the past two or three generations know. Under Trudeau, Jr., we’re doubling down on killing our unborn children, and now our elderly, sick and abandoned. It should not be a surprise that our once-peerless educational system has degraded accordingly. Woe to the children.

But hope is never lost! It is possible for Canada  to once again become who she was, who she is, and who she might be again, by the grace of the good God.  Pray to Saint Marguerite, the martyrs, and all the panoply of those early saints, missionaries and pioneers, known and unknown, that many may return to the true faith, and save Canada from the tragic path on which she now travels.