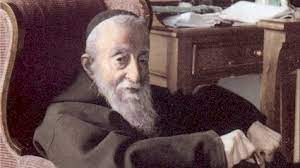 On this Tuesday 12 May 2021, we celebrate the feast of St Leopold Mandić OFM Cap. (+1942). Who was this great and humble saint whose relics, together with those of St Pio, Pope Francis wanted in the Vatican Basilica for some days during the Jubilee of God’s Mercy?

Leopold was born into a Croatian Catholic family, precisely in Castelnuovo di Cattaro (the today’s Herceg-Novi in Montenegro), on May 1866. He was the youngest of sixteen children who were born to Petar Mandić and Dragica Zarević, and at Baptism was given the names Bogdan Ivan (Deodatus John – or ‘John, Given by God’).

His paternal great-grandfather, Nicholas Mandić, was originally from Poljica, in the archdiocese of Split, to where his ancestors had come from Bosnia, way back in the 15th century. In those days the Capuchins, thanks to the Province of Venice, were present in the Province of Dalmatia, which at that time was part of the Austrian Empire, since 1688 under the government of the Republic of Venice.

His close contact with the friars at the time in their liturgical prayers, as well as after-school lessons, planted the seeds of the Capuchin vocation in the heart of little Bogdan (he grew only to 4’5″). Soon enough, the seeds bore fruit, and Bogdan was welcomed into the Capuchin Seminary at Udine. On May 2 1884, at the age of 18, he started his experience in consecrated life at the novitiate at Bassano del Grappa in Vicenza. It was here that he took the Franciscan habit and the name in religion, Brother Leopold, embarking on a life journey of complete dedication to God by following the rule and spirit of St Francis of Assisi.

Brother Leopold undertook both philosophical as well as theological studies from 1885 till 1890 in the friaries of Santa Croce at Padova and the Santissimo Redentore, in Venice, immersed in Holy Scripture and the Fathers of the Church as well as the Franciscan theology. His most awaited day of ordination arrived on September 20th, 1890, by Cardinal Domenico Agostini, Patriarch of Venice.

His continual study of Sacred Scripture together with the Fathers and Doctors of the Church had a clear purpose for Fr Leopold Mandić: the unity of separated Eastern Christians with the Latin Catholic Church. From 1887 he felt a great innate called within his heart to give his life for this most noble purpose. For that matter Fr Leopold prepared himself to study a number of Slav languages together with modern Greek. Moved by his great zeal for Christian unity he asked accordingly to be sent to the eastern mission in his homeland in order to fulfil his much loved ecumenical ideal. However, his superiors, upon scrutinizing his physical health, coupled with a speech impediment he had (a life-long stutter), decided not to accede to his wish. Instead they assigned him in the friary of Venice where he heard confessions, accomplished humble tasks in the friary and did door-to-door collections.

In September 1897, Fr Leopold was entrusted with the task of running the little friary of Zara in Dalmatia, and the need was felt to return back to Bassano del Grappa in Vicenza as confessor, which he did in August of 1900. In 1905 we find him having a short period of missionary activity as vicar of the friary of Capodistria, in nearby Istria. From this experience, Father Leopold was much appreciated and sought-after as spiritual counsellor. Yet once more after only a year, he was called back to the Veneto, precisely at the sanctuary of the Madonna dell’Olmo at Thiene (Vicenza). From 1906 till 1909 we find Fr Leopold serving there as a confessor, with the exception of a brief stay in Padua.

It was in the Spring of 1909 that Fr Leopold arrived in Padua, at the Piazzale Santa Croce. Friary. A year after his arrival, in August 1910, his superiors nominated him as director of studies. Thanks to this important role, Fr Leopold was responsible for young friars preparing for priesthood who were following Philosophy and Theology courses.

In these years marked by profound study and dedication, Fr Leopold taught Patrology. He distinguished himself from the other lecturers by his kindness, viewed by some as extreme. Apparently this virtue put him in a bad light, so much so that in 1914 he was immediately removed from his role as a teacher. One can imagine suffering this caused him.

The forty-eight-year-old friar, from autumn 1914, was asked to dedicate himself exclusively to hearing confessions. His God-given gifts of spiritual direction swiftly came into play. Many were the people, from all walks of life, who came from afar to go to him for confession.

Jesus kept asking Fr Leopold to give his everything to him. Even his Austrian nationality which might have proved vital for him to return to his homeland, which he loved so much, as a missionary one day. In fact, in 1917, with the Battle of Caporetto, as a “foreigner” living in the Veneto, Fr Leopold was investigated by the police. After he expressed himself of renouncing his Austrian citizenship, he was sent further down Florence to southern Italy. During his journey he stopped in Rome where he also had the grace of meeting Pope Benedict XV.

Upon reaching the Capuchin friary of Tora (Caserta) towards the end of September 1917, Father Leopold began his political exile. The subsequent year his superiors sent him to the friary at Nola in Naples and later to Arienzo in Caserta. But, for every ordeal there is an end, and just as World War I concluded Fr Leopold could happily return to Padua. During his journey home managed to visit the sanctuaries of Montevergine, Pompei, Santa Rosa at Viterbo, Assisi, Camaldoli, Loreto and Santa Caterina at Bologna.

From the day he reached the Capuchin friary of Santa Croce at Padua, on 27 May 1919, we find him resuming again his old role of confessor. Even if he was shy, his popularity at the confessional increased remarkably. This is what we find written in the Annals of the Venetian Province about St Leopold: “In confession he demonstrated an extraordinary attraction to the highest levels of culture, a fine intuition and particularly a sense for the sanctity of life. Not only did working people flock to him but also intellectuals and aristocrats, lecturers and students from the university, secular clergy and members of religious orders.”

When in October 1923 the Capuchin superiors moved him to Fiume (Rijeka), since the friary had passed to the control of the Venetian Province, merely a week had passed from his departure. The bishop of Padua, Mgr. Elia Dalla Costa, faithfully responding to the desire of the laity, asked the Provincial Minister of the Capuchins, Fr Odorico Rosin da Pordenone, to have Fr Leopold back. So swift was Fr Odorico’s caring response that that year Fr Leopold, in complete obedience to his superiors, had to abandon the practical side of his ecumenical dream of Christian Unity and went back to Padua.

As things turned out Fr Leopold had to spend the remaining years of his life in Padua. That famous Friary of Santa Croce had the grace of witnessing the heroic example of this small and humble man, yet a giant in holiness, the Croatian Capuchin, generously administering the sacrament of confession and spiritual direction. It was on Sunday 22 September 1940, when, in the church of the same Friary, he celebrated the golden jubilee, the fiftieth anniversary of his priestly ordination. The impressive large demonstrations of appreciation shown to Fr Leopold by itself showed how deep and transforming his untiring work had been throughout those fifty years of ministry.

As his health started to deteriorate in the last months of 1940, Fr Leopold was hospitalized at the beginning of April 1942. From the medical investigations it was found that he was suffering from a tumour of the oesophagus. He returned to his friary and kept hearing confessions. On 29 July 1942 he kept administering the sacrament of confession continuously, often 12-14 hours a day, and many hours of the night in prayer.

On the following day, at dawn, July 30, as he was preparing himself to celebrated the Eucharist Fr Leopold collapsed. Immediately he taken back to his bed and the Sacrament of the Anointing of the Sick was administered to him. In a matter of a few minutes he entered his agony. His last words were: Hail Holy Queen. While raising his hands he breathed his last and passed away.

The news of his demise spread like wild fire in every corner of Padua, and a countless number of Paduans came to show their respects to the body of the confessor at the Friary of the Capuchins. His funeral was celebrated on August 1 1942 in the bigger church of Santa Maria dei Servi. After being buried in the principal cemetery, it was in 1963 that his body was put in the present Capuchin church in Padua.

How touching are the words which Pope St. John Paul II said in his homily for the canonization of St Leopold Mandić, which took place at St Peter’s Square on October 16 1983:

“What remained for St. Leopold? Whom or for what did his life serve? He was for his brothers and sisters who had lost God, love, hope. Impoverished human beings, in need of God, who called out, imploring his forgiveness, his consolation, his peace and serenity. St Leopold gave his life to these ‘poor’, offering his own sufferings and prayer for them, above all in celebrating the sacrament of Reconciliation. It was there that he lived his charism and there that his heroic virtues expressed themselves. He celebrated the sacrament of Reconciliation, carrying out his ministry as if in the shadow of Christ crucified. His gaze was set on the crucifix, hanging on the penitent’s kneeler. The Crucified was always the protagonist. ‘It is he who forgives, he who absolves!’ He who is the shepherd of the flock”

May the Lord keep giving us priests who give their lives to reconcile us with God and one another! St Leopold Mandić pray for us!

Twenty Seventh Sunday: Esther, Our Lady and the Message of Fatima

Thérèse of Lisieux of the Child Jesus and the Holy Face

Story of a Soul