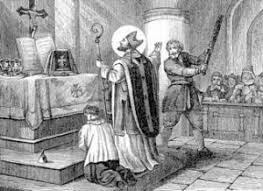 November 14th marks the memorial of Saint Lawrence O’Toole (1125 – 1180), Lorcán Ua Tuathail in the original Gaelic. Lawrence was an Irish monk, abbot and, eventually, Archbishop of Dublin, helping to further establish the Church in Ireland, in union with the Pope at the dawn of the high Middle Ages – the era of cathedrals and chapters, universities and colleges, orders and friars. He was canonized in 1225, the year that saw the birth of Thomas Aquinas. I have something of a devotion to this Celt, not only as a fellow member of his race (one grandmother was an O’Brien, the other a Shields, while my grandfathers were Meenan and Reilly), but Saint Lawrence is the patron of the ‘other’ parish in the town in which I live.

Like all saints, he lived an ascetical life, bringing his body and its wayward desires under the control of reason and grace. He never ate meat, fasted on Fridays, and drank almost no wine. But he always provided for his guests, and would join them in their feasts, hiding his own abstemiousness, sipping water that was coloured to look like wine.

Lawrence had his exterior struggles: First, with the invading Normans, who were ravaging the coastal towns. And, like Thomas, Becket, whose contemporary he was, he had his controversies with the headstrong English king, Henry II, as the latter strove to extend his dominion over all of ‘Great Britain’, including Ireland, a that tension continues into our own day. In one of those ironies of providence, a madman did try to murder Bishop O’Toole, as he prayed on the very spot in Canterbury’s great cathedral (centuries before its usurpation by the Protestants) where Becket had been martyred by minions of the king, hoping to send Lawrence to an early grave, and heavenly reward. But the good bishop poured some holy water on the wound, and not only survived the blow to the head, but continued with his Mass, right as rain, without any apparent ill-effects.

(As an aside, I too prayed on that very spot in that cathedral, usurped by the Anglicans since Henry VIII’s depredation. I managed to recite a whole Rosary, but no one, for better or worse, tried to martyr me. An opportunity missed, I suppose).

Lawrence died while on a mission to England and France, Normandy. His relics were dispersed: His grave is in France; his head was sent to England, but his heart to Ireland, were it now resides in Christ Church cathedral, whose construction he began and oversaw, but which now belongs to the Protestant ‘Church of Ireland’. Although the Protestants are not much into relics, they have kept his heart, fittingly enough. It was stolen in 2017, by thieves who thought the relic had ‘cursed their family’ causing ‘mental illness’. Quite the contrary, one would think. The sanity of the saints is what brings us back from sickness and death, of mind and body. In fact, miracles abounded soon after Saint Lawrence’s death, and likely continue to this day, if we had but a smidgen of faith, and eyes to see.

A tip led to the heart being found in a park, and now resides in its resting place, until the Christ that Lawrence loved so much should come again, and reunite all those relics in the resurrection.