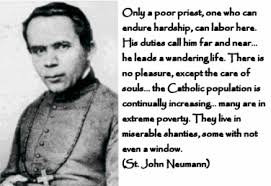 Today is the feast of Saint John Neumann – whom we should keep distinct from Saint John Henry Newman, the English Oratorian and fellow saint; as well as from John von Neumann, the great Hungarian-American mathematician and computer scientist. Today’s John Neumann was born in Bohemia, but travelled to the United States in 1836 to seek ordination since there were ‘too many priests’ in his native country (remember those days?).  Having already completed his seminary studies, he was ordained in New York city, and, after some difficult years as a diocesan priest, joined the Redemptorists for a more complete community life. The zeal, holiness and indefatigable work amongst the streams of immigrants of this diminutive priest – he stood but five foot two – with a great soul were renowned, and he was highly in demand as a confessor and director of souls, speaking at least six languages – Spanish, English, French, Italian, Dutch and, of all things, Gaelic for all those Irish immigrants. His talents were soon recognized, and Father Neumann was appointed Bishop of Philadelphia by Bd. Pius IX in 1852, where he continued his impressive apostolic work, building parishes and schools galore when the Church in America was in its infancy.  He died on the street while running errands – and he was quite likely literally running – on this day, January 5th, in 1860, just 48 years old. He did much in the time given him, more than five men in those five decades.

May this good and holy pastor intercede for all our bishops, that they receive and foster in themselves the grace and strength necessary to fulfill their office fully.