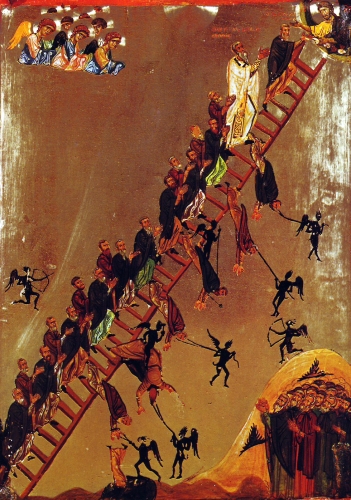 Today, March 30th, happens to be the commemoration of Saint John Climacus, the Syrian monk and mystic, of whom Father Mario Attard wrote on CI just recently.

Here is Pope Benedict XVI’s reflection on the saint, from 2009:

After 20 Catecheses dedicated to the Apostle Paul, today I would like to return to presenting the great writers of the Church of the East and of the West in the Middle Ages. And I am proposing the figure of John known as Climacus, a Latin transliteration of the Greek term klimakos, which means of the ladder (klimax). This is the title of his most important work in which he describes the ladder of human life ascending towards God. He was born in about 575 a.d. He lived, therefore, during the years in which Byzantium, the capital of the Roman Empire of the East, experienced the greatest crisis in its history. The geographical situation of the Empire suddenly changed and the torrent of barbarian invasions swept away all its structures. Only the structure of the Church withstood them, continuing in these difficult times to carry out her missionary, human, social and cultural action, especially through the network of monasteries in which great religious figures such as, precisely, John Climacus were active.

John lived and told of his spiritual experiences in the Mountains of Sinai, where Moses encountered God and Elijah heard his voice. Information on him has been preserved in a brief Life (PG 88, 596-608), written by a monk, Daniel of Raithu. At the age of 16, John, who had become a monk on Mount Sinai, made himself a disciple of Abba Martyr, an “elder”, that is, a “wise man”. At about 20 years of age, he chose to live as a hermit in a grotto at the foot of the mountain in the locality of Tola, eight kilometres from the present-day St Catherine’s Monastery. Solitude, however, did not prevent him from meeting people eager for spiritual direction, or from paying visits to several monasteries near Alexandria. In fact, far from being an escape from the world and human reality, his eremitical retreat led to ardent love for others (Life, 5) and for God (ibid., 7). After 40 years of life as a hermit, lived in love for God and for neighbour years in which he wept, prayed and fought with demons he was appointed hegumen of the large monastery on Mount Sinai and thus returned to cenobitic life in a monastery. However, several years before his death, nostalgic for the eremitical life, he handed over the government of the community to his brother, a monk in the same monastery.
John died after the year 650. He lived his life between two mountains, Sinai and Tabor and one can truly say that he radiated the light which Moses saw on Sinai and which was contemplated by the three Apostles on Mount Tabor!

He became famous, as I have already said, through his work, entitled The Climax, in the West known as the Ladder of Divine Ascent (PG 88, 632-1164). Composed at the insistent request of the hegumen of the neighbouring Monastery of Raithu in Sinai, the Ladder is a complete treatise of spiritual life in which John describes the monk’s journey from renunciation of the world to the perfection of love. This journey according to his book covers 30 steps, each one of which is linked to the next. The journey may be summarized in three consecutive stages: the first is expressed in renunciation of the world in order to return to a state of evangelical childhood. Thus, the essential is not the renunciation but rather the connection with what Jesus said, that is, the return to true childhood in the spiritual sense, becoming like children. John comments: “A good foundation of three layers and three pillars is: innocence, fasting and temperance. Let all babes in Christ (cf. 1 Cor 3: 1) begin with these virtues, taking as their model the natural babes” (1, 20; 636). Voluntary detachment from beloved people and places permits the soul to enter into deeper communion with God. This renunciation leads to obedience which is the way to humility through humiliations which will never be absent on the part of the brethren. John comments: “Blessed is he who has mortified his will to the very end and has entrusted the care of himself to his teacher in the Lord: indeed he will be placed on the right hand of the Crucified One!” (4, 37; 704).