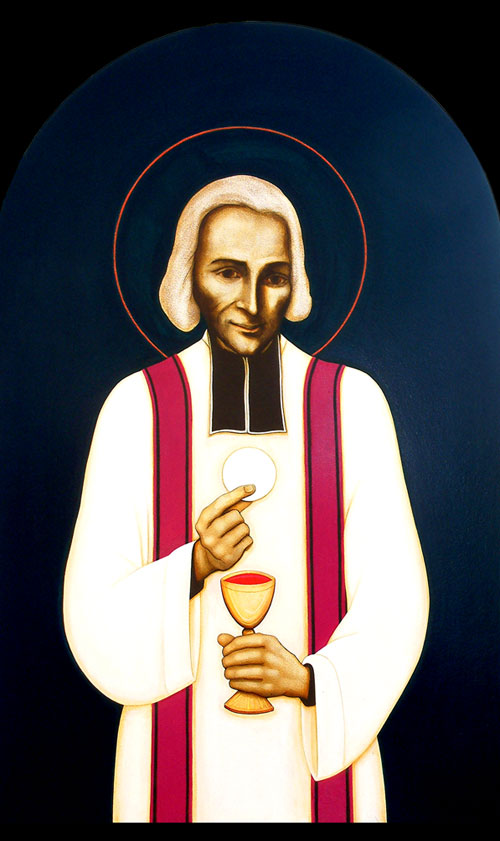 On this day, August 4th, in 1859, the world witnessed the quiet passing into eternity of a most remarkable man, a simple country priest, who lived and worked at the same parish of Ars, in northeastern France, for 41 years, never taking a holiday, nor much of a break at all. He slept little, and ate even less, totally devoted to his parish and the souls of his parishioners; when he was not saying Mass, or visiting the sick, or teaching catechism, he was hearing confessions in the sweltering heat and frigid cold in a small wooden box, with a hard wooden seat, for up to 16 hours a day.

When as a young curate he arrived in the out-of-the-way village of Ars in 1818, he asked a boy to show him the way to the parish, and that if lad did so, he would show him the way to heaven. Just what a priest should do, Père Jean-Marie Vianney ended up showing an untold number of souls the ‘way to heaven’.  Sacrificing for his flock in a way that seemed well beyond human nature, the ‘Curé d’Ars’, as he came to be known, produced miraculous spiritual fruits:  He could read souls, tell people their secret sins, and spoke with God and His Mother like they were right there.  The Devil, who appeared to the Curé, often in the form of a big, black toad whom the priest nicknamed ‘le Grappin’, was especially enraged when a ‘big sinner’ was about to arrive, lamenting that if there were but three priests like him, ‘my kingdom would be destroyed tomorrow!’.

Jean-Marie had an inauspicious beginning. He felt a call to the priesthood from his earliest days, but he had to help out on his impoverished family’s farm, and with little proclivity to academia, he seemed to have little hope. With the help of a local priest, he eventually made his way to the seminary, quite a bit older than his confreres, but by that point could not handle the Latin, so was dismissed. A brief stint conscripted into Napoleon’s vast army ended up in an unwitting ‘desertion’, with a family hiding him, after which a friendly priest, Abbé Balley offered to tutor him, in French, and Jean-Marie then took more to his studies, but far more to his prayer – he was never what an ‘intellectual’, but probably for the better. The Vicar General said that his piety would make up for his ignorance.

Pere Vianney was not so ignorant as people surmised – he had a solid grasp of moral theology to match even the ‘academics’ – and lived its truths far more than they. Sent to the backwater village of Ars, where the Faith was also ignored, the young priest soon reformed his parish, by prayer, fasting, and an utter devotion to duty – he was enraptured at Mass, and soon had people coming just to see him. His preaching, rather ordinary in the written form, but his holiness made those words shine, with people not only reflecting, but openly weeping and and repenting. And then there the priest would be, waiting in the confessional…

Soon, people flocked from all over France and beyond to seek out the soon-famed priest, with line-ups lasting three days.  The government had to put in a train station to handle all the ‘pilgrims’, a fruit of the holiness of the simple and humble Curé.  He could read souls, and miracles abounded, which Father Vianney always attributed to the intercession of the early virgin martyr, Saint Philomena, to whom he himself was greatly devoted. Other priests were envious, and signed a petition for his removal. Father Vianney added his own name, claiming that he was unworthy of his vocation.  He was always tempted to run off to a monastery to ‘weep for his sins’ – which should give us all of us pause – but the parishioners would lead him back, and he stayed faithful to the end where God had put him.  Saint Jean-Marie Vianney died peacefully on this sweltering summer day in August. He gave until the day he died, still hearing confessions until the very end, entering eternity in great joy at the age of 73 – his death mask shows his serene face – worn out in body and soul. His funeral, said by the bishop, had 300 priests in attendance, including many who had once signed the petition for his removal, along with 6000 of the faithful. To this day, his shrine at Ars, outside Lyons, attracts hundreds of thousands of pilgrims annually – well, it did, and we may hope it might again.

There are two ways the sacraments work: Ex opere operato, by the very fact of the sacraments being performed, with all the grace being present as the fruit of Christ’s work. And ex opere operantis, from the devotion of the recipient, who opens himself more or less to this grace.

In the first way, the Cure’s sacraments, his Masses and Confessions, were the same as any other priest, good, bad or indifferent.  But in the second way, the holiness of the priest can elicit a great, even a miraculous, devotion in those who receive the sacraments from his hands

Popes John Paul II and Benedict XVI, themselves holy and zealous pastors, both in their own way called for such holiness in priests, as the primary hallmark of their vocation, to devote themselves to souls without stint, to form their own souls by prayer, a spirit of sacrifice and performing the duty of the moment, without delay and grumbling. A gift-of-self in the very image of Christ.

Saint Jean-Vianney, the humble Curé d’Ars, was canonized in 1925 by Pope Pius XI, and declared the patrons saint of parish priests in 1929. In 2009, Pope Benedict XVI dedicated a Year for Priests under his patronage, describing him as a true example of a pastor at the service of Christ’s flock, and the patron of all priests, everywhere.

If the Marines get by with a few good men, look at what God can do with just one. What might happen if just a few (even two!) more followed the example of this hidden and now glorified priest, whose only desire was to serve the God he loved so much?