Following on my last post on the ‘refugee crisis’: One danger in a situation like this, especially one of its global impact, is to act purely on the basis of emotion, a gut reaction which we later regret.

Saint Thomas has an article on ‘alsmgiving’ (II-II, q.32, a.10), wherein he asks whether the ‘giving of alms’ (which we can apply to any work of charity) should be an act of reason, and he answers most definitively in the affirmative.  He states that in ‘giving alms’ we must “employ discretion, according to the varying degrees of connection, holiness and utility”, and to these he adds also, of course, ‘necessity’.

In other words, we are bound in reason, and therefore by natural law, to give alms first and foremost to those who are most connected to us (most evident in Saint Paul’s dictum that we must feed our families first before others); also, to those who are more holy (we may choose to give our money to Mother Theresa’s order rather than to a U.N. ‘charity’); and we must offer our aid on the basis of utility (those who will make use of it most effectively…There is often not much point giving money to an alcoholic, who will just spend it to aggravate his condition).

Overarching all of these is the question of necessity:  Someone who is facing death is more in need than another who is not. 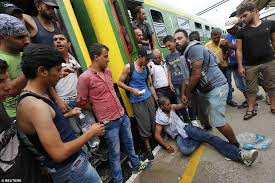 How this plays out in the tide of migrants and refugees (see my last blog for the distinction) is complex indeed, but these questions must be asked.  As one writer put it, we cannot let the whole of the Middle East into Europe and North America.  Mark Steyn also made the comment that 75% of the ‘refugees’ are young adult males.  I am not sure of the accuracy of this figure, and not even sure how they would determine it, but I suppose one could estimate.  Given its near accuracy as a given, allowing tens of thousands of restless young Muslim men into a country wholesale, all of whom will be dependent upon government (i.e., taxpayer) assistance indefinitely, is not a recipe for civil cohesion, and there are quite literally millions more behind the current tide.  Islam is by its nature segregationist, and, moderate or not, every Muslim must see a non-Muslim as an ‘infidel’. How they treat said infidel varies quite a bit, from the ISIS-head-hacking-man-burning jihadis, all the way to the friendly, but sort of distant, Muslim neighbour next door; in any case, the principle remains.  Here is Steyn quoting an interview between John Kasich (current governor of Ohio and presidential hopeful) and Sean Hannity:

John Kasich was on TV last night and Sean Hannity asked him how many of these belligerent young Muslim men posing as “fleeing refugees” America should take, and he blathered on a bit about our good hearts and putting safeguards in place to ensure that fellows with ISIS membership cards would be asked to resign first and a lot of other twaddle. And then he said limply something like, “Your families and mine both came here as immigrants, Sean.”

We should be careful painting all the refugees as opportunists, for most may well be true refugees, but as Steyn rightly replies,

An ISIS member has already been found and arrested amongst the refugees, with a box of Syrian passports.  We should keep in mind that the emigrations of the 19th and 20th centuries from Europe to America are quite different from the current emigration from the Middle East.  Countries have a right and duty to screen who gets in their borders, and individual families also certainly have the same obligation, perhaps even more so, before they take other families under their roof.  And any immigrants taken in are bound to respect the customs and rules of their hosts, not easy when Muslims, as a rule, do have a lot of affinity for our ‘customs and rules’.  As Steyn also says, we should not be bound to walk on eggshells in case we ‘offend’ certain over-sensitive Islamic sensibilities, or tolerate some of their, shall we say, non-Christian customs.  Slovakia has refused to take in any Muslims; I am not sure that this is the answer, but I understand their motive.

What I, nor it seems anyone else, has is the answer to the refugee crisis, except that we must strive to alleviate the root of the problem, and do what we can to help ameliorate things in the Middle East, which means defeating ISIS, which, as I wrote earlier, may mean another Crusade, whether that be religious, military or, as the original Crusades, both.