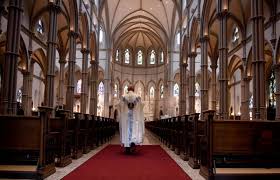 O, how the mighty have fallen! Such was the lament over King Saul, who began with great promise, head and shoulders above the rest of men, reduced to having his footman kill him, as he lay wounded.

Quebec was once a great society, embodying ‘Catholicism’ in a way few societies in history ever have, with a thriving Church, parochial and family life, and one of the highest birthrates in the world. Until the Sixties, that is, when it all began to crumble in what is euphemistically called le revolution tranquil – the ‘quiet – or, more accurately, the peaceful – revolution’, as Quebec lost the Faith. Mass attendance has since dropped to near the vanishing point, and les Quebecoises have effectively stopped having children.

The Church, once the source of culture, custom, morals and manners, running schools and hospitals on a solid foundation of morality and truth, has been reduced to a shadow of her former self, a ghost in a sclerotic, bankrupt socialist regime.

And even that ghost may be about to depart, as the Quebec government, right on the eve of Christmas, has barred entrance to churches, and access to the sacraments, to those without a ‘vaxx-pass’, with attendance even then limited to 20. All without deigning to consult the bishops, never mind ask them. Double (or triple?) vaccination is now the new, secular baptism.

This may well kill whatever is left of ‘the Church’ in la belle province. There are still countless glorious edifices, dotting the bucolic countryside, many of which I have visited – but they are relics of the age of Faith, maintained by the government as nostalgic museum pieces. One is supposed to give a donation upon entrance; a fee, if you will, to keep up the potemkin facade.

I write ‘may well’, for there is always hope. The Church is not an earthly institution, but a heavenly and divine one, the Mystical Body of Christ Himself, the Second Person of the Blessed Trinity, with all the infinite power that belong thereto.

I was heartened to read the response of my own bishop, who has a number of parishes in Quebec, even if most of the Pembroke diocese is on the Ontario side:

Dare to challenge your government representatives to change this latest law which in fact oversteps their role and duty in our society. Their role is earthly, and we recognise that it is God Himself who has entrusted them with this responsibility, but ours is heavenly, for Christ Himself entrusts us with the spiritual stewardship of His Kingdom. Give to Caesar what is Caesar’s, and to God what is God’s, our Master and Saviour has taught us.

Well put, as far as it goes, but a pinch or two of the fiery, uncompromising spirit of Athanasius or Chrysostom might be in order. I doubt another letter writing campaign to our ‘government representatives’ will do much good. We’re way beyond that, as the very rule of law breaks down, and directives are issued without due process. People are losing their jobs, their homes, and now their right to worship and the spiritual lifeblood of the sacraments, to these unjust, disproportionate, totalitarian ‘vaxx mandates’. We all need to draw a line in the sand before it’s too late, if it’s not already. The State had, and has, no right to dictate who can or cannot enter a church, nor even what goes on inside churches. Nor should their apparatchiks be allowed to march inside churches for random ‘inspections’, unless they’re there for the right reasons – to pray and humble themselves before their Creator and Saviour. I’d love to see Quebecers ignore this damnable diktat and flood to Midnight Mass, like it was 1921 and not 2021 – not likely, but I’d still enjoy the sight. And so, I presume, would God.

Might the people of Quebec still find the mettle of their forefathers – and their fearless foremothers – bred by the Faith into their very bones?

As Saul sulked fearfully in the background, already on his way to his sorrowful end, he watched as the young David rushed into the field of battle against the apparently invincible smirking, taunting Goliath: “Am I a dog, that you come to me with sticks?” And the Philistine cursed David by his gods…”Come to me, and I will give your flesh to the birds of the air and to the beasts of the field”

But David, with but his sling, cried out:  The LORD saves not with sword and spear; for the battle is the LORD’S and he will give you into our hand.

Just so. Courage, mes freres.  The truth of all ‘this’ is being revealed more clearly with each passing day, as the narrative of the modern Goliath falls apart, the lies and deceit exposed for what they are, like the strutting, naked emperor.

We need a true revolution, which I hope is a peaceful one. Whatever may unfold in God’s good providence, and whatever sufferings or surprises are in store, do what you are able, and even beyond what you think are able, to defend your rights, your family, your Church, in truth, in freedom, to the end. God will provide the grace. The battle is His, and we must but stand our ground.