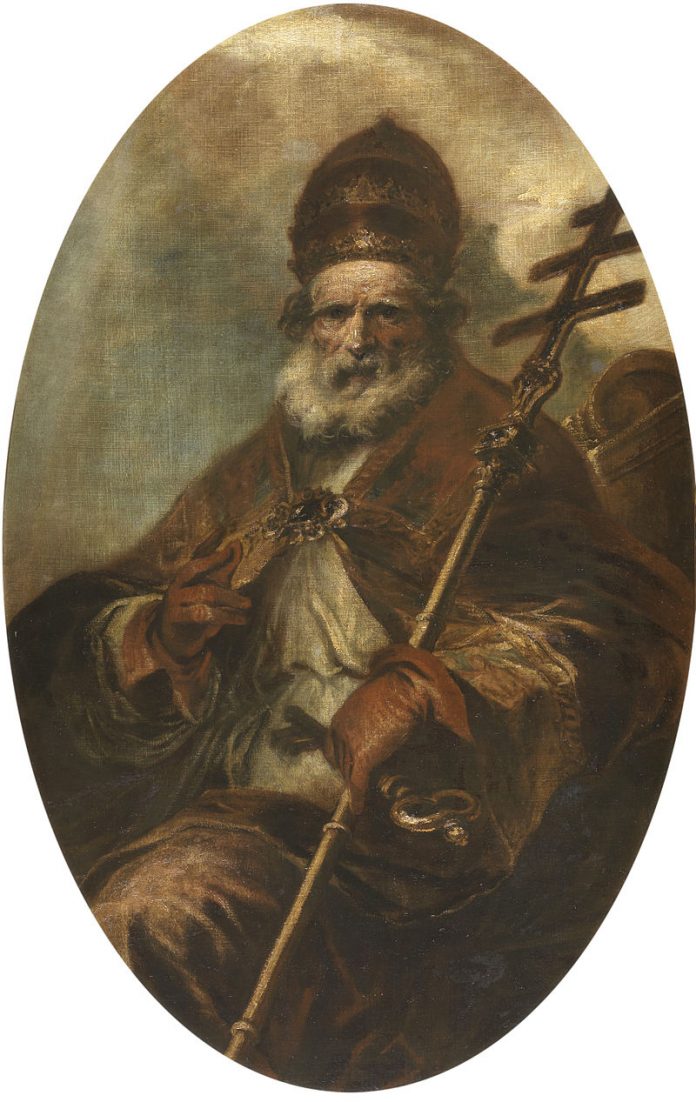 Pope Saint Leo, the first pontiff to earn the title ‘the Great’, reigned from 440 until his death on this day in 461, was known for many things.  With his wise mind, his magnanimous soul and zeal, he helped solidify the papacy, and the role of the ‘Holy Father’, which would be further clarified by subsequent pontiffs, not least Gregory, also called ‘Magnus‘, who reigned in the next century just before the inaccurately-termed ‘dark ages’ (+604). (The other official ‘great’ Pope was Nicholas I, who reigned from 858 – 867)

As Leo put it in his usual clear and direct manner: The care of the universal Church should converge towards Peter’s one seat, and nothing anywhere should be separated from its Head.

Leo shored up the ancient papal primacy, defending the Church from the errors of the Pelagians – who denied the efficacy of grace – and the Priscillianists – who taught that there was an ascetical, holy ‘church’, of which they were of course the prime examples, within a worldly, unredeemed one (a recurring tendency in any age).

Pope Leo, apparently with divine help, in 452 turned back Attila the Hun from razing Rome to the ground, thus saving the eternal city and the centre of the universal Church. One report has it that the pagan marauder – who demanded the emperor’s daughter, Honoria, as a ‘dowry’ – saw a massive heavenly figure with a sword, standing behind the Pope. Modern historians posit more mundane causes. But certainly the personality and holiness of the Pope played a role in sparing the city (and the royal princess) from being defiled.

Perhaps in theological history, Leo is best known for his clarity and precision in determining for all time the Church’s teaching on the question of ‘who was (or is) Christ?’, wrangled over in Councils and synods since the time of Christ Himself: Who do men say that I am?.  It was at the Council of Chalcedon in 451, against the monophysites (who claimed that Christ’s human nature ‘melded’ or ‘disappeared’ into the divine, and whose ‘robber council’ in Ephesus in 449 the Pope condemned) that Leo presented his famous ‘Tome’. This solidified that the two natures of Christ, divine and human, were united in the one divine Person (or hypostasis) of Christ existed. Hence the ‘hypostatic union’. In the words of the Council which adopted Leo’s teaching:

Pope Leo, one of only two Popes to have been declared a Doctor of the Church (the other being Gregory) signifies the authority and centrality of the papacy, the Vicar of Christ, without which there would be no visible earthly link to Christ, and, hence, no Church (regardless of how individuals fulfill that office, with all of their own human imperfections, something Leo would be amongst the first to admit).

And as we meditate on the Incarnation of the Second Person of the Trinity, the greatest, most significant historical event ever to have occurred in the history of Man, it would profit us greatly to ponder this mystery anew, not least as we approach the end of this liturgical year, awaiting not only the birth of the Christ child, but also preparing for His final coming, when the King of the Universe will ask us again, as He asked His first Apostles, but perhaps in a different tense: ‘who did you say that I am?’.