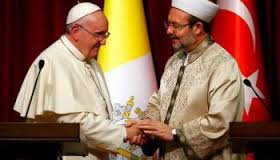 I suppose Pope Francis is correct that we should not strictly identify Islam with terrorism, but a lot depends on how one defines ‘terrorism’.  What are we to make of Islam’s decree of a death sentence on apostasy and blasphemy?  Would that not count as ‘terrorism’, nothing else but coercion by violence?  One does wonder.  The Pope further claims that all religions, even Catholicism, have ‘fundamentalist’ groups that (as he implies) are just as violent.  Does the Holy Father really think that an Italian killing his mother -in-law (is that a problem in Italy?) is somehow equivalent to the Islamic terrorists murdering countless victims?  How many Catholic, or even Episcopalian, terrorist cells are there out there spreading the faith by fire and sword?

I suppose one could find some distant analogy in any sort of murder, but, as one commentator put it, when a Muslim commits terrorism, a strong argument can be made that he is obeying the Koran; when a Catholic does it, insofar as Catholics commit terrorism, he is most certainly disobeying the Church.  As the Pope declares of Muslims, he knows “how they think.  They look for peace, encounter”.

I am not sure what sort of ‘encounter’ the Pope would expect if he were to saunter around in his cassock and pectoral cross in Mecca, like his namesake of old.

And is it really true that terrorism is caused by poverty and exclusion?  As the Pope declared, “I ask myself how many young people that we Europeans have left devoid of ideals, who do not have work. Then they turn to drugs and alcohol or enlist in ISIS.

Hmmm.  I am also not sure I would put drugs, alcohol and ISIS as equivalent in the same sentence. Yes, they are all ‘escapes’ of some sort, but ISIS and its ideology attract a whole lot of very successful and talented people, who do not enlist as an escape, but as an ideal.

It is in this light that we may take some exception to the Holy Father’s recent comments that, although this is a ‘war’, it is not a ‘war of religion’.  I am not sure what else it is.  The jihadists certainly seem to be acting in the name of religion, and they are convinced that they are, if nothing else, ‘religious’.  As Chesterton once wrote, religion is really the only valid basis for a just war, to fight for what it means to be a culture, a society and people, against those who would hell-bent on destroying your ‘culture, society and people’.  For what else would one be willing to die?

No, not all religions are equal, nor are they all equal in their propensity for violence.  In fact, some, like the pigs in Animal Farm, are a lot more equal in that department than others.

Another World Youth Day has wrapped up, and I hope it bears fruit, but I always have my reservations, based on what little experience I have with these mega-youth events, much show and not-so-much substance.  But I suppose they do good in bringing youth together to share their faith.  What this WYD has in it favour is that there is something intrinsically ‘Catholic’ about Poland, as I pleasantly discovered in my pilgrimage there last May.  Shrines, churches, Mass attendance abound, and the international youth may get some idea that a ‘Catholic’ country can actually exist.   Yes, secularism is making its inroads, but there is almost no influence of Islam, as of yet.  Here is hoping that Poland can resist the vitiating and weakening effects of the neo-agnosticism, which makes a culture and a country easy fodder for all sorts of absurdities and evils, as we have discovered in the rest of Europe, now in our own Canada and the United States. 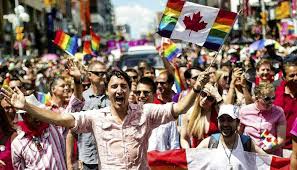 Witness, but one example amongst many, Justin Trudeau ‘and family’ marching in Vancouver’s ‘Gay Pride’ parade.  What a spectacle and an embarrassment in a march that is neither gay nor proud.  Trudeau grins and waves while Canada burns.  Point in case:  Even part-time work is nearly impossible to get in the former-economic powerhouse of Calgary.  Empty office buildings, giving away free rent; house values flat and falling; no end in sight for the oil glut, and now an aggressive and ill-conceived carbon tax.

‘It is by the labour of working men that states grow rich’ wrote Leo XIII in 1891, and his words ring true still:  If working men do not work, then there is no wealth in a nation. By the way he prances about, Trudeau seems to think that we can subsist on inclusivity and sunny ways; but these, besides their other limitations, do not put food on the table, nor do they a country build.  I wonder how long before the fate of Brazil falls upon us.  As Maggie Thatcher so prophetically wrote, ‘the problem with socialism is that you eventually run out of other people’s money’.  So let Justin and Sophie and their progeny dance while they may, for sunny days last but a time…

Speaking of which, time to enjoy some of this summer sun, before this secular holiday weekend passes us by.  A joyous August to all….