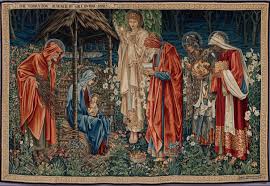 (In Canada, and other locales, the Solemnity of the Epiphany is moved to the following Sunday, for ‘pastoral reasons’. But in the Church universal, the feast falls on January 6th, after the twelve days of Christmas. So a joyful one, to one and all. We will post more on Sunday, but for now, enjoy this last Epiphany homily of Pope Benedict XVI, requiescat in pace, back in January, 2013).

EUCHARISTIC CELEBRATION
ON THE SOLEMNITY OF THE EPIPHANY OF THE LORD

HOMILY OF HIS HOLINESS BENEDICT XVI

For the Church which believes and prays, the Wise Men from the East who, guided by the star, made their way to the manger of Bethlehem, are only the beginning of a great procession which winds throughout history. Thus the liturgy reads the Gospel which relates the journey of the Wise Men, together with the magnificent prophetic visions of the sixtieth chapter of the Book of Isaiah and Psalm 71, which depict in bold imagery the pilgrimage of the peoples to Jerusalem. Like the shepherds, who as the first visitors to the newborn Child in the manger, embodied the poor of Israel and more generally those humble souls who live in deep interior closeness to Jesus, so the men from the East embody the world of the peoples, the Church of the Gentiles – the men and women who in every age set out on the way which leads to the Child of Bethlehem, to offer him homage as the Son of God and to bow down before him. The Church calls this feast “Epiphany” – the appearance of the Godhead. If we consider the fact that from the very beginning men and women of every place, of every continent, of all the different cultures, mentalities and lifestyles, have been on the way to Christ, then we can truly say that this pilgrimage and this encounter with God in the form of a Child is an epiphany of God’s goodness and loving kindness for humanity (cf. Tit 3:4).

Following a tradition begun by Pope John Paul II, we celebrate the feast of the Epiphany of the Lord also as the day when episcopal ordination will be conferred on four priests who will now cooperate in different ways in the ministry of the Pope for the unity of the one Church of Jesus Christ in the multiplicity of the Particular Churches. The connection between this episcopal ordination and the theme of the pilgrimage of the peoples to Jesus Christ is evident. It is the task of the Bishop in this pilgrimage not merely to walk beside the others, but to go before them, showing the way. But in this liturgy I would like to reflect with you on a more concrete question. Based on the account of Matthew, we can gain a certain idea of what sort of men these were, who followed the sign of the star and set off to find that King who would establish not only for Israel but for all mankind a new kind of kingship. What kind of men were they? And we can also ask whether, despite the difference of times and tasks, we can glimpse in them something of what a Bishop is and how he is to carry out his task.

These men who set out towards the unknown were, in any event, men with a restless heart. Men driven by a restless quest for God and the salvation of the world. They were filled with expectation, not satisfied with their secure income and their respectable place in society. They were looking for something greater. They were no doubt learned men, quite knowledgeable about the heavens and probably possessed of a fine philosophical formation. But they desired more than simply knowledge about things. They wanted above all else to know what is essential. They wanted to know how we succeed in being human. And therefore they wanted to know if God exists, and where and how he exists. Whether he is concerned about us and how we can encounter him. Nor did they want just to know. They wanted to understand the truth about ourselves and about God and the world. Their outward pilgrimage was an expression of their inward journey, the inner pilgrimage of their hearts. They were men who sought God and were ultimately on the way towards him. They were seekers after God.

Here we come to the question: What sort of man must he be, upon whom hands are laid in episcopal ordination in the Church of Jesus Christ? We can say that he must above all be a man concerned for God, for only then will he also be truly concerned about men. Inversely, we could also say that a Bishop must be a man concerned for others, one who is concerned about what happens to them. He must be a man for others. But he can only truly be so if he is a man seized by God, if concern for God has also become for him concern for God’s creature who is man. Like the Wise Men from the East, a Bishop must not be someone who merely does his job and is content with that. No, he must be gripped by God’s concern for men and women. He must in some way think and feel with God. Human beings have an innate restlessness for God, but this restlessness is a participation in God’s own restlessness for us. Since God is concerned about us, he follows us even to the crib, even to the Cross. “Thou with weary steps hast sought me, crucified hast dearly bought me, may thy pains not be in vain”, the Church prays in the Dies Irae. The restlessness of men for God and hence the restlessness of God for men must unsettle the Bishop. This is what we mean when we say that, above all else, the Bishop must be a man of faith. For faith is nothing less than being interiorly seized by God, something which guides us along the pathways of life. Faith draws us into a state of being seized by the restlessness of God and it makes us pilgrims who are on an inner journey towards the true King of the world and his promise of justice, truth and love. On this pilgrimage the Bishop must go ahead, he must be the guide pointing out to men and women the way to faith, hope and love.

Faith’s inner pilgrimage towards God occurs above all in prayer. Saint Augustine once said that prayer is ultimately nothing more than the realization and radicalization of our yearning for God. Instead of “yearning”, we could also translate the word as “restlessness” and say that prayer would detach us from our false security, from our being enclosed within material and visible realities, and would give us a restlessness for God and thus an openness to and concern for one another. The Bishop, as a pilgrim of God, must be above all a man of prayer. He must be in constant inner contact with God; his soul must be open wide to God. He must bring before God his own needs and the needs of others, as well as his joys and the joys of others, and thus in his own way establish contact between God and the world in communion with Christ, so that Christ’s light can shine in the world.

Let us return to the Wise Men from the East. These were also, and above all, men of courage, the courage and humility born of faith. Courage was needed to grasp the meaning of the star as a sign to set out, to go forth – towards the unknown, the uncertain, on paths filled with hidden dangers. We can imagine that their decision was met with derision: the scorn of those realists who could only mock the reveries of such men. Anyone who took off on the basis of such uncertain promises, risking everything, could only appear ridiculous. But for these men, inwardly seized by God, the way which he pointed out was more important than what other people thought. For them, seeking the truth meant more than the taunts of the world, so apparently clever.

How can we not think, in this context, of the task of a Bishop in our own time? The humility of faith, of sharing the faith of the Church of every age, will constantly be in conflict with the prevailing wisdom of those who cling to what seems certain. Anyone who lives and proclaims the faith of the Church is on many points out of step with the prevalent way of thinking, even in our own day. Today’s regnant agnosticism has its own dogmas and is extremely intolerant regarding anything that would question it and the criteria it employs. Therefore the courage to contradict the prevailing mindset is particularly urgent for a Bishop today. He must be courageous. And this courage or forcefulness does not consist in striking out or in acting aggressively, but rather in allowing oneself to be struck and to be steadfast before the principles of the prevalent way of thinking. The courage to stand firm in the truth is unavoidably demanded of those whom the Lord sends like sheep among wolves. “Those who fear the Lord will not be timid”, says the Book of Sirach (34:16). The fear of God frees us from the fear of men. It liberates.