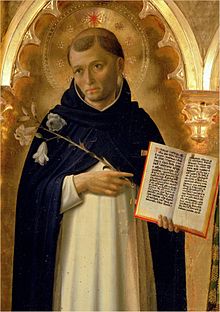 Last week I presented the luminous figure of Francis of Assisi; today I want to talk about another Saint of the same period who made a fundamental contribution to the renewal of the Church of his time: St Dominic, the Founder of the Order of Preachers, also known as Dominican Friars.

His successor at the head of the Order, Bl. Jordan of Saxony, gives a complete picture of St Dominic in the text of a famous prayer: “Your strong love burned with heavenly fire and God-like zeal. With all the fervour of an impetuous heart and with an avowal of perfect poverty, you spent your whole self in the cause of the Apostolic life” and in preaching the Gospel. It is precisely this fundamental trait of Dominic’s witness that is emphasized: he always spoke with God and of God. Love for the Lord and for neighbour, the search for God’s glory and the salvation of souls in the lives of Saints always go hand in hand.

Dominic was born at Caleruega, Spain, in about 1170. He belonged to a noble family of Old Castile and, supported by a priest uncle, was educated at a famous school in Palencia. He distinguished himself straight away for his interest in the study of Sacred Scripture and for his love of the poor, to the point of selling books, that in his time were a very valuable asset, in order to support famine victims with the proceeds.

Ordained a priest, he was elected canon of the Cathedral Chapter in Osma, his native diocese. Although he may well have thought that this appointment might bring him a certain amount of prestige in the Church and in society, he did not view it as a personal privilege or as the beginning of a brilliant ecclesiastical career but, rather, as a service to carry out with dedication and humility. Are not a career and power temptations from which not even those who have a role of guidance and governance in the Church are exempt? I recalled this a few months ago during the consecration of several Bishops: “We do not seek power, prestige or esteem for ourselves…. We know how in civil society and often also in the Church things suffer because many people on whom responsibility has been conferred work for themselves rather than for the community” (16 September 2009).

The Bishop of Osma, a true and zealous Pastor whose name was Didacus, soon spotted Dominic’s spiritual qualities and wanted to avail himself of his collaboration. Together they went to Northern Europe, on the diplomatic missions entrusted to them by the King of Castile. On his travels Dominic became aware of two enormous challenges for the Church of his time: the existence of people who were not yet evangelized on the northern boundaries of the European continent, and the religious schism that undermined Christian life in the South of France where the activity of certain heretical groups was creating a disturbance and distancing people from the truth of the faith. So it was that missionary action for those who did not know the light of the Gospel and the work of the re-evangelization of Christian communities became the apostolic goals that Dominic resolved to pursue.