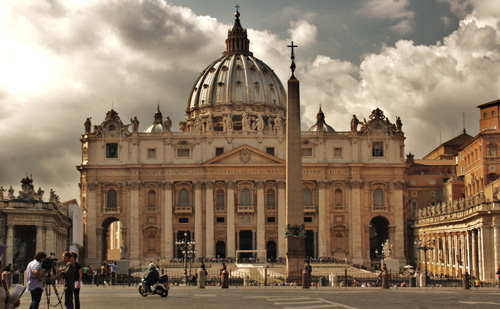 Born on 4 October 1542 in Montepulciano near Siena, he was the nephew, on his mother’s side, of Pope Marcellus II. He had an excellent formation in the humanities before entering the Society of Jesus on 20 September 1560. His philosophy and theology studies, at the Roman College in Padua and at Louvain, focused on St Thomas and the Fathers of the Church. They were crucial to his theological orientation.

He was ordained a priest on 25 March 1570 and for a few years was professor of theology at Louvain. Later, summoned to Rome to teach at the Roman College, he was entrusted with the chair of apologetics. In the decade in which he held it (1576-1586), he compiled a course of lessons which subsequently formed the Controversiae [Controversies], a work whose clarity, rich content and mainly historical tone earned it instant renown.

The Council of Trent had just ended and in the face of the Protestant Reformation, the Catholic Church was impelled to reinforce and confirm her identity. Bellarmine’s action fitted into this context. From 1588 to 1594 he was first spiritual director of the Jesuit students at the Roman College — among whom he met and gave direction to St Aloysius Gonzaga — then religious superior.

Pope Clement VIII appointed Fr Bellarmine Papal Theologian, consultor to the Holy Office and rector of the College of Confessors at St Peter’s. His short catechism, Dottrina cristiana [Christian doctrine] dates back to the two-year period 1597–1598. It was one of his most popular works.

Pope Clement VIII created him a cardinal on 3 March 1599 and on 18 March 1602 he was appointed Archbishop of Capua. He received episcopal ordination on 21 April that same year. In the three years in which he was a diocesan bishop, he distinguished himself by his zeal as a preacher in his cathedral, by his weekly visits to parishes, by three Diocesan Synods and by a Provincial Council which he founded.

After taking part in the Conclaves that elected Pope Leo XI and Pope Paul V, he was called to Rome again, where he became a member of the Congregations of the Holy Office, of the Index, for Rites, for Bishops and for the Propagation of the Faith. He also had diplomatic responsibilities in the Republic of Venice and in England, to defend the rights of the Apostolic See.

In his last years he composed various books on spirituality in which he concentrated the results of his annual spiritual exercises. Christian people today still draw great edification from reading them. He died in Rome on 17 September 1621. Pope Pius XI beatified him in 1923, canonized him in 1930 and proclaimed him a Doctor of the Church in 1931.

St Robert Bellarmine carried out an important role in the Church of the last decades of the 16th century and the first of decades of 17th. His Controversiae were a reference point, still valid, for Catholic ecclesiology on questions concerning Revelation, the nature of the Church, the sacraments and theological anthropology. In them the institutional aspect of the Church is emphasized because of the errors that were then circulating on these issues.

Nevertheless, Bellarmine also explained the invisible aspects of the Church as the Mystical Body and illustrated them with the analogy of body and soul, to the point that he described the relationship between the Church’s inner riches and the external aspects that enable her to be perceived. In this monumental work that endeavours to organize the theological controversies of that time, he avoids any polemical and aggressive approach in speaking of the ideas of the Reformation. Instead, using the arguments of reason and the Tradition of the Church, he illustrates the Catholic doctrine clearly and effectively.

Yet his inheritance consists in the way in which he conceived of his work. Indeed, the burdensome offices of governance did not prevent him from striving daily for holiness, faithful to the demands of his own state as a religious, priest and bishop. From this fidelity came his commitment to preaching assiduously. Since as a priest and bishop he was first and foremost a pastor of souls, he felt it was his duty to preach diligently. He gave hundreds of sermones — homilies — in Flanders, Rome, Naples and Capua, during liturgical celebrations.