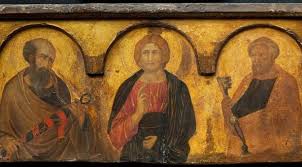 A blessed solemnity of Saints Peter and Paul to all our readers, a venerable feast that goes back to the very origins of the Church, commemorating the two human pillars upon which the nascent Mystical Body was built, with Christ, of course, being the cornerstone.

In the midst of our rejoicing, we should pray for our current Holy Father, Pope Francis who, with all his own, shall we say, ‘humanness’, must carry the weight of the Church, and account for his own papacy before Christ when he shuffles off this mortal coil, as did Peter and Paul, and as will we all.   We can hope that grace elevates, perfects, heals and purifies our own weaknesses, as Saint Paul with his ‘thorn in the flesh’ and Peter with his abject and humiliating denials.  God can work with and through anything, if we but allow Him.

While we’re at it, we should keep our bishops and priests in our thoughts and intercessions, as they fulfill their own vocations as ‘alteri Christi‘, ‘other Christs’, and they must share all of the joys and sorrows of the same path that the Son of God took to Calvary.

On that note, it seems curious that on this day that the Australian judicial system decided to lay official charges against George Cardinal Pell, whom the Pope has put in charge of financial reform of the Vatican, itself apparently in a lot of difficulty (see my post from yesterday).

The 76 year-old Cardinal, known for his conservatism and orthodoxy, has most vociferously and adamantly denied any wrongdoing, and the charges, what little we know of them, seem vague and inchoate. The officials describe them as ‘historical’, which in this case does not mean ‘momentous’, but rather that they go way back in time, to the 70’s, it seems.  Not much is being revealed at present, but from initial reports his accusers are apparently in their 40’s, which would put them as tiny tots back at the dawn of disco. I wonder, and one can only hope the truth wins out.  Memory is a fickle thing, and calumny diabolical.  In fact, the Hebrew term Satan literally means ‘accuser’.  Although in these sorts of things the accusation itself is part of punishment, we can pray that the Cardinal by the grace of God finally gets a chance to clear his name, as he says.