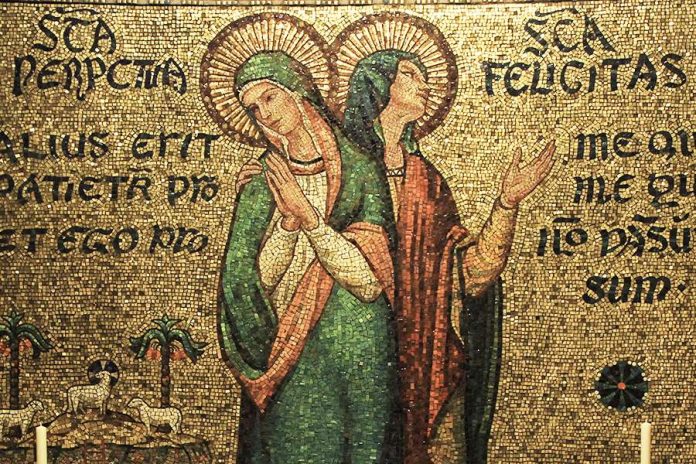 It would be remiss of me not to mention today also as the memorial of Saints Perpetua and Felicity, the account of whose martyrdom in 203, under the reign of Setpimius Severus is one of the most vivid and authentic, penned in the first person by none other than Perpetua herself.

Both Perpetua (a noblewoman) and Felicity (a slave) were mothers, who refused to renounce their faith, and went to their death by the wild beasts and the sword, along with a number of others, a sacrifice that beggars the imagination. Perpetua gave her child up to be raised by relatives, while Felicity gave birth while in prison; she was in fact concerned that she would not be martyred, for the Romans, to some degree to their credit, refused to put to death a pregnant woman (unlike modern barbaric Canada, which offers the unborn no rights at all, except at the whim or, pardon me, choice of the mother).

The deaths of these martyrs signifies in a very powerful way that we are not ultimately made for this life, but for the next, and it is only in light of eternity that all the travails, joys, trials and hopes of this transitory existence make sense. They looked forward to their martyrdom, bitten and clawed by wild lions and cows (yes, I know), before being run through with Roman steel, something that I for one would find difficult. With Thomas More, I, on my own, do not consider myself the stuff of which martyrs are made.

But with God all things are possible, and all things real, not least eternal bliss with Him in heaven.