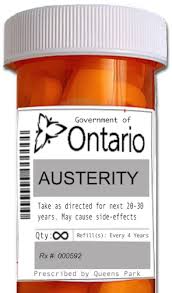 I met an acquaintance of mine recently in one of local stores (of course, government run) that sells liquid cheer, to refresh the weary soul after a long Lent.  He was there to buy a blend of Canadian Rye Whiskey, voted last December by a connoisseur as the ‘best whiskey in the world’.  As a born Scotsman, I was skeptical then, and am skeptical now.  A Canadian Rye beating a single malt Scotch?  What has the world come to?  Perhaps I will visit said friend over the Easter season for a wee dram, or whatever it is one calls a sip or two of the mapley-Canadian stuff.

We also got talking about the economy, not at my urging, but his.  He is a local tradesman, and is realizing the pinch put upon the average Canadian by the unbelievable debt load we collectively carry.  An article by the level-headed Kelly McParland claims that the debt alone sucks $1 billion per month out of taxpayer’s pockets, or one million dollars per hour, if you prefer.  That’s a fast debt.  We are truly in uncharted and one might say deranged financial waters here.

One huge piece of this growing financial burden is our health care system, theoretically ‘free’, but of course, paid for by us all, and by our descendants in perpetuum.  The Ontario Health Minister himself is warning that physicians are too ungoverned in their compensation. The average salary of a doctor is $360,000 per annum, with some, primarily specialists, pulling in several times this generous amount. I was surprised to learn that there is no limit to how much any physician can bill the government. To add to this, a recent article attests that physicians also receive compensation (in various forms) for prescribing drugs from big-pharma, although how much they will not say.

I am not sure what physicians should be paid, but, whatever one argues, the current system is unsupportable.  One would think that as a highly vocational career dedicated to the health and well-being of their fellow citizens, physicians (along with nurses, teachers, politicians and so on) should not be in it for the money.  To be fair, many of them have to pay office expenses out of their salary (my own father is a retired physician), but many are also moving away from that model, towards health-care consortia, run by striclty-controlled insurance programs, in which doctors can work as much, or as little, as they want.

Ponder:  With that annual salary as an average, quick math tells us that a doctor can work one-third of the time, and still make a very healthy middle-class income.  Add to this that in a few years most of our physicians will be female (they currently constitute about 58% of medical students and climbing).  Although I prefer a male medical man for my own fortunately-as-yet-rare medical needs, I have no problem in theory with physicians of the fairer sex.  But unless they choose to dedicate their lives to their chosen vocation, foregoing marriage and motherhood, there is not much likelihood that they will work full time.  This would not be so bad if the government did not strictly limit how many physicians can be educated and licensed each year. Add to this that the system allows, even incentivizes, would-be patients to visit physicians for expensive consultations for every ache-and-pain, real or imagined, physical or psychological, that ails them.  It is small wonder, therefore, that people have trouble ‘finding a doctor’, or getting an appointment with one even if they can.  I just heard on the radio that there can be up to a year’s wait to see a pediatric psychiatrist, In the midst of all this, hospitals, which unlike the government do have real budgets, are laying off nurses and staff, and cutting services left, right and centre, trying desperately to hold the line. I am sure that many of you have your own horror stories of our modern medical ‘utopia’.  Just try visiting an emergency ward anywhere near an urban centre.

We are a long way from the religious Sister-nurses who built and staffed most of the hospitals across this fair land, and the dedicated doctors who made middle-of-the-night house calls.  Now these same hospitals are funded by the (theoretically) all-you-can-eat buffet called ‘Medicare’ put in place in the heady and money-no-object Sixties, run by professional administrators, with parking lots filled with Beemers, Mercs and Audis, oh my.  But how long that false idealism can survive is up in the air. Medicine is already the primary expense in Canada, draining a majority of our financial resources, most of that in impressive salaries, along with the ever-more expensive technologies to keep an ageing and ever-more sickly populace alive.  Surely there must a limit to all of this unrealistic largesse.  One need not have a vivid and conspiratorial imagination to wonder how much of the current enthusiasm for euthanasia is financially driven, to rid ourselves of costly patients (but more on that later).

All of this is part of a larger trend as we move under our two Liberal majority governments ever further towards full and unbridled socialism.  Not only is this fatal for the economy, for, violating subsidiarity, the government does most things far less efficiently than a local body can, with a vast waste of money and resources, but it is also, and more foundationally, bad for freedom, for the more things the government ‘takes over’, the more things it controls by public coercive law.  And one does not need a medical degree to realize that ever since the government has taken over health care, it has told us more and more what to do with our bodies.  From bike helmets, to smoking, drinking, exercising, risk-taking, choice of food and so on and on, the State will legislate more and more what we can, and cannot, do, all at our expense, of course. We are paying to become slaves of our governmental masters, while the very debt is limiting our, and our children’s children’s, economic freedom.  The Servile State is in full swing, as predicted by Belloc.

But the current debacle was foreseen even a hundred years before the acerbic English author, by the ever-insightful Alexis de Tocqueville in his tour of America way back in 1831:

The return to fiscal sanity is going to be a long and difficult one, I fear, especially as we are all addicted to Trudeaupian Liberal largesse, now in its third generation.  But it is one we must tread, if our health care system, to say nothing of our society, is to survive.

In the meantime, a very joyous Easter to one and all!   Christus surrexit vere, alleluia!