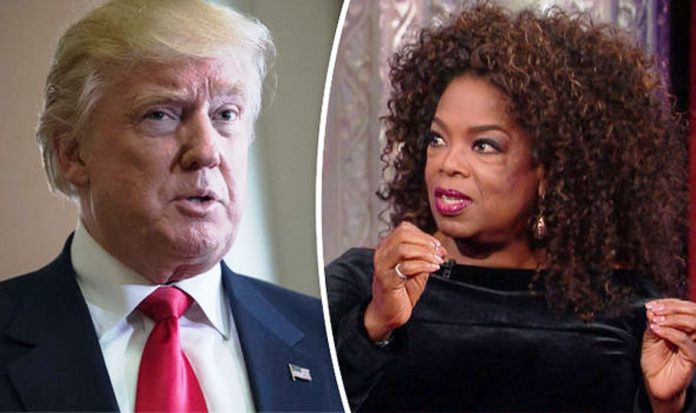 Oprah Winfrey’s epic speech at the Golden Globe Awards is already old news but her star power is not.

The question remains: will she run against Donald Trump in 2020?

The possibility was raised during the gala evening that saw female stars turn out in cleavaged black and amidst messages of solidarity with women who’ve suffered sexual abuse at the hands of work colleagues. All perfectly timed to console the Progressives around the western world who are in near hysteria over their failure to dislodge Trump from the Oval Office.

In their minds, the politically incorrect billionaire should never have been president. He should never have been able to defeat 16 rivals for the Republican nomination. Nor should he ever have defeated their Democratic nominee, Hillary Clinton. Never mind that Clinton rarely showed up for sparsely attended public appearances while Trump routinely filled stadiums with tens of thousands of enthusiastic supporters.

But neither – in their minds at least – should Trump have survived that now-falling-apart scheme by Democrats to link him to an implausible and nebulous plot with the Russians to steal the election. An election that 90% of establishment voters – and the media – were convinced Clinton would win in a landslide.

Which means that a host of powerful Democrats, led by the Clintons – along with members of several federal institutions – are now facing potential indictments for widespread corruption, beginning with the well-documented financial chicanery surrounding the Clinton Foundation and other related interests.

Yet a full year after Trump’s election, the Clintonistas remain in denial. In their minds, none of this should be happening. Nor should Trump be fulfilling his election promise to “drain the Swamp” – that is, exposing and excising the vast corruption in Washington that voters have long known about and that the Washington establishment and mainstream media have long shielded so solicitously. Including former president Barack Obama’s stealthy push towards a socialist state via a redistributionist agenda of tax increases, federalizing health care, piling on massive new debt and layers of more regulation, zero-interest rates, neo-socialist regulatory appointments, expansionary eligibility for entitlements, constant anti-free-market propaganda and weaponizing federal agencies including the IRS, DOJ, EPA, the FISA court and possibly the FBI in such a manner as to intimidate any of his government’s enemies.

All of which has left the Democrats apoplectic over the loss of their carefully installed tyrannies and desperate to eradicate Trump, so they can restore their political power and remove the threat of criminal charges now hanging over the heads of so many government shysters, pickpockets and fraudsters.

Cue Oprah Winfrey, icon, actress, movie and TV producer, chief of her OWN cable network and supporter of every progressive doctrine known to mankind.

To call her acceptance speech of the Cecil B.DeMille Award at the 75th Annual Golden Globe Awards on January 11 a sensation is an understatement. At least that’s how Progressives saw it.

Will she run against Trump in 2020? Her longtime partner, Stedman Graham, tantalizingly told the Los Angeles Times, “It’s up to the people.” Yet her BFF, Gayle King, insists Oprah will not run.

Over the past 30-plus years, the 64-year-old has become a media mogul and cultural phenomenon. Raised in poverty by a single mother, Winfrey went on to host her top-rated talk show for 25 years before ending it in 2011. Her unprecedented multimedia success has also generated what Christianity Today dubbed ‘The Church of O’, wherein Winfrey is credited with changing more lives than ever with her New Age ‘church-free spirituality’ which targets a huge mainly-female audience with a feelgood philosophy promoting self-fulfilment and self-absorption and putting her devotees firmly on the road to self-delusional doom. Not since the release of Betty Friedan’s The Feminine Mystique in 1963 has anyone so captured the heart of North American women. “If it doesn’t feel right to me, I don’t do it,” she says of her spirituality which sets feeling as its centre while eschewing true Christian teaching and the self-sacrifice it demands.

Although Winfrey has said that she has no plans to run for president and has recently been accused of turning a blind eye to the sexual predations of her long-time pal, Harvey Weinstein, she is still supported by such Hollywood heavyweights as Steven Spielberg. But with a caveat. In a recent interview, Spielberg said that although he will support her if she chooses to run, he finds the idea of a reality show star running against a talk show host “troublingly dystopian.”

But that doesn’t explain the media’s reaction to Trump or why he’s been called “evil”, “mentally ill”, a “neo-Nazi”, a “terrorist sympathizer”, a “danger” to non-white Americans, a “racist” and so much more. Or why the media seems so intent on convincing its viewers and readers to think as badly of him as they do or worse.

So what has Trump done to incur the media’s wrath and hatred, a hatred so intense and so obsessive it seems, well, supernatural?

Is it his defunding of Planned Parenthood – that touchstone of every death-dealing doctrine of the Progressive tyranny they hold dear? And woe to anyone who questions their orthodoxy!

Or is it his reversal of Obama regulations that forced Catholics and other Christians to condone abortion? Prompting this further question: Are Trump’s pro-life policies not akin to showing the Cross to vampires who shudder, show their teeth and flee?

Or was it his affectionate references to the Baby Jesus at Christmas, or his declaration during his Christmas address that Jesus Christ has always been at the heart of western civilization and all its splendour that so unhinged them?

Nor are the Progressives likely to welcome Trump’s proclamation of January 16th as Religious Freedom Day in the United States, a day that is particularly important for pro-life Americans who have been forced around the country to promote or fund abortions according to the diktats of Obama who forced Christian businesses like Hobby Lobby and even Catholic nuns like Little Sisters of the Poor to pay for abortion-causing drugs in their health care plans. Or shut down.

In comments associated with the January 16 proclamation, Trump emphasized that no American should be forced to choose between their religious faith and the law, referring specifically to those citizens who’ve been forced to promote or pay for abortions.

“Faith is embedded in the history, spirit, and soul of our Nation,” Trump said. “Our Constitution and laws guarantee Americans the right not just to believe as they see fit, but to freely exercise their religion… No American — whether a nun, nurse, baker, or business owner — should be forced to choose between the tenets of faith or adherence to the law. Unfortunately, not all have recognized the importance of religious freedom, whether by threatening tax consequences for particular forms of religious speech, or forcing people to comply with laws that violate their core religious beliefs without sufficient justification. These incursions, little by little, can destroy the fundamental freedom underlying our democracy.”

As for Oprah, well, she’s a Progressive and a strong proponent of New Age religion and population control. As evidenced by her 2009 meeting with George Soros and other billionaires who gathered in New York to discuss a plan to depopulate the world. Organized by Bill Gates, the meeting was so discreet that the billionaires’ aides were told to treat it as a “security briefing.” In addition to Oprah and Soros, attendees included the late David Rockefeller, Warren Buffett, Michael Bloomberg and Ted Turner.

“Taking their cue from Gates, they agreed that overpopulation was a priority,” reported The Sunday Times in describing the meeting which revolved around population reduction starting with third-world countries. Interestingly, attendee Ted Turner once proposed reducing the world population to about 250 million people, a 95% decrease, necessitating a major war or a viral pandemic to effect such a reduction.

The meeting was also said to be kept secret because they feared the media painting it as an “alternative world government,” which could now prove harmful to Oprah if she runs because it might create the impression of a Winfrey campaign backed by the very billionaires who attended the meeting and hinting at how an Oprah administration might operate with transnational billionaires deciding the fate of America behind closed doors with no input from its own citizens.

How evocative of St.Paul’s warning to the Ephesians: “For our wrestling is not against flesh and blood; but against principalities and power, against the rulers of the world of this darkness, against the spirits of wickedness in the high places.”

Even more evocative is Jesus’ warning in the Gospel of Mark: “For what shall it profit a man, if he shall gain the whole world, and lose his own soul?”

Yes, we live in interesting times. Only the Lord knows – if Oprah enters the presidential race – how all these worldly schemes will end. After all, 2020 is still far off, in political terms anyway.

Meanwhile, watching that strange phenomenon – that still appears to surround Trump in his efforts to restore the U.S. to a semblance of moral and financial order – continues to be interesting. I’m speaking of that phenomenon in which he achieves one declared goal after another, against all odds and regardless of who comes against him. This phenomenon is curiously two-edged as well, since it invariably seems to result in the eventual defeat – and even shaming – of whoever or whatever opposes him. What’s more, this phenomenon appears to have begun the day Trump famously descended an escalator in Trump Tower in June 2015 to announce his presidential bid. And, as of this writing, it appears to remain in effect.