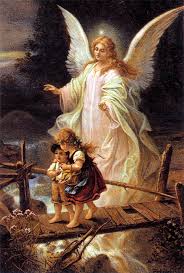 Well, some news stories have sort-of-happy endings.  A distraught father, after arguing with his wife, ‘kidnaped’ his two toddler sons, drove to a bridge, and jumped in with them in his arms, in an apparent attmpted murder-suicide.  Reports on the height of the bridge vary from 15 to 30 metres, which is survivable (I have jumped from 15 metres, in my younger days).  I read somewhere that the height of near-certain death is 100 feet, or just over the 30 metre mark.

Anyway, the unfortunate man died (requiescat in pace), but the police found his two sons, perhaps miraculously, alive and well, without life-threatening injuries.

Some stories do corroborate one’s belief in angels, especially those of children, whose guardians, as Christ warns us, see the face of God, and watch over each hair of their heads.

And speaking of angels, perhaps they are leading people away from the inanity that is NFL football, and professional sports in general.  Viewership has dropped precipitously, by double digits, and all I can say is, I cannot see much appeal in a bloated, boring game, with oversized men in spandex  wrapped in kevlar pummelling each other, with most of the plays ending within seconds.  Ponder that in a regular 3 hour-plus football game (and even the name, where their feet rarely ever touch the ball), there is on average 11 minutes or so of actual play.  Almost all of what you watch in the other 169 minutes or so is of cheerleaders, players dawdling around, replays and commercials.  No wonder there are so many bathroom breaks during the SuperBowl, and why swilling beer seems a near-necessity to get through to the end.

I have written  before on the many problems with modern sports, not least their merecenary, professional televised versions, and perhaps people are waking up.

Yes, it does seem rather odd that we pay our sports figures untold amounts of cash, while the common Canadian, and Canada itself, drowns in debt, the combined total of which, government, companies and households, even I was surprised to learn, is a whopping $4.4 trillion, and that is in U.S. dollars. Easy debt is a great evil in any society, but especially one as lacking in discipline and moral principles as Canada.  Who cares about the future, when you can get the Toyota Tundra and the house in the suburbs now?

Pope Leo XIII, in his 1891 encyclical Rerum Novarum, praised the virtue of providence, by which a man plans and prepares for the future, saving his money, instead of living only for the present.  Now, before you rebut, this is not what Christ meant when He taught that we should not worry about tomorrow:  That was a warning against anxiety, and a lack of  trust in God.  Au contraire in this case:  I would advocate some level of deep concern over how far we can carry this debt, especially while the out-of-control Liberals, at both levels of government, seem drunk on spending, to keep everyone happy as long as possible, especially the millions on their direct and indirect payroll.

That is, until the credit runs out, and the creditor comes-a-callin’.