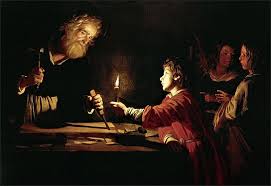 Devotion to St. Joseph has deep roots in Canada.   Of course we are familiar with the legion of spectacular miracles worked by St. Joseph through Brother Andre at the Oratory in Montreal. But the hand of Joseph has been blessing our land from the very beginning. The Jesuit relations of the 17th century attest to this early devotion and to miracles worked by St. Joseph. An examination of these records may inspire Canadian Catholics to “Hail Joseph,” and renew our personal relationship with him as the Patron of our country.

The Jesuit missionaries to Huronia frequently invoked St. Joseph specifically as the Patron of New France, asking for his intercession, and giving him credit for several miracles. There are too many to mention in a short article, but I offer a random sampling. In 1634, a young Huron with the Christian name of Marsolet was dying.   The Jesuits celebrated a Mass in honour of St. Joseph and he recovered. In 1636, a pregnant woman was on the verge of death, and the Jesuits made a vow to St. Joseph that if she recovered, they would baptize the child. And it was so. Skeptics may suggest these are cases of mere coincidence. But the Jesuits themselves interpreted such healings as a miraculous interventions by St. Joseph.

Another miracle: the summer of 1635 was bone dry, and the crops were failing. The Hurons were desperate.   The incantations of their “sorcerers” (as the Jesuits called them) failed to call down rain from the sky. The Jesuits proposed a novena of Masses to St. Joseph, which produced the desired result of abundant rains and the crops were saved.   It may not have been spectacular, but it was considered at the time undeniable evidence of the efficacy of the prayers of St. Joseph.

Interestingly, Fr. Paul le Jeune reports in the Jesuit relations of 1633 that they began their catechism with the indigenous peoples by reciting a short prayer to Jesus, Mary and Joseph.   They even include the Huron version, which ends with these words which suggest an inchoate form of a “Hail Joseph” prayer “cacataouachichien Joseph aiamihitouinan,” translated as “Oh good Joseph, pray for us.”

Currently there are several forms of devotion to St. Joseph. We honour him on his principal feast day on March 19th, and also with the title “Joseph the Worker” today, on May 1st.   His name has been inserted into all the Eucharistic Prayers, so all the faithful invoke him in every Mass. There is a litany to St. Joseph, several different novenas, and a plethora of other prayers composed by saints and pious people throughout the ages.

I am wondering if we should promote a “Hail Joseph” prayer as a complement to the “Hail Mary.”   Such a prayer could only be an inspiration of the Holy Spirit, working in the hearts of the faithful.   It would be impossible to simply compose an abstract prayer then impose it on people. But I propose that we begin the discussion, to give people food for thought.

In actual fact, there exists already a “Hail Joseph” promoted by the Josephinian Prayer Movement, which is theologically rich but perhaps too long and complex:

Hail Joseph, son of David, vicar of the Father,

nourisher of the Son, depository of the Holy Spirit.

Blessed are you among men

and blessed is thy beloved Jesus.

Righteous among the righteous, spouse of Mary,

provide for us your sons

now and at the hour of our death. Amen.

I would propose a simpler version, based on the outline of the Hail Mary:

Blessed are you among men

And blessed is your Immaculate Spouse, Mary

Pray for us sinners

Now and at the hour of our death. Amen.

It is very straighforward, but allow me to explain it briefly. In Scripture, the adjective used to describe Joseph is “a just man.” In the litany to St. Joseph, the first quality enunciated is “Joseph most just.”

Mary is full of grace, but Joseph is the “steward” of grace, a term employed by Henri-Paul Bergeron in the first definitive biography of Brother Andre. He writes: “If Jesus remains . . . the never-failing source of all graces; if the Blessed Virgin . . . being the Mediatrix of all grace, turns the course of that stream toward the earth, then St. Joseph as the Protector of the Church is the steward who distributes the divine favors to men.”

St. Joseph is often referred to as the “foster-father” of Christ. However, within the context of the firm teaching on the Perpetual Virginity of the Mother of God, we may be permitted this shortened title for Joseph as the “father” of Jesus. After all, this is a quote from Scripture, from the Blessed Mother herself. When she and Joseph found the child Jesus in the temple, she told Jesus, “Your father and I have been looking for you.”

The closing section of the prayer is an exact repetition of the ending of the Hail Mary, but it is also appropriate since St. Joseph is also the Patron of a happy death.

If Catholics are interested in introducing a “Hail Joseph” into their personal devotions, they might consider, in private prayer, adding it to the end of the Rosary. Or we might recite it even once every Wednesday, the day of the week traditionally dedicated to St. Joseph.

St. Joseph is the Patron of Canada. He is our Patron since the founding days of our nation in the early 17th century. He takes a special interest in Canada. With Jesus, he lives forever to make intercession for us.

Into his lap a good measure has been poured to overflowing — graces upon graces that he longs to distribute. His heart is attentive to the smallest stirring of our spirit, to the slightest glance in his direction, to the very least of murmured prayers. He is watching and waiting for us to approach him with open hands and open hearts.

Canada is rich in material resources such as oil, which contributes to our wealth as a nation. Should we not also rely on our spiritual resources? St. Joseph is the guardian of tremendous reservoirs of grace.   We must not leave them buried underground, but rather let them flow out by frequently invoking the name of Joseph, along with his powerful protection and intercession.   O Canada, Hail Joseph!