This intriguing, and tragic development proves a warning, if true.  A man in France had a life insurance policy worth millions. He got the jab – as Macron warned, your life is merde without it – and died from complications thereof.

The insurance company has so far refused to pay out, allegedly claiming that Covid is not a ‘critical illness’, that the vaccines are ‘experimental’, that he should have known the risks, that he took it ‘voluntarily’, and so essentially he committed suicide. And suicide is not covered by life insurance. Voilà. Q.E.D.

The court, apparently, has ruled in their favour:

The side effects of the experimental vaccine are published and the deceased could not claim to have known nothing about it when he voluntarily took the vaccine. There is no law or mandate in France that compelled him to be vaccinated. Hence his death is essentially suicide

I’m not sure I agree with the conclusion of that logical sorites, for suicide in the moral sense requires full knowledge aforethought, but the rest makes sense. One way or the other, there is some risk to these still-untested injections, one that should not be imposed on anyone.

The head of Pfizer has recently admitted the vaccines don’t really work all that well – they might reduce hospital stays –  so we’ve apparently allowed the death or injury of untold thousands for not much of anything. But don’t worry; he claims they’re working on a new vaccine, ready by March. We may presume, it too will not be fully tested, only for ’emergency use’, and will need its endless boosters.

Will people now need five injections to catch up?

How can anyone still believe their narrative?

The endgame in all of this is unclear, but one’s uneasiness grows with each passing day. Is this really all about profit, or, in the words of the poet Belloc and his little Jim, are we in danger of finding something worse?

Whatever the case, we must stand, united, against the proposed vaxx-mandates, not only for children and the young, being sacrificed on this altar of ideology and fear, but for everyone. 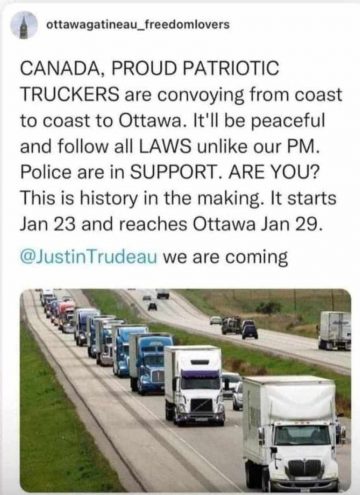 Meanwhile, thousands of trucks are convoying to Ottawa, to lock down parliament in protest. If the government follows through on its threat to impose mandates on truckers crossing the border – where almost all of our ‘stuff’ comes from – dire consequences will follow. We already need thousands more in this thankless job, few will or can do – and now thousands more will quit. The supply chain will almost inevitably collapse. If you think shelves are a little thin now, just wait. As the saying goes, if you got it, a truck brought it.

So if the truckers go, everything else does. May they be our iron wall, Charlemagne redivivus! The real line of defense, however, is within our own hearts, discerned, and strengthened, by the Spirit of God. Gird up thy loins!