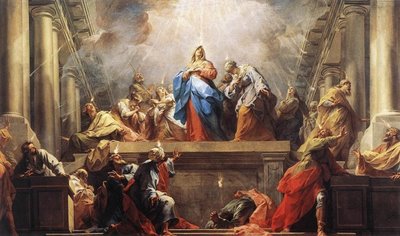 We celebrate today the memorial of Mary, Mother of the Church, an ancient title of the Virgin, which was formally instituted into the Holy Mass and the Litany of Loreto by Paul VI during the Second Vatican Council, with a subsequent official votive Mass in 1975.

Pope Francis, through Cardinal Sarah, Prefect of the Congregation of Divine Worship in an official decree of February 11, 2017 (Our Lady of Lourdes), instituted this memorial to be celebrated on the Monday after Pentecost Sunday.

During the Council, there was debate whether to have a separate document on Our Lady, but the decision was made by the Fathers (by a narrow margin, to be sure, of forty votes, one of the closest) to place the Mariological teaching at the end of the Dogmatic Constitution of the Church, Lumen Gentium, since not only was Mary’s life totally given to Christ, the nascent Church and the first believers, but she herself is the very type and perfection of all the Church is meant to be: To form believers in the fullness of charity, grace and truth. As the decree instituting this memorial teaches:

So today, especially, invoke the tender Mother of God, of Christ and of the Church, that all men of good will may respond to the truth, and that they may at least be united to Christ by grace and charity, moving towards that fullness of union in the one, holy, Catholic and apostolic Church, under the maternity of the humble handmaid, whom God has exalted above all.

Fittingly, we also celebrate today Saint Eugene de Mazenod (+1861), the 19th century founder of the Missionaries Oblate of Mary Immaculate, whose halcyonic childhood in France was interrupted by the upheavals of the Revolution, thus spending his formative years in exile abroad. Nonetheless, the handsome and noble Eugene received an excellent education, and was looking forward to a bright and successful future, a good marriage with some fortunate beautiful young woman with a substantial dowry, when, pondering the transitoriness of it all, and praying before Christ’s outstretched arms on the Cross, he underwent a deep conversion on Good Friday, 1807, dedicating his life to God from that point on to serve all the poor and abandoned souls. In 1811 he was ordained a priest, and on January 25, 1816 founded the Order to which his name now belongs, a community of priests ‘offered’ (oblatus) to God through Mary, who have done remarkable missionary work in the past two centuries. There are now over four thousand Oblates labouring in the Lord’s vineyard throughout the world. May they, like Mary, continue to be all that they are meant to be.

And, finally, a happy Victoria Day to all our readers, reminding us that Canada is not a republic, nor even technically a ‘country’, but rather a Dominion, a constitutional monarchy under the King or Queen of the British Isles and its dominions (currently, Elizabeth the Second), who delegates his or her authority to the Governor-General (Ms. Julie Payette holding that title at present), who in turn by writ permits the democratically-elected Prime Minister (alas, Justin Trudeau, insofar as we have a ‘democracy’) to govern in the monarch’s name. I wonder whether in this last election the writ should have been dropped, preferably down a deep, dark hole. But we likely get the leaders we deserve, and must endure, like the Israelites of old under their own unjust potentates.

Still, I for one am hoping for some Arthurian Catholic King of England to assume the throne, and kick some constitutional sense into the moral flabbiness and entropy of this once-strong nation. But that may have to come from the ground-up, so to speak, from all those poor and humble souls, all you readers, who work and toil in the trenches, striving in so many ways to build a culture of life, and who will not give up, even though the enemy streams over the gates, onto the beaches and into the streets. For all we are asked, as the Duke of Wellington said in another context of uncertain outcome, is that we be found doing our duty, for God first, king and country, second.