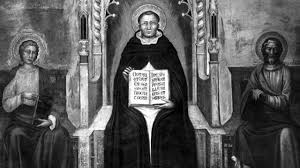 On this feast of a ‘mirthy’ saint, it is a propos to take a brief glance at what Saint Thomas says about this most Christian of attitudes towards life: Joy in the simple things:

Whether there is a sin in lack of mirth?

I answer that, In human affairs whatever is against reason is a sin. Now it is against reason for a man to be burdensome to others, by offering no pleasure to others, and by hindering their enjoyment. Wherefore Seneca (Martin of Braga, Formula Vitae Honestae: cap. De Continentia) says (De Quat. Virt., cap. De Continentia): “Let your conduct be guided by wisdom so that no one will think you rude, or despise you as a cad.” Now a man who is without mirth, not only is lacking in playful speech, but is also burdensome to others, since he is deaf to the moderate mirth of others. Consequently they are vicious, and are said to be boorish or rude, as the Philosopher states (Ethic. iv, 8).

Since, however, mirth is useful for the sake of the rest and pleasures it affords; and since, in human life, pleasure and rest are not in quest for their own sake, but for the sake of operation, as stated in Ethic. x, 6, it follows that “lack of mirth is less sinful than excess thereof.” Hence the Philosopher says (Ethic. ix, 10): “We should make few friends for the sake of pleasure, since but little sweetness suffices to season life, just as little salt suffices for our meat.”