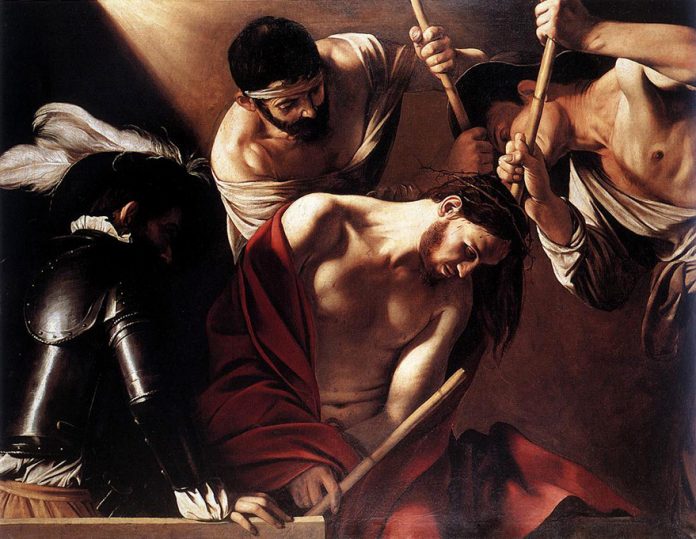 In Scripture, a single phrase can open the way to a profound insight into the message of the mysteries of the faith. A striking instance is found in the account of the passion from Saint Mark’s Gospel: “The centurion said, . . . ‘Truly, this man was the Son of God.’”[1] With these few words as an “Open sesame!” we are taken into the heart of Mark’s Gospel, whence we move into the most profound spiritual realities of Christianity. For we have here, from a pagan, recognition of the identity of the man Jesus. There are two other such moments in Mark of equal significance. One occurs in the opening verse of the book: “The Gospel of Jesus Christ, the Son of God.”[2] Here we hear the voice of the evangelist proclaiming what he had come to know about Jesus before he began writing. In the other, more important verse, we hear the voice of God himself, at the Transfiguration: “. . . a voice came from the cloud, ‘This is my beloved Son; listen to him.’”[3] So you see, at the end, at the beginning and at the centre of Mark we find solemn words that tell us who Jesus is: the Son of God. And when I say “and at the centre” I mean “centre” with a precision that will surprise you. For someone has actually counted the words in the Greek text, and he discovered that the account of the Transfiguration is dead centre.

And so, to come to grips with Mark’s Gospel, we must examine what it means to be the Son of God. The first thing we discover is that the title covers a lot of ground in the Bible. For instance, it can refer to the nation as a whole, as when Hosea speaks of the Exodus from slavery in Egypt: “When Israel was a child I loved him, and out of Egypt I called my son.”[5] In these words he is echoing a phrase from the book of Exodus itself: “Thus says the Lord, ‘Israel is my first-born son, and I say to you, “Let my son go that he may serve me.”’” Later, after the establishment of the monarchy, one of the titles of the king was God’s son, as the prophet Nathan told David when he promised that Solomon would rule after him: “I will be his father, and he will be my son.”[6] This royal title is confirmed in Psalm 2: “You are my son; today I have begotten you.”[7] There is a connection between the application of the title to the king as well as to the nation, one that Americans, living in a republic, will have difficulty appreciating. It’s that the monarch was thought to embody the entire nation in his own person. We find, for example, that all of Israel was punished after King David had ordered a census taken.[8] And let me further call to your attention to the fact that an individual pious Israelite could be called a son of God, as we see in Sirach: “Be like a father to orphans, . . . you will then be like a son of the Most High.”[9] These three themes—the nation, the monarch and the faithful individual—come together in the mysterious figure of the suffering servant about whom we shall hear on Good Friday. He stands for the nation, in that his sufferings have a universal significance that allow us to interpret his personal griefs as representing the disastrous history of the chosen people, and especially of the destruction of Jerusalem and the deportation of the people to Babylon. In this he can also represent the king, in that his personal sorrows have an effect on the entire nation: “He was wounded for our transgressions . . . and with his stripes, we are healed.”[10] And thirdly, he is presented as an individual who is faithful to the Lord in the midst of distress: “He was despised and rejected by men; a man of sorrows and acquainted with grief.”[11]

From all I have said, you can understand the excitement of the early Christians who discovered in Jesus all the traits of the suffering servant, to the point for Saint Jerome Isaiah was like a fifth evangelist, so vivid and detailed was his account of the career and in particular of the passion of Christ. But there’s more, for the most marvellous thing of all is that everything I have said can be applied, mutatis mutandis, to the individual Christian, that is, to each one of us. For by baptism we share by adoption in the dignity of Jesus, the Son of God. Saint Paul expresses this consoling truth of our faith wonderfully well in his letter to the Galatians:

But when the time had fully come, God sent forth his Son, born of woman, . . . so that we might receive adoption as sons. And because you are sons, God has sent the Spirit of his Son into our hearts, crying “Abba! Father!” So through God you are no longer a slave but a son, and if a son then an heir.”[12]

[4] The Greek text of [Mark’s]Gospel contains 11,050 words, of which 5,393 occur before the Transfiguration periscope (9, 2-13) and 5,447 after it. Hence ‘it can be said that the Transfiguration story is at the centre of Mark’s Gospel in a way in which it is not at the centre of Matthew’s and certainly not of Luke’s. Even more striking is the fact that if we take as reference points the word ‘angel’ (1,2) on one side and ‘youth’ neaniskon (16,4) on the other, we find that between them and the Transfiguration periscope there are 5,375 words on one side and 5,376 on the other. But this is not all, for ‘the centre of the pattern is not the Transfiguration periscope but the words “This is my beloved Son; listen to him” (9,7). In the periscope these words have 100 before them and101 after them—off centre by an inaccuracy of less that 1/100, of one percent of the whole.’ A. Gregory Murray, [Review of] M. Philip Scott, O.C.S.O., A Virgin Called Woman: Essays on New Testament Texts, Downside Review, CVII (1989), 64.