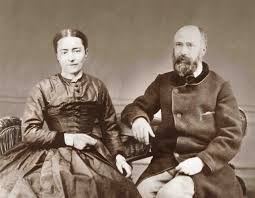 July 12th is the day chosen as the feast of the parents of the ‘Little Flower’ as Louis and Zelie Martin are often known, even though they were saints in their own right, and raised at least one other saint, along with four possible saints.

There is no strict formula to being the parents of holy and flourishing children – that is, future saints – but there are things one can do to ameliorate and expedite the process, as I tried to point out in some inchoate way in the reflection on the Benedict Option. All parents can really do is to try to become saints themselves, to provide the example, the exhortation and the environment in which sanctity may flourish, all that it means to be truly human and Christ-like. Alas, however, one can never discount the mystery of free will; each person must choose that path of life which will lead to life, or the other path that tragically, will not.

Both Louis and Zelie originally wanted to enter religious life, but Louis was rejected from the novitiate of the Augustinians as he could not learn Latin (so have hope, those who struggle with declensions! You may be called to conjugate!). And Zelie was told she did not have a vocation to the Sisters of Charity, due to her recurring respiratory problems.

God had other plans for them, not only their own mutual sanctification, but also that their union would bring forth the Little Flower, whose vocation would bear world-changing fruit. They lived the ‘Benedict Option’ well before that term became vogue, with Louis structuring his day around work and prayer, setting up a little oratory in his attic, where he would retire to contemplate, allowing his children to enter if they too wanted to pray, or ask spiritual advice.

The home-life, the ecclesia domestica, that Louis and Zelie built up certainly did wonders: Besides being the parents of Sainte Thérèse, they had five other daughters, all of whom entered religious life, five in total. They also had four other children who died in infancy.

Zelie died at the age of 45, of cancer, and Louis survived his wife for just shy of seventeen years, succumbing to the effects of a series of strokes in 1892, being taken care of by his children in the house in Lisieux, to where they had moved after Zelie’s death, and where four of the daughters were nuns in the local Carmel. Louis and Zelie had to forego the joys of seeing their ‘children’s children’, but their happy Jerusalem lay in a treasure far beyond anything this world might offer.

So not only is it possible to be married and a saint, but marriage is almost a sure and certain path to sanctity if lived well, in a spirit of sacrifice and charity, in the midst of the pots and pans, the minivans and mortgages, the messy dinners and diapers, maintaining patience and kindness, deeply immersed in prayer and the liturgy, receiving what grace one can from the Eucharist and the other sacraments.

Louis and Zelie formed their daughters well, in a way that would be quite different from what we now consider ‘education’, with all its worldly and earthly focus on a ‘job’, practicality, money, success, life-long comfort and early retirement. Rather, they emphasized interior virtue, centering one’s life on God, in the liturgy and prayer of His Church. One can only wonder what the couple would have thought of today’s so-called ‘Catholic’ schools. They set out quite intentionally for sanctity, holiness and all that entails, in themselves and their children.

The married couple, united in life and now in heaven, were together beatified by Pope Saint John Paul II on October 19th, 2008, and canonized by Pope Francis on October 18th, 2015.

If we focus on the higher and most important things, especially the ‘one thing necessary’, and all else will fall into place.