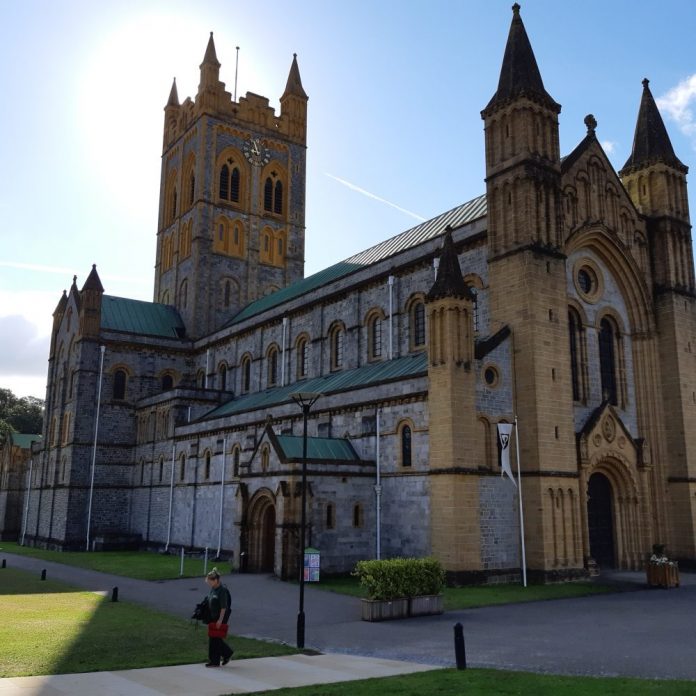 I begin this reflection from the beautiful and prayerful grounds of Buckfast Abbey, not far from the coast at Brixham, where I have been staying, and where, as I wrote the other day, William of Orange landed from Holland on that fateful November 5, 1688 (which also, ironically, is Guy Fawkes day, commemorating the foiled plot of Catholic conspirators to blow up parliament in 1605).

William, a Dutchmam, claimed the throne based on his marriage to Mary, the Protestant daughter of the Catholic (and, to my own and many other minds, rightful) King James II, the last of the Stuarts, whom William usurped (alas, for poor Mary, warring against her dear father, in Lear-esque fashion). William’s first words upon landing were a promise to ensure the establishing of the Protestant religion. The Dutch King, if such he may be termed, for there was not much English, nor even kingly, about him, was more Calvinist than Anglican, which strange and austere religion has tinged England to this day, with the usurpation of the wealth of the Church and the iconoclastic destruction of so much mediaeval beauty and tradition.

I wandered up the other day to the formerly Catholic church of All Saints in Brixham, now, like all the other beautiful and majestic pre-Reformation churches (with very rare exceptions), belonging to the Church of England. I noticed that on one of the stone facades, three alcoves sat empty; presumably they once contained three of the ‘all saints’, removed and smashed centuries ago in the Puritan iconocalstic fervour; or is that fever?

But all is not lost. To prove a point, I said Vespers last evening in front of the fading pillar commemorating William’s landing spot on Torbay quay.  There I was, reciting the Magnificat, sotto voce, as my foot leaned on the pedestal. God rest your soul, King Billy.

Ah, yes, as I alluded recently, and will never tire doing so, Deo volente, sites such as Buckfast Abbey signify that the Faith cannot be stamped out, by Henry or William or anyone else.  In fact, the Faith not only never dies, but, as John Paul II loved to signify, is always young.

The Abbey, originally founded in 1018 under King Canute(so, providentially, unbeknowst to me prior to this visit, this is its millennial anniversary). The same Canute is the one had his throne placed on the shore to be englufed by the tide, signifying to his subjects that the King’s authority had certain limits, like controlling the level of the sea, something lesser ‘kings’, such as Obama and Trudeau and all the rest of the hubristic ideologues, have yet to learn.

Like every other monastery in England, Buckfast was destroyed by Henry’s maurading troops in 1539. Before 1535, when the King’s infamous ‘visitations’ began, there were about 650 monasteries in England and over 10,000 monks. By 1540, there were none; all the monasteries sold off or left to ruin, and every monks pensioned off, or left to shift or beg as they might. There was literally nothing left, and the disastrous societal and economic, to say nothing of the spiritual, consequences of this cannot be overestimated.

Buckfast’s turn came towards the end of this pillage, and the capitulation of the monks to the King’s spiritual demands (alas) could not stave off the inevitable. Its significant wealth, with which the monks had helped the poor, was looted into the royal treasury; the vast stone structure ransacked and left to gradual decay, the site sold cheap or given to one of the King’s cringing yes-men, and one of many ‘stately manors’ duly built, whose families did not feel such an affinity for the suffering indigent all around them, now miserably bereft of any social safety net at all. Starvation, penury, disease and indigence were the order of the day. And so it was until well into the 19th century.

By that time, the land had passed into the hands of a Catholic sympathizer, one Dr. James Gale, who sold it in 1882 to French Cistercians, desirous of refounding the Benedictine community in England. They set up a small building, then discovered, as they were tilling the garden, the outline of the original monastery, inspiring them, in what seemed a quixotic hope, to rebuild the monastery according to its original dimensions and size.

One of the monks learned stonemasonry, and with five others, along with some extra help now and again (although only six worked at any one time), they began the reconstruction, bit by bit, lifting the heavy stones hundreds of feet by a complex system of pulleys, fitting them together expertly, the monks themselves in their work habits perched precariously at vertiginous heights on rickety scaffolding held together by ropes. And they wore no safety harnesses, trusting, one may suppose, in their guardian angels….one monk survived a fifty-foot fall, apparently no worse for wear. They worked for three decades, from 1906 to 1938, with the unflagging zeal and energy that faith gives, to build the glorious Norman-Gothic structure that stands just across from me. You have to be in its presence to fully appreciate what these Benedictines accomplished with such few numbers and primitive means. Ora et labora indeed. One might surmise that what the Egyptians and Romans constructed with thousands of slaves by force and fear, God can build with six joyful monks, with faith and love.

The Abbey was officially consecrated on August 25, 1932, before its final completion, and the whole complex of buildings and grounds was, and still more or less is, self-sufficient, with an ancient moat that which turns an Archimedian screw as a generator, providing all the power for the vast enterprise.  There are, in no particular order, bees, honey, wine, vegetables, fruit, a glorious church, monks, Gregorian chant, Mass, the sacraments, splendid grounds, a school, conference rooms; and the organ, well, it is one of the most majestic I have seen in a long time, just custom built, and the little that I heard of what Bach called the ‘instrument of instruments’ at Mass this morning will stay with me for some time. What more could one want?

Buckfast Abbey, alas, is now going through its own struggles, as are so many, as the Faith retreats from fair Albion like the evening tide. From the monks I saw at Mass, their average age must be past secular retirement. They have the resources so far to keep going (based partly on their share in their eponymous and popular tonic wine, but which has a controversial reptuation, used especially in Scotland, alas, as an inexpensive means of inebriation. Then again, that can be said of many drinks).

I pondered as I was shown around the vast potential of the place. The monks and their helpers continue valiantly, praying and working, with musical and educational events and courses, including the Annunciation School of Evangelization on the grounds (but a distinct entity).  Could more be done, and done differently?  Yes, one might assess, and we should pray that the Benedictines of Buckfast discern their specific and unique identity and mission, so they may attract more vocations and do the work to which God is calling them, secundum voluntatem Dei.

As I look around under the shade of this beech tree (if my limited aboreal knowledge is correct), the grounds are filled with people, in and out of the church, praying pondering, open, at some level, to the truth that will save us all.

And just be glad that the promise of King William was not kept, after all. The Faith lives in England, often hidden in pockets here and there (like the young family with whom I stayed), but that is all to the good.

God rebuilt Buckfast with six Benedictines and, as this is the feast of Saint Ignatius, the same God also built the Jesuits, using the zealous Spaniard and six companions. Yes, I know that not all things remain perfect, but it is often with such small and (apparently) insignificant things the stuff of which, I won’t say dreams, but God’s purpose, all that is true and good and beautiful, is made.