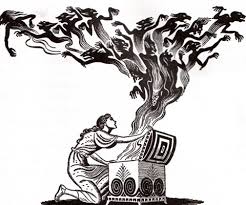 Today is the feast of Saint Lorenzo Ruiz (+1637) and his companion martyrs, put to death by the anti-Catholic shogunate in Japan, and who are now patrons of the Philippines.  They were tortured in the same manner as the semi-fictional protagonstis in Shusako Endo’s book/film Silence; but unlike the sad, ironic story, Lorenzo and his friends quite literally hung on ’till the end, in great suffering, refusing to recant their faith, and went straight to eternal beatitude, examples and intercessors for us all. Before his death, Lorenzo was reported to have declared:

If I had a thousand lives, I would offer them all.

We also celebrate good King Wenceslaus, of that rather catchy Christmas song, the one who looked around for any of his people in need in the crispy fresh snow on the feast of Stephen, murdered by his own brother in a fit of royal-dynastic jealousy on this day in 935, in the era inappropriately known as the ‘Dark Ages’, but were in fact ages of great faith and learning. From what we know of Wenceslaus, he comes across as a noble and righteous ruler, one we could use far more of in our age of opportunism, cynicism and fake friendship.

On a death of a rather sadder note, Hugh Hefner has shuffled off this mortal coil at the tender age of 91.  The founder of the ‘Playboy’ empire, Mr. Hefner made his millions paying young women to be photographed in various disrobed poses, for the masturbatory fantasies of men young and old (His ‘Playgirl’ was not so successful, for obvious reasons). He tried to cloak his evil deeds under the veneer of women’s ‘beauty’, a need for ‘love’ and ‘tenderness’, but really, it was all in the end about lust, a whole Pandora’s panoply of evils.  He took something very good and noble, indeed quite close to the divine, the beauty of the female form, which should be reserved, even consecrated, for the marital chamber, and sold it for what in the end was a bowl of pottage. Corruptio optimi pessima, the corruption of the best is the worst, and we now see the tragic effects, where the great glory of the sexual union now degraded to something base, disordered, even, dare I say it, mundane and even boring. What had to be voyeured in magazines back in the ’50’s and ’60’s is now all over the internet, in far more ‘corrupt’ and less-static ways; it seems the young now can scarcely even be bothered with sex.  If dim memory serves, the print version of Hefner’s ‘magazine’ folded, if you will pardon the expression, a few years ago.

There are still some, those happy few, who save sex, intimacy, the revelation of one’s ‘body’ (in all that means) for that noble adventure we call marriage, and we should honour them, as well as try to heal and bring back those who, sadly, have not.

I hope Mr. Hefner in some mysterious way made his peace with His Maker before his death, before he met him as his Judge.  Pray for him, and for all those corrupted by his ’empire’. God’s mercy is infinite, and He welcomes those at the eleventh hour, even at the 59th minute.

And, finally, one should peruse another fine Steyn column on the anthem protests, upon which I wrote yesterday.  He really is correct, following Lord Moulton, that a society depends not so much upon what is governed by law, but far more upon those vast swath of things neither legal nor illegal, but rather voluntary, what we used to call ‘manners’, which, as the saying goes, ‘maketh the man’, or unmaketh him, as we see before us.

Without manners, in all areas of life (not least, following from what was said above, romance and patriotism), we will become a nation of boorish, uncouth barbarians, and are already a long ways down that sorry road.

On that note, have a very merry and joyous day, and wish those you meet the same.