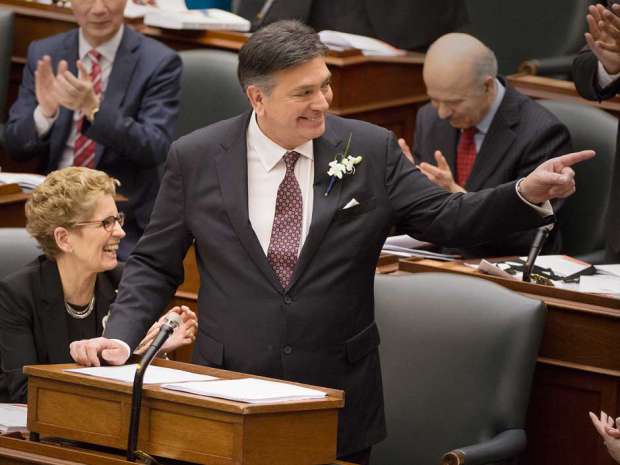 The Ontario Liberal budget was released yesterday:  As expected, costs are going up, while revenues tank, the deficit is $50 billion, the debt, well, the debt is now more than $300 billion.  With those apocalyptic figures, I am not sure how worried we should be that wine is going up ten cents a bottle.  Perhaps the rise in gas costs is more troublesome, four cents a litre, the result of Kathleen Wynne’s mafia-esque cap-and-trade system, wherein companies pay the government for the great honour of burning fossil fuels and emitting the compound that every plant lives on, yes, carbon dioxide, which is in turn exhaled by plants as oxygen.  All the money from this racket will go into ‘green technologies’, almost all of which are bottomless money pits.  Thus, we have a dilemma: If oil ever returns to ‘normal’ to stabilize the Albertan (and Canadian) economy, we may end up paying $2 per litre to drive our cars and heat our homes. If oil does not return to the prices we were used to (and there are few signs it is), Canada is facing imminent bankruptcy and insolvency.  I myself am banking on the latter, but will still fill up my tank.

Speaking of insolvency, perhaps the most troublesome aspect of the budget (besides new money for stem cell treatment, a whole topic in itself), the Liberals have now offered ‘free’ tuition to students whose parents make less than $50,000, and generous grants to those who make less than $80,000.  Of course this is not ‘free’, for we all pay for it, at least those of us who make a wage.  We were already subsidizing the vast horde of millennial-age post-secondary students to more-or-less goof off for four years (or fewer if you fail out, an ever-less likely outcome, given the financial incentive universities have to keep students).  I know.  I was there once.

Ponder this for a moment.  Every young person now after high school will have no reason not to go to university, and every reason (from a certain worldly viewpoint) to go, which means that the government will not only indoctrinate them all through elementary and high school, but now into their twenties and beyond.  Their minds and souls will be formed in the mold of our socialist technocrats mouthing in unison all the politically-correct mantras.  Hey, but who wants diversity, unless it is the ‘wrong’ kind? What was that Jesuit maxim, ‘give me the child for the first seven years, and I will give you the man’.  Now we are offering our enlightened teachers and professors the ‘child’ for the first quarter of a century, half-way to middle age, and what will we get?  Well, I don’t think too many well-formed ‘men’, or women for that matter.

I heard the government plans to fund this boondoggle by taking away whatever tax credits allowed beleaguered families to try to provide some alternate (read: private) education for their young people.  If so, things just got a lot more difficult for those of us who believe in freedom of choice in education.

As I have written before, our modern universities do not offer what our venerable ancestors (including our parents) would have called an ‘education’.  In fact, the students graduate generally less educated, or at least more mis-educated, than when their fresh faces first walked through the doors to face that week of brazen debauchery endearingly known as ‘frosh week’.   At the very least, their ignorance of the most important aspects of our culture and civilization remains woefully intact.  Even showing up for class is optional. Almost guaranteed is the fact that they graduate more immersed in immorality than when they entered. As an experiment, if you ever get the chance, ask someone unfortunate enough to live in or near a student ghetto.  Of course, there is always some good everywhere, but the overall effect of our now-even-more publicly funded post-secondary system is deleterious and this new policy, like most Liberal policies, does not bode well for our future.

I am beginning to think that the only way our government will ‘get it’, that expenditures do have a limit, is, like a drunken sailor waking up in the gaol, to experience some sort of economic crisis, even collapse.  I fear that only this will wake us, and the deluded Liberals under the money-no-object Wynne, well and truly up.  Sometimes we wander so far from the truth that it has to take us, like a thief in the night, when we least expect it.