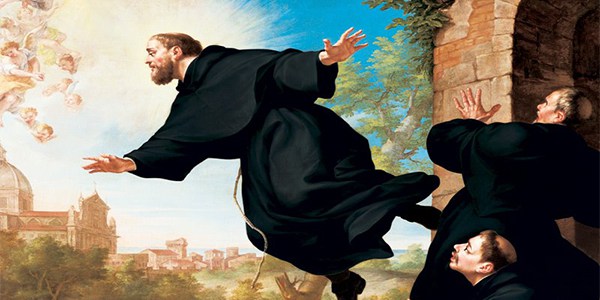 According to the laws of physics, a man should not be able to fly, at least without technological help. But are not the ‘laws of physics’, Chesterton posits, nothing but themselves miracles? Why should trees produce scrumptious apples, or water and the sky different shades of Marian blue? Why should we, hairless apes according to some, be able to think, write, pray and love, to write, or at least read, Dante and Shakespeare, and play, or at listen to, Mozart, Palestrina and Bach?

We may hence call nature itself a ‘miracle’. But, then we also have miracles of the supernatural order, which cause even greater ‘wonder’, and these abounded in the life of today’s saint, the Franciscan Friar Joseph of Cupertino, who would fly and hover as though gravity – whose origins we really know not – did not apply to him.

Amare nesciri, Saint Philip Neri would say, ‘love to be unknown’. With his father’s death while Joseph was still in utero, the Italian boy, born in 1603, his mother was left so that, like another Mother before her, she had to give birth in a stable. Giuseppe had a difficult upbringing, often abused and neglected, and he himself was prone to outbursts of anger. But from childhood, Joseph, by the grace of God, most often maintained a joyful disposition, gifted with ecstatic visions. He was so rapt in the love of God that he would suddenly fall motionless while drying a dish or hoeing a field, a beatific smile on his face, mouth agape, imperturbable, always cheerful, practising a rather severe asceticism which flowed from the deep well of his charity. He saw the world as transient, passing away, and all the troubles, persecutions and battles herein like ‘children playing with pop guns’, compared to the real spiritual warfare going on around us.

Giuseppe was generally seen as ‘useless’, but, after a number of rejections, first from various jobs, then from various religious orders when he had discerned that as his vocation, he was finally accepted into the Conventual Franciscans in 1620, after begging just to be allowed to work cleaning out their stables. He would obey his superiors and the rule without a moment’s hesitation, always seeing Christ or Our Lady in each person he met. It was almost as though holiness came naturally to him – even if he did practise a rather severe asceticism, eating solid food only twice a week, and that sprinkled with bitter powder. His continual prayer and ecstasies made study difficult, but he passed the examination for the diaconate, as the Bishop asked him the one Scripture passage on which he could discourse with ease (hence, he is the patron saint of exam-takers – students take note!).

Ordained in 1628, Friar Joseph’s devotion increased, and, paradoxically, he soon had to be secluded, for there were so many eyewitness accounts of him levitating, absorbed in God (as was recorded of other saints, such as Thomas Aquinas, a man whose build would defy easy hovering).  Modern sceptics – see the last couple of paragraphs of the Wikipedia entry on him – try to claim that Joseph was actually ‘leaping around’ like some gymnast from Cirque de Soleil, but the monks and townspeople would see the friar of Cupertino quite literally fly (he is the patron saint of aviators and astronauts). At one point, while in the presence of Pope Urban VIII himself (the one embroiled in the Galileo fiasco, but who also sent the Jesuit missionaries to Canada), Joseph hovered upwards in a fit of devotion before the Vicar of Christ, and only came back to earth at the direct order of his superior. The spectacle became such that the Franciscans eventually placed him in a solitary cell, away from any public events or community prayer, a ‘being alone with God’ – some might say self-isolation – which Friar Joseph did not mind all that much, so long as he could continue to say Mass.

Joseph was eventually permitted back into conventual life in 1657, and died on this day of September, the 18th, in 1663.

A few decades after Friar Joseph’s heavenly aviation, without guy-wires and ropes, Newton formulated his laws of physics, published in 1687 in his great Principia Mathematica, introducing the mechanistic model of the universe, one governed by immutable laws, which every schoolboy now learns.

Yet are they? The laws as immutable, I mean? Einstein discovered three hundred years after Newton that time and space are not quite what they seem to be, quite malleable, in fact. And, more to our point, Christ in the village of Nain raises a young man from the dead, and He Himself ascended before the eyes of the Apostles into heaven, both apparently ‘impossible’. But with God, that adjective does not apply.

We should remember that, in reality, heaven is not ‘up there’, nor ‘far away’, but rather all around us, with eternity and time intermingling, the former sometimes bursting forth into the latter, with the remarkable results that we call ‘miracles’. What is supernatural from our perspective, is quite natural to God.

The ‘great’ ones of the world may never have heard of Saint Joseph of Cupertino, and most don’t believe in miracles, which is too bad. For, to return to Chesterton, miracles are all around us, and would not things improve if our narrow materialistic age saw things more clearly, or perhaps more broadly, if we would begin to see ourselves and everything around us, as the saint of Cupertino did, sub specie aternitatis, under the aspect of eternity? Only then would reality really make sense; and only then will everything that transpires in this passing world, at some deep and abiding level, make us truly joyful.

As Chesterton also once quipped, the angels can fly because they take themselves so lightly, and the same applies to this humble friar. May we, with the happy Friar, see heaven all around us, however dim and obscured by sin, which is but a shadow separating us from God. For Christ has already overcome the world, and His arrival will reveal what we should, and could, have seen all along.