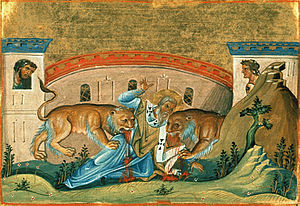 (This being not only the memorial of the one of the Church’s earliest post-Apostolic martyrs, the great Ignatius, who may have known the Apostle John personally, but also the fifth anniversary of the legalization of marijuana, or cannabis, we thought this retrospect quite fitting. As readers may know, a new ‘pot shop’ opened up a few doors down from my own house, and I can only hope most of the clientele are there for therapeutic purposes. Given their state of health and often their youth, my grounds for such hope are minimal, but hope against hope, not least as we may all one day have to make the choice Ignatius did – and he did so joyfully, racing to his witness for Christ in the Coliseum, where they thought the ‘panem et circenses’ would never end…but end they did.)

Saint Ignatius of Antioch (+107) joyfully ‘went to the lions’, as the saying goes, meeting his martyrdom in the arena of the Coliseum in the eternal city, perhaps less than a decade after the death of the last Apostle, John the Evangelist. Ignatius was the epi-scopos – literally the ‘overseer’ – of the ancient diocese of Antioch, where the ‘disciples were first called Christians’, and where Saint Peter was first a bishop, before going to Rome. There is a tradition – not a binding one, but pious nonetheless – that Ignatius was the ‘small child’ whom Christ put in the midst, to signify that the ‘kingdom of heaven belongs to such as these’.

Whatever the case, here is Ignatius, soon after his capture as a bishop:

On the long and difficult route, bound in chains, Ignatius managed somehow to pen seven letters to seven communities of early Christians, which offer not only a store of spiritual depth, wisdom and courage, as we as his vivid, attractive and courageous personality, but they also give us some of the most clear and direct evidence of the Catholic Church’s structure from the very beginning, right after the time of Christ, replete with bishops, priests, dioceses, and irrefutable belief in the Real Presence and the Holy Sacrifice of the Mass.

In his letter to the Church at Ephesus, Ignatius expresses his desire for the Eucharist as the medicine of immortality, the antidote against death, and everlasting life in Jesus Christ and in his missive to the Romans, quoted in today’s Office of Readings, he prays that he no longer take pleasure in perishable food or in the delights of this world. I want only God’s bread, which is the flesh of Jesus Christ, formed of the seed of David, and for drink I crave his blood, which is love that cannot perish, all of which follows upon the clear teaching of Christ Himself, as recounted in the Bread of Life discourse in chapter six of Saint John’s Gospel.

Small wonder, then, that Saint Cardinal Newman, in his own vain attempt to find an Anglican ‘via media‘, a kind of Protestant middle ground somewhere in the early past, quipped that to ‘delve into history is to cease to be a Protestant’. There never was a simple sort of Gospel-only church, or, rather, community, with just the Bible and a lay-pastor. From the very beginning, there was the One, Holy, Catholic and Apostolic Church, centred in Rome under Saint Peter, with all the sacraments and all the Liturgy and all the means of holiness and truth, even if obscured at times.

Ignatius gave his life for that Church, and we should be prepared to do no less.

This is also the fifth anniversary, if you will, of Trudeau’s legalization of marijuana, with Canada thereby becoming the second sovereign nation to legalize the green weed (Uruguay just beat us to the punch). Feel free to peruse something I wrote for Crisis, which I have re-posted here on Catholic Insight, on the moral difference between alcoholic beverages, permitted in our Catholic faith, and recreational drugs, which are intrinsically immoral. I have heard that marijuana also saps and weakens one’s will, the opposite of the fortitude of Ignatius; there is reason those addicted have acquired the epithet dopeheads.

Why seek an earthly, drug-induced euphoria, which only leave us feeling, and being, worse for wear, and not the peace and happiness that Christ offers, with joys that know no end?

May Saint Ignatius, who knew that peace that the world cannot offer, ora pro nobis!