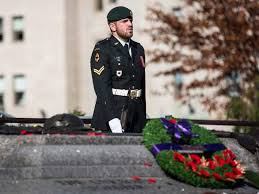 “Some men are born great, some achieve greatness, while others have greatness thrust upon them”.   So wrote Shakespeare in Twelfth Night .

‘Greatness’ may take various forms, but I have been pondering of late the greatness achieved by heroism.   We may define a hero as one acts ‘above and beyond the call of duty’.  We may speak of heroic courage (the usual sort of hero that comes to mind), but also of heroic sanctity, heroic perseverance in scientific pursuits, heroic devotion to one’s children and so on.

We usually reserve applying ‘heroic’ to truly marvelous deeds, those that inspire awe.  How could someone do that, we wonder?

It is with this sense of heroism that I ponder the deeds of our soldiers, past and present.  I heard an interview on the radio with a nonagenarian veteran from the Second World War, James Moffat, who survived the strafing and crashing of his plane, taking over from the killed gunner, then parachuting out (he was the sole survivor of his and the German plane) and landing in what he later found out was occupied Belgium.  Amidst grave danger, he was rescued by the resistance, all the while being pursued by ‘the Boche’, at one point jumping out of a window, running through a field, being chased by soldiers and dogs, and losing his trousers on a barbed-wire fence.  He spent months dodging the Germans, hiding, and running, eventually learning French and adopting a new identity, and spent the remainder of the war fighting with the resistance.

I did not hear if he was ever awarded a medal.  I would imagine he may have been.  But the point is that the ‘call of duty’ changes with changing circumstances.  What would require extraordinary courage in peacetime (for example, running over the top of the trenches into heavy machine-gun fire, with almost certain painful and bloody death looming, or stepping off the landing boats on Normandy beach), was just par for the course in both World Wars.  How does go ‘beyond’ such duty in those surroundings?  I suppose by rescuing a wounded comrade when one is not required, or storming a German pillbox singlehanded; these are the men awarded medals for ‘heroic bravery’.

I am not sure I would even be capable of what then passed for ‘normal bravery’.  But what men will do when necessity dictates is truly a marvel, for we, creatures made in the image of God, are capable of great things.

It is sad that the two soldiers killed last year on Canadian soil, Patrice Vincent and Nathan Cirillo (the anniversary of the latter’s death was celebrated last week at the War Memorial), will never get the chance to demonstrate that kind of heroism.  Their heroism is of a different order.  They were normal soldiers, doing ‘their duty’, the one walking through a parking lot, the other guarding the War Memorial in Ottawa.   It is Mr. Cirillo who has captured the Canadian consciousness, even though the ‘guarding’ in question was of a ceremonial order.  Mr. Cirillo, we may presume, did not expect to die that day; his rifle, though real, was not loaded; he would pose for pictures with tourists; he may have been bored, although we may also presume vigilant, while standing on duty.  No one, however expected someone to kill an unarmed Canadian soldier.

Yet in the mysterious designs of Providence, he was asked to make the ultimate sacrifice.  Again, I say ‘asked’ with some degree of caution, for he was shot in cold blood, with little or no warning.  His was a greatness ‘thrust upon him’.  From what we know of Mr. Cirillo, he may have ‘achieved greatness’  as a soldier if given the opportunity in battle, but, due to the actions of his deranged murderer, we will never know.

A writer to the Ottawa Citizen has declared Mr. Cirillo ‘one of our great heroes’.  Now, I commend Mr. Cirillo, and, although not knowing him personally, I bereave the loss of his life.  He seems to have been personable; he was handsome, fit and gregarious.  He bore a child as a very young man, before even of legal drinking age, (he was 24 when he died, and his boy 6).  I am glad that he and the boy’s mother (whom I did not find mentioned in any of the media stories) kept the baby, and little Cirillo Jr. given life (albeit without an intact family and, alas, now without a father).

With his youth and the tragedy of his lost life, Nathan Cirillo has become a focal point of our need for heroes in an age which so sorely lacks them.  But we should beware projecting all of these hopes upon a young man who in all likelihood would rather not have died in such a random, needless way, and who lived, and was apparently happy to live, a rather ordinary life.   Heroism is something that we do, not something that we suffer.  Nathan’s ‘heroism’ was something he did not seek, nor ask for, and his death more tragic than heroic.  Yes, he was a soldier,  a good and zealous one from all accounts, doing his duty, but as a ceremonial guard, he did not expect to die a bloody death.  The soldiers on duty in both World Wars expected, and often received, such a death daily.

Nathan’s fellow guard was also shot at, but the bullet missed, and I bet he is glad it did so.  I only wish his murderer had equally bad aim shooting at Nathan.  Fate is a curious thing.

Nathan Cirillo is a flash point for questioning our own response as Canadians to, how shall we put it, a ‘changing world’.   It has taught us that terrorism, of a sort, even if from a couple of deranged minds, warped by Islamic ‘extremism’ has now arrived on Canadian soil.

I take have taken my students on many trips to Ottawa, and the Americans amongst them are always amazed at the light security around the Parliament building.  They ask, ‘what, you can walk right up here?’  Even I find it hard to believe that, until recently, one could drive one’s own car right up to the doors.  The security guards at the front door were not even armed.

Times have certainly changed, and I will say one thing:  From now on, it will certainly take some degree of heroism to stand guard duty at war memorials or anywhere else in Canada as a soldier. You’re basically a sitting duck with an unarmed rifle, always wondering if you will hear the bullet before it hits. Other writers have commented on the irony of our disarmed soldiers being guarded by armed police officers.  Quis custodiet ipsos custodes, indeed?

It is a sad corollary to this tragic tale that the Canadian military immediately asked its soldiers not to wear their uniform in public.  I can see some prudence in this directive, but it is still sad that when we are finally able to display heroism, to ‘achieve greatness’, it is denied us.    A country should not capitulate to the enemy on its own very soil.  Could you imagine the Roman legionaries doffing their armour and tunic because a barbarian killed a fellow soldier, and threatened to do the same to others?  As we sing in our anthem on this Remembrance Day, we must ‘stand on guard’ for thee.

But that requires another post on the role of the military in this changing world.  It may no longer be a comfortable career move or resumé builder, but, what it once was and should be again, an opportunity to stand and, perhaps, die for one’s patria.  Dulce et decorum est pro patribus mori.

Nathan Cirillo did his duty, even if this duty went beyond what he intended, without his intent.  For all soldiers, the notion of ‘standing guard’ has now been raised up several notches.