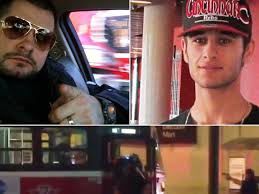 *Officer James Forcillo has been found guilty of attempted murder, a curious conviction considering that he had already killed Sammy Yatim.  That is, the jury found the officer’s first three shots to be justified in some broad notion of legitimate defense (itself dubious, as I wrote previously), but the other six shots into Sammy’s dead or dying body to be unjustified.  Since the first shots already killed Sammy, they found the officer not guilty of murder, but of attempted murder.

Hmm.  Sound complicated?  Well, compromises, as this conviction seems to be, often are.

As predicted, police officers are, in the main, or at least those who have spoken out, outraged and disappointed.  Although other front-line officers in Canada have been charged with such crimes while on duty, none have ever been convicted, so this is new.

The head of the Toronto Police Association, one Mike McCormack, was on the CBC yesterday evening claiming that Forcillo could not be convicted, since he was acting in accordance with his training.  When the host pressed the veteran officer on what his training would require in these circumstances, the officer was at a loss, claiming, essentially, that whatever officers choose to do in the concrete situation in which they find themselves is, by definition, in accordance with their training.  So officers are, by definition, above the law.  Curious.

I agree that no training, nor any sort of manual, can ever take the place of conscience, which is the court of ultimate and immediate appeal, where a man is alone with his God.  But then, as conscience implies, we are judged on our decisions in these concrete circumstances, and such judgement does not preclude police officers, nor any official.

Not to make too broad a comparison, but the Nazis tried this excuse after the war at the Nuremberg trials, that they were simply following orders, and thus the State was guilty, not they.  But the judges at Nuremberg rightly discounted this defense, claiming that regardless of the coercion of training protocol and human law, one has a duty to choose in accordance with the moral law in each and every circumstance, especially when the lives of others are at stake.

Forcillo had a duty, as a human being, to choose the proper course of action in his confrontation with Sammy Yatim, regardless of what sort of ‘training’ he received (and he seems to have been somewhat trigger happy before this incident).  Human beings are not robots, and we cannot treat them as such.  We will never know fully what went through the minds and souls of Sammy and Forcillo, and the law can only judge the objective actions as prompted by such interior states, but Officer Forcillo, outside of the extenuating circumstances, destroyed a life that fateful night in July, and he must pay the consequences, before his fellow men, and, more profoundly, before God.

*On another even more tragic form of gun violence, we now know that the troubled teenager who shot nine people last Friday at Laloche, Saskatchewan, was ‘bullied’, and called himself a ‘black sheep’.  I would like to find someone who was not bullied to some extent during one’s adolescent years, and did not consider himself an outsider at various points in that tumutuous journey to adulthood.  It is a troubling indication of our world that the unidentified ‘youth’ (who cannot be named due to the Youth Offenders Act) decided to take his ‘problems’ out with a shotgun.

How much this has to do with the specific troubles of the North, and the whole Native culture, will come out over time.  The loss of Christianity, and the resurgence of hopeless, paganistic shamanism, does not help matters at all.  A priest friend of mine just returned from spending a month in the Yukon helping out with the spiritual work over Christmas, and he said that almost none of the Natives attend Mass. Due in large part to the ‘scandal’ of the residential school system, and other abuses, there has been a widespread rejection of the faith in those who once had it, and a refusal to convert in those who do not.

Yet without faith, there is no hope and, hence, despair seeps in.  The region of Laloche is known for its disaffected youth and its suicides.  Of course, these problems are blamed on the federal government, which can always make things better with more money; but, as we have seen, the cash often disappears into various black holes of unaccountable nepotism.  I dare say that one could build four star resorts with golf courses and heated swimming pools on every reservation, and still the problems would persist.  Commentators are already blaming the ‘broken system’ rather than the youth himself.  Yet, like Forcillo, he had a choice to make, and he made the wrong one, with clearly grave consequences, including the deaths of two young brothers and two teachers.  They say he was upset by people making fun of his ‘big ears’, but I find that hard to believe, at least in the case of the teachers.  Perhaps they gave him lower grades than he thought he deserved?  If so, maybe I should start arming myself against disgruntled students who make the same case against me, but I am willing, or hope I am, to die in the cause of truth, even the lowly cause of veridical grades.

It was also curious that, when asked in his recent court appearance whether he had any family present, the skinny, gangly youth responded quietly, looking at the floor, ‘my Mom’.  Whither his father, one is perforced to wonder?

Ultimately, the problems of this troubled youth, like so many that plague that broad region we call ‘the North’, (and we may as well include all of Canada here) are not monetary, but spiritual and moral, and these can only be cured not by a resurgence of Native paganism, nor by yet another governmental agency or ‘task force’, but by a return to the faith, the sacraments, by hope in eternal things and the goodness and love of God.