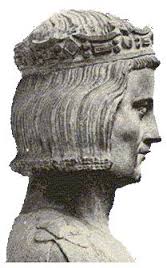 The indomitable Cardinal Sarah exhorted in an an article in CWR, to French scouts, on pilgrimage to Vezelay in France, that they should emulate the noble virtues of King Saint Louis IX, providing a timeless model of the virtues not just of royal leadership, but of laymen in general, in the good King’s integration of Christian principles and virtues into secular and worldly affairs, a very central message of Vatican II.

Louis the King was a good friend and supporter of his contemporary, Thomas Aquinas, and it is almost as though Louis incarnated Thomas’ treatise on virtuous governance, De Regno.

There is much that could be said of Louis, not least his fidelity to his wife, Margaret of Provence. Unlike so many royal marriages of his day and beyond, they actually enjoyed each other’s company, and seem truly to have been in love; their openness to life, with eleven children, two of whom died in infancy, but the rest, raised well and good, went on to become virtuous leaders in their own right, with royal marriages and dynasties; his truthfulness, ideals of governance, care for the poor, widows and indigent; his support of virtue amongst his subjects, and his intolerance of vice and evil; his acts of penance and ascetical life in reparation (his hairshirt and scourge can still be seen at Notre-Dame basilica in Paris); his chivalry, and noble crusading spirit, which eventually took his life by pestilence in Egypt on what is called the Eighth Crusade. Like any good ruler, Louis would always strive to do what he asked his subjects to do, fighting in that age of warfare alongside them, not like those condemned by Christ in the Gospels of late, who lay heavy burdens upon men’s backs, but lift not a finger to help lift them.

We may look back upon the past with rose-coloured glasses, and there were any number of real and incipient difficulties in any age. Were Louis and his contemporaries too intransigent on Islam? Well, look around, and ponder whether the world would be more peaceful if the Crusades had been successful. There was something ideal, almost dream-like, about that time, the high point of the Middle Ages, the 1200’s which William Walsh described in his own recounting as the ‘greatest of centuries’.

We should learn from those who came before us, and I would recommend that our current crop of leaders delve into the life of King Louis, as well as the aforementioned treatise of Thomas. We should make some knowledge of both requisite for taking office; but, then, that may be, what was that word, idealistic.

But, to paraphrase Chesterton, without ideals, we cannot have anything practical that works, including a kingdom, nation, country, school, or household.