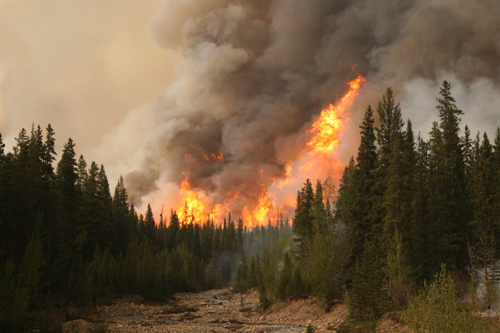 I write driving (as a passenger, not to worry) through the majestic scenery of the Canadian Rockies, the views surreally obscured by the smoke of nearby raging forest fires, a natural occurrence which normally provides much benefit:  Removing old growth, preparing for new, sort of like an arboreal Lent.

Of course, the effect on those living in the path of the fires is far more significant than the diminishing of my and other’s visual delights. Such is the consequence of living near that unpredictable and sometimes violent reality we call ‘nature’. But we pray for all those affected, that no lives are lost, and that the damage may be minimized by God’s protective care.

We should also remember, however, as I quoted Jeff Goldblum’s character in the first Jurassic Park, that ‘nature always finds a way’, the implication being, of course, that our ability to control and modify all that we mean by ‘nature’ is rather limited, something the early mediaeval King Canute demonstrated by sitting by the seashore and commanding the tide not to wet his royal feet.  Of course, the sea was implacable to the kingly edict, signifying to Canute’s subjects just such limits of earthly human power.

We modern ecological Pelagians are not so modest, as we strive to control ‘rising sea levels’ and the ‘temperature of the Earth’ by such piddling things as carbon taxes. I wondered how many megatons of ‘carbon’ were being spewed into the atmosphere by the fires, and how this compared to the cars on the highway upon which we were driving. I do not see carbon as a pollutant, but rather as a natural part of the atmosphere, which plants consume, and produce oxygen for us to breathe.  That used to be called the ‘carbon cycle’, if my memory of introductory biology still endures.

Ah, yes, the warm-mongerers still think the Earth’s temperature can be modified by Man’s behaviour in minimizing this natural and rather benign element.  Reduce your carbon footprint is the mantra embedded deep within the psyche of most Westerners in their hypnotizing ‘education’. A recent study by the University of British Columbia gave various ways individuals could help stop ‘climate change’, two of which were to avoid flying in jets (a proscription that does not seem to apply to climate experts) and to have only one child (the implication being, if one must child-bear at all). Yet the flaming forests, along with volcanoes and other natural phenomena, belch forth their billions of carbonic tons, oblivious to the modern Canutes, who lack his sense of irony and humility.

I, along with the Church, are all for proper care of the environment, not littering, using and sharing resources wisely and so on.  But we should keep in mind, as Father Schall wrote, that we are not living on a spaceship which, when supplies are depleted, apocalypse ensues; such are the fevered imaginings of the despairing Stephen Hawkings and fellow travellers who know not God nor the riches of His creation, which will last until the end of time, at the time He so wills. In the meantime, there is an abundance of wealth on and in the Earth, waiting to be tapped by human ingenuity. To give in to dystopic alarmism is a subtle form of despair, especially when this involves seeing human beings as little more than parasites and polluters upon the pristine paradise of a quasi-divine Earth. To paraphrase Christ’s words, the Earth was made for Man, not Man for the Earth.

That is why, for whatever good intentions they may have, the support of the various members of the Church for such hypotheses as global-warming/climate-change is always fraught with danger, like trying to placate a ravenous tiger with a sliver of meat and a cuddle under his chinny-chin-chin.  Rather than placate him, it will only make him all the more eager to devour you anyway. We might as well speak the truth, or at least speak our doubts about their version of the truth, from the get-go.