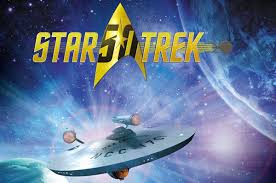 Enterprise, what a God-haunted mission you are on. All around you there is light, star-shot and splintered in the endless skies through which you journey. And yet you cannot grasp the Light from which all else proceeds, catching only fleeting glimpses in your own souls and the countless souls of those you encounter in the seemingly endless multiverse of unknown magnitude.

In a future world, where humanity has perfected travel through space and time, when they have grown in leaps and bounds of technical advancement, you are still not so very far from us. Stories transcend time and space, after all. Your joys and sorrows, triumphs and very human failings burn themselves into our hearts, and we become family to you. We can relate to you. Some things never change for sentient beings exploring their own natures, origins, and abilities.

Those who are “the most human”, whether truly human or not, are worth more than all the stars that flare up and are snuffed out in a twinkling, for within them is a depth which cannot be plumbed or emptied out like crystalline water gushing from a shattered vase. You know that, for love needs no education, no explanation, no pre-conditioning. It is felt and known, and when the outer crust of a friend’s body is broken, it burns inside you with a radiating heat. It defies all your logic and the vastness of mystery, and you ask the sky where he has gone.

You are searching for the common thread that holds the cosmos in place, for there is infinite diversity, infinite combinations, and yet you seek to find that element of unity that twines the sticks into a bundle and makes them nearly impossible to break. For all reality, no matter at what star-point you may hover, or in what dimension you find yourselves drifting, is integrally linked in a way that is left unspoken and yet permeates the concept of your Federation. There is a common ground shared by all, and a common ethic that encompasses the whole.

You are destined to uphold an inquiry shadowing a reality which cannot be grasped by the senses or measured by scientific instruments. And yet you know of the careful balance between order and freedom, loyalty and logic, the cause and the people behind it. You know that reality must be such-and-such a thing, lest it defy belief, and that the essence of beings are so much more than flesh and blood and bone and the crinkled tissue of the brain.

You face up to many false gods, and knock them from their pedestals as the fading fancies that they are. You are sickened by the use of religion for cruelty, tyranny, and hypocrisy, despising pride’s ugly head, the serpent with a forked tongue. And there are many gods that glitter in the many worlds in which you sojourn, and their gilded glamor and petty pretenses crumbles to dust. But you will not be taken in by their charms. In thrusting aside all that is untrue, perhaps you are drawing closer to that Truth which you chase…and which chases you.

I tell you, you are not far off as you might think. Some people say that humanity has “outgrown” the concept of God that has been shoved at them in reckless youth, of a small-minded autocrat perched in the clouds somewhere, trying to control us and extract our worship by force. Such a concept, I would heartily agree, needs to be outgrown. But this is not the God to which I pray, nor the restless gnawing that sends you hurtling through your self-made purgatories, climbing a series of endless man-made ladders that never reach the clouds.

To outgrow my concept of God, you would have to outgrow everything of worth and beauty and meaning and order and wonder and understanding and revelation. You would have to outgrow nature and science, love and sacrifice, mathematics and history, memory and speech, the mind and heart. You would have to outgrow growth itself, and their own inner essence. For my God is the Source of and Presence in all these things…to outgrow this God would be to have the soul shrivel into dust, and only carry on living because there is nothing worth dying for. That would be a frightening finality for the ideals of the Federation indeed.

No, Enterprise, by all you have shown and shared with us, you have proven that you are not so very far from finding the Soul of Stars. Go now, go boldly where many have gone before, and yet never in the exact same way. For every mortal’s trek takes different turns, and yet there is a common compass turning within. Our hearts are restless until our rest is found in that single greatest discovery. No greater mission has ever been launched.