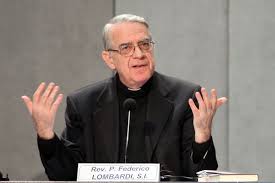 Well, you have likely heard that Father Lombardi, the Vatican spokesman, has clarified that Pope Francis was indeed referring to contraception in his remarks on the flight back from Mexico.

Here is the relevant section in Italian, from an interview which Father Lombardi gave to Vatican Radio:

Herein, the Jesuit spokesman more or less compares both the ‘situation’ of Paul VI and nuns in the Congo (a fable), as well as Benedict XVI’s answer to an academic question on condom use by homosexuals, to married couples using contraception as an ’emergency’ measure in a serious case.

The trouble is, contraception is an intrinsic evil, as the Magisterium has declared, and can never be practised, for any reason, as I wrote in my last post.   Again, Humanae Vitae:

Nonetheless the Church, calling men back to the observance of the norms of the natural law, as interpreted by their constant doctrine, teaches that each and every marriage act (quilibet matrimonii usus) must remain open to the transmission of life.

That teaching, often set forth by the magisterium, is founded upon the inseparable connection (nexu indissolubili), willed by God and unable to be broken by man on his own initiative, between the two meanings of the conjugal act: the unitive meaning and the procreative meaning.

Sadly, many will follow this advice or permission of the highest authority in the Church, to attempt such a ‘separation’, without knowing any better.  They will act in some degree of ignorance, which may well be invincible.  As Pope John Paul described this state, “an ignorance of which the subject is not aware and which he is unable to overcome by himself” (Veritatis Splendor, #62).  Hence, many will not be culpable, or fully culpable.

However, before we sit back complacent, John Paul immediately warns in the next paragraph of the encyclical that

It is possible that the evil done as the result of invincible ignorance or a non-culpable error of judgment may not be imputable to the agent; but even in this case it does not cease to be an evil, a disorder in relation to the truth about the good.

That is, couples who contracept will still be ‘harmed’ at various levels by the practice, which is the definition of an ‘intrinsic evil’:  An act that of its very nature (i.e.,. intrinsically) cannot be ordered to our final end in God, nor to the good of man.

One need only consider the physical effects of the ‘Pill’, the synthetic progestin of which it is composed, and which acts as a poison in the body of the woman.  There are also the cascade of psychological, marital and spiritual effects of severing the marital act from its two-fold end, which are and must be joined ‘inseparably’ as Humanae Vitae declared, and which, like marriage itself, Man must not divide.

In this case, this apparent permission of the Pope must be un-permitted, and, yes, faced down and opposed.  This is not the solution to the Zika crisis, nor to any difficult case concerning pregnancy.  The only solution is to be found in God’s law, which includes at times abstinence, if necessary.

Pray for Peter, pray for Francis, pray for all those in these difficult situations, and the babies at risk.  And we pray, O Lord, to deliver us from every evil and temptation thereto.