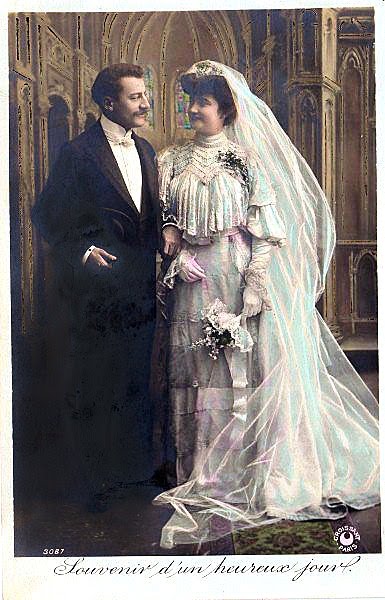 Shortly after I was married an acquaintance of mine (also married) wrote to say that marriage was much harder than she thought it would be. She was a romantic type and was of the mind that after they were married, her beloved would always think of her first, wouldn’t ever annoy her, and would keep up the same degree of affection and devotion that he showed her while they were dating. These friends are strong Catholics and devoted to one another, but lets just say she hit the wall of reality pretty hard when she realized just how unexpectedly un-romantic living with another person can be. She couldn’t quite reconcile the reality of an imperfect husband with the fanciful notion she’d had of love and marriage while she was still single, and it took her some time to realize that perhaps she, herself, wasn’t perfect either. It was understandably a rocky first couple of years.

Although I’ve certainly been there at different points in my life, I think I might have had it a bit easier than my friend. I’m not a hopeless romantic. I don’t particularly like overly sentimental gifts like cards (I throw them out after reading) or jewelry (I don’t wear a lot) or even flowers sometimes (usually overpriced and they don’t last long). In fact, I dislike Valentines Day so much so that one year I told my husband that if he absolutely had to buy me something, that he should buy it on February 15th. At least then the droopy flowers and waxy chocolate would be half the price. And lest you think I’m this miserly, heartless stoic, my husband is usually of the same mind—we’re miserly, heartless stoics together (a recipe for true love, eh?). Our love for each other runs more in the vein of taking the garbage out when asked, concert tickets for Christmas, or surprise picnic lunches. Those are the things that speak love to me much more than any card or earrings ever could, but it’s certainly something that could have caused a ruckus in our marriage, had we not talked about it and worked it out early on. (See, I’m learning!)

I mean there’s nothing overly wrong with being a sentimental romantic or preferring diamonds to picnics. Whatever floats your boat, I say. The difficulty comes when our expectations and the cold hard reality not only don’t jive, but don’t even live on the same planet—like my friend’s of her husband. It’s a sad state of affairs when the disparity between our assumptions and the sensible world affects spouses so deeply that it threatens the foundations of their marriage. It makes me wonder if unrealistic expectation is one of the main reasons couples have such difficulty adjusting to one another in the first place. I remember a priest once implying that it’s quite normal to wake up one morning after marrying thinking, “What the heck have I done? Who IS this guy?” You know the honeymoon’s over at that point, he said. Wow, really? I don’t necessarily think it’s good for everyone to be overly pragmatic and live without any hopes, dreams, or flights of fancy, but I have to believe that, with a bit of work on our part, hopes and dreams can coexist, harmoniously nestled within the cocoon of reality.

There’s an atrocious movie out there called Hall Pass (for the love of all that’s holy, don’t watch it) which tells the story of two couples at varying stages of disenchantment with their marriages. Talk about disconnect: the two wives decide to “give” their husbands a hall pass—a week of “total freedom” from the bondage bonds of marriage, meaning both husband and wife can do whatever they want, with whomever they want, with no consequences. The idea was that giving their men a little freedom from the “restraints” of marriage, they would “sow their wild oats”—or whatever—and then the guys would freely and happily choose to come back to their own wives again.

While I could manage (barely) to overlook the nudity and sexual innuendo throughout the film, the underlying principles—that marriage is basically meaningless, that it fulfills all of women’s dreams and none of men’s, that men aren’t free to choose who they marry but rather are tricked or forced into it, and that women love their husbands only out of a sense of duty—were hard to ignore, mostly because they’re unquestionably untrue. It’s movies like these that plant those crazy, whacked-out notions in our brains without our even knowing it—false impressions or opinions that make us unhappy with ourselves and with others. I mean, I thought choosing a person to be with is what people did before they got married, not after. And remind me again—how are women completely fulfilled by the office of marriage and men completely unfulfilled by it? That’s ridiculous on both counts! But it’s the collective thought of our society (and therefore present in movies, commercials, and even the news) that marriage is bondage, that restraint can’t possibly equal freedom, and that the minute life gets difficult you should move on or you’ll never be happy. And those ideas are just as pie-in-the-sky as a woman entering a marriage thinking her husband won’t ever be selfish, leave the cap off the toothpaste, or leave the toilet seat up.

So don’t be fooled. Don’t let “The Man” trick you into thinking that true happiness is wrought by anything less than giving everything you’ve got and a mountain of hard work. The interesting thing is that those cockamamie beliefs we sometimes harbour about love and relationships (like the notions that our spouses were put on this earth to attend to our every desire and whim, or that we need to ignore or discard our responsibilities in order to be happy doing what we want to do) tend to be surprisingly selfish and self-serving. And we’re not in this world to be served—to have every need met and whim satisfied—by those that surround us. It’s this kind of selfishness that actually separates us from others and from God. Rather, we were made to forget ourselves and to freely and lovingly serve others: God, our spouse, children, family, even strangers on the street. This is where contentment and joy and peace are found. As Alice von Hildebrand put it in her book, Man and Woman: A Divine Invention, “We need to acknowledge that we are responsible for the chains that bind us and turn to God’s grace for help. To humbly admit our guilt and turn to God for help is the way to change defeat into victory.” Can I get an amen?