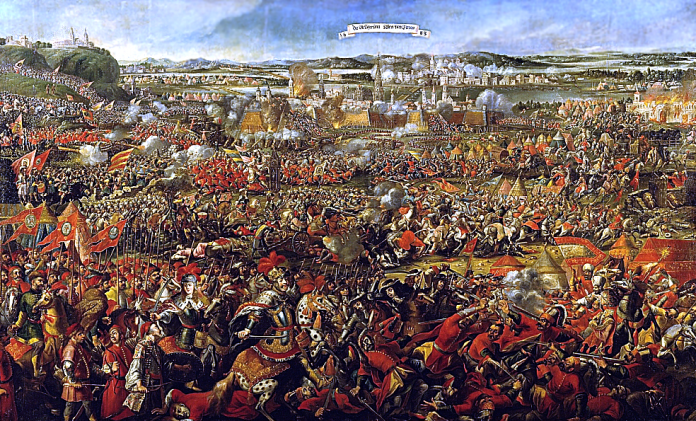 The date for the attack on the Two Towers twenty years ago was not randomly chosen, for it was on September 11th three and a half centuries ago, in 1683, the Ottoman Muslims, on the threshold of conquering Europe suffered their most ignominious and humiliating defeat.

Islam has a long historical memory, still calling Westerners ‘Crusaders’, still resentful over the Christian attempts to reclaim the Holy Land, which Mohammad’s bloodthirsty warriors had captured, enslaving the Christian population. After dominating the ‘crescent’ across Africa and the Middle East, Islam turned its eyes towards Europe, but for centuries, the Christian continent had eluded its grasp.

The Muslims were successful in taking Spain, via the strait of Gibraltar, in 711, and they held the Iberian peninsula, until its reclamation, after many battles and much bloodshed, under Ferdinand and Isabella in 1492.

The invading Muslims tried to take France, but were stopped at the Battle of Tours in 732, what they thought was their invincible army crushed by Charles Martel – the ‘hammer’ – and his stalwart, iron-clad Frankish Gauls.

After centuries of bloody struggle, the Ottamans finally took Constantinople in 1453, with the entire Eastern empire under their domination.

Now it was time for the West, and the Turks, storming their way across Europe, in the summer of 1683, made siege on on Vienna, the gateway to Europe, with a force that counted up to 300,000 men. The Viennese held out, but things were getting desperate – they sought help, from anywhere, with the European leaders turning the other way. But the Poles responded with what military might they could muster, and it was on September 11-12th, a much smaller Polish army, bolstered by prayer, confession and a pilgrimage to the shrine of the Blessed Virgin of Czestochowa, led by their indomitable general Jan Sobieski, along with forces from Saxony, Franconia, Swabia, Baden and Bavaria, swept down on the encamped soldiers of the ‘Prophet – Jan had put artificial ‘wings’ on his horses which made a dreadful noise, putting the enemy into panic – and they crushed the Muslims under Kara Mustapha Pasha, sending them fleeing for their lives, breaking the power of the Ottoman empire for good, an empire which had ravaged Christianity and her civilization for centuries. For a thrilling rendition of this battle and its prelude, see the recent piece by Peter Dabrowski.

Sobieski paraphrased Caesar after what he saw as a miraculous victory: Veni, vidi, Christus vincit. I came, I saw, and Christ conquered. Christ indeed won the day, saving Europe, the Faith and western civilization, at least until recently. There is a legend that the croissant, based on the Islamic symbolic ‘crescent’, was invented at Viennese bakeries soon afterward, as a victorious symbol of their deliverance.

The religious significance was not lost on the losers: The attacks on America on 9/11 in 2001, with the four airliners crashed into the Two Towers, the Pentagon, and a field in Pennsylvania, killing thousands twenty years ago were, in large part, a centuries-delayed Islamic revenge against the ‘Crusaders’. Islam is a great believer in such revenge, which is often more swift: Kara Mustapha, their failed general at Vienna, met his own demise more quickly, soon after their ignominious defeat, strangled to death by his elite Janissaries – kidnapped Christian children raised to be the most fervent of Muslim soldiers.

The great Hilaire Belloc saw it all more clearly at the beginning of this century, when most thought of Islam – when it was thought of at all – as a backwater, desert religion of a rather primitive people. But they were waiting, and then they discovered the wealth of oil…

Yet the war hawks in Islam – especially all those excitable lads ready to blow themselves and anyone else who happens to be around to smithereens to attain their heavenly harem – hardly need bother any longer with such dramatic and murderous terrorist mayhem. Europe’s refusal to have children, its demographic implosion so far staved off due to mostly-Islamic immigration, now more or less ensures its own eventual suicide as a Christian continent, leaving the once-great entity open to an invasion, if one wants to use that term, not of a military sort, but cultural and demographic. Peruse even a synopsis of the 1975 dystopic novel Camp of the Saints for what the near future may hold, as many millions of adherents of self-proclaimed and alleged ‘Prophet’, wait in the wings, already flooding into our once-Christian society, ageing and dying more quickly than most might think.

Jan Sobieski may well have declared Maria vincit, for in commemoration of the victory, September 12th, the day victory was assured, was made the memorial of the Holy Name of Mary, whose very name has been made sacred by the holiness of the Theotokos, the Mother of God, full of grace. The year after the victory at Vienna, in 1684, Pope Innocent XI (reigned 1676-1689) – a great and holy reforming Pontiff who resisted the Gallican ambitions of Louis XIV (who did not send any help to Vienna), cleaning up the corruption in the Vatican (still ongoing!), and who condemned abortion, declaring the fetus to have a soul – yes, this same great Pope instituted this feast in thanksgiving to the Blessed Mother for stopping the Turks and saving Europe.

In the rather heady days after Vatican II, with its own alleged ‘spirit’ (often with little connection to the actual the text of the Council), and the consequent downplaying of ‘Marian feasts’, this memorial was removed in the revision of the liturgical calendar, perhaps in some misguided sense of ecumenical outreach.

Gladly, however, the memorial of Mary’s Holy Name was placed back into the calendar by Pope Saint John Paul II in 2002, around the same time he promulgated his encyclical on the Rosary. And the Holy Father knew more than most what was, and is still is, at stake.  So thank you for that, Holy Father.

The name of Mary is powerful indeed, for, as the wedding at Cana signifies, Christ cannot refuse a request from his mother. As Saint Bernard of Clairvaux cries out in today’s Office:

All of you, who see yourselves amid the tides of the world, tossed by storms and tempests rather than walking on the land, do not turn your eyes away from this shining star, unless you want to be overwhelmed by the hurricane. If temptation storms, or you fall upon the rocks of tribulation, look to the star: call upon Mary! If you are tossed by the waves of pride or ambition, detraction or envy, look to the star, call upon Mary. If anger or avarice or the desires of the flesh dash against the ship of your soul, turn your eyes to Mary. If troubled by the enormity of your crimes, ashamed of your guilty conscience, terrified by dread of the judgement, you begin to sink into the gulf of sadness or the abyss of despair, think of Mary.

So ask away, whatever you will. May the Virgin Mary intercede for us all, when we need her help in our own turbulent times. As she said to Juan Diego a century-and-a-half before Vienna, ‘Am I not your Mother?’. So fear not, and have hope, for the victory is Christ’s, in His own good time.