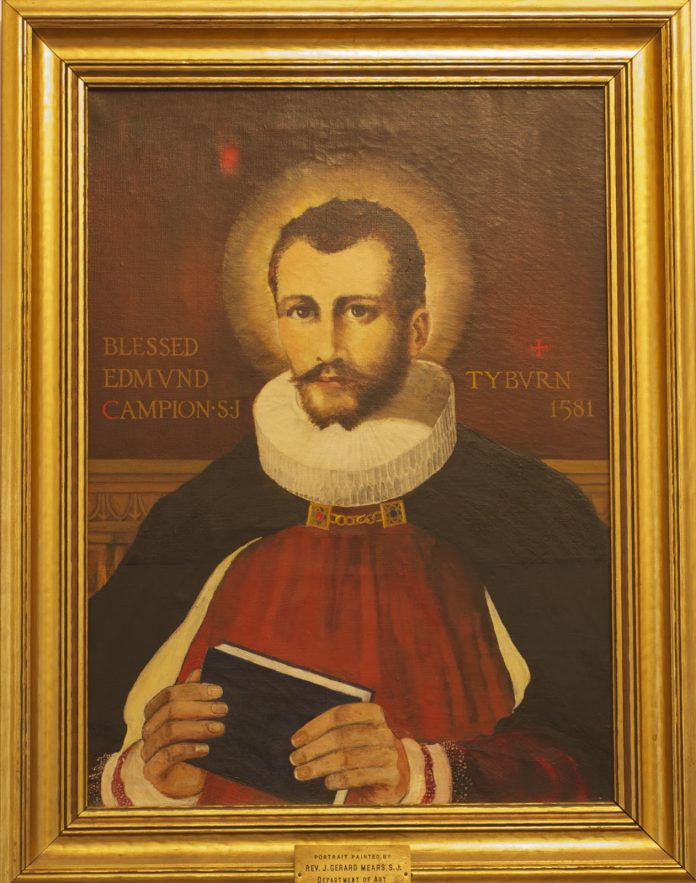 Today we celebrate Saint Edmund Campion – see Avellina Ballestri’s fine recounting of his glorious life from the archives – one of the most charming in the pageantry of the English martyrs. His sense of optimism and good cheer, even if the face of the most arduous conditions and even torture, are a testament not only to his virtue, but to his trust in the goodness of God, in all things, great and small, good and bad.

Edmund, a witty and brilliant scholar, writer and debater – called the ‘jewel of Oxford’ – was a favourite of Queen Elizabeth’s, who enjoyed the company of handsome, intelligent young men, even though she never married, with the dubious epithet of the virgin queen. That is, he was held in the queen’s good graces until his conversion to Catholicism in 1571 and, what was worse in the eyes of the increasingly anti-Catholic Elizabeth, his ordination as a Jesuit priest in 1578. Pope Saint Pius V had excommunicated the queen, with his decree Regnans in Excelsis, absolving her subjects of allegiance to her, after her own attempt, following her father Henry VIII, at seizing supreme, universal headship over the Church in England. We may debate the prudence of the Pope’s sentence, but perhaps, after the hell of Henry’s reign, the saintly and austere Pope had had it up to his papal mitre with kings and queens usurping papal – which is to say Christ’s – own power and authority. At some point, the spirit of antichrist must be confronted (a message for our own times). And it certainly brought the deep spiritual divisions out into the open.

After his ordination, Father Edmund travelled to England, illegally and secretly, saying Mass, hearing confessions, preaching the Faith – his ‘Brag’ is one of the classic texts of apologetics – and reconciling the lost, until his betrayal in July of 1581. After her excommunication, the queen – or, more properly, her ministers such as Cecil – decreed Catholicism illegal in England, with the saying of Mass, or even harbouring a priest, punishable by death.

Edmund faced the risks, and had had a good run of it, but now faced his own end. He was taken to the Tower and imprisoned for four months in a cell ironically called ‘Little-Ease’, being ‘racked’ three times, leaving his body a living wreck. Yet he handled himself more than admirably with the Anglican ‘divines’ who tried to best him in public debate. To no avail, for judges and juries, urged on by the Crown and her ministers, found guilty any Catholic, and especially any priest, who came before them.

After the unjust sentence of death was read out, Edmund proclaimed in a clear voice:

In condemning us, you condemn all your own ancestors, all our ancient bishops and kings, all that was once the glory of England — the island of saints, and the most devoted child of the See of Peter.

The good and noble Edmund – one of the last of the glories of merrie Catholic England – was hung, drawn and quartered on this day of December, 1581, four years after the first of the English missionary priests, Cuthbert Mayne, was put to death in the same horrific manner on November 29th,1577, and four decades after the deaths of the proto-English martyrs, Thomas More and John Fisher. England has been in something of a decline ever since. If the Faith is Europe, as Belloc wrote, so too the Faith is – or was – England.

We may soon be facing a new age of martyrdom, of one sort or another, if things continue to way they are. But with Edmund, be of good cheer. As the Gospel exhorts, we should hold our heads high, even as the sky is falling or the oceans swelling, even if Biden and Harris claim the presidency, for comeuppance is on the horizon for all who have rejected Christ (read the accounts of the tragic, lonely and despairing death of Elizabeth, even if we may hope against hope that she may have sought forgiveness), as well as redemption for those who have accepted His reign near at hand.