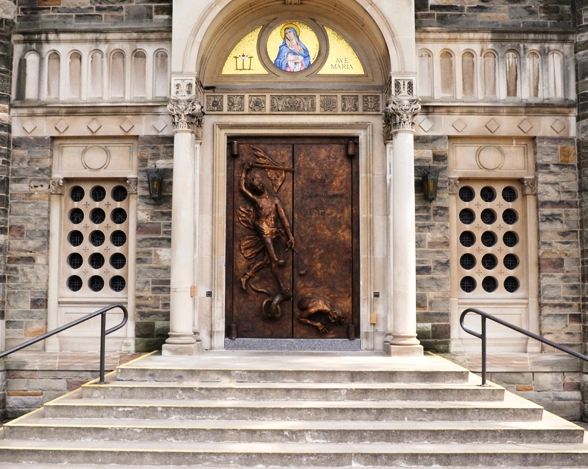 And there was a great battle in heaven; Michael and his angels fought with the dragon, and the dragon fought, and his angels. And they prevailed not: neither was their place found anymore in heaven. And that great dragon was cast out, that old serpent who is called the devil, and Satan, who seduceth the whole world. And he was cast unto the earth: and his angels were thrown down with him. The Apocalypse 12: 7-9.

For the past four years, a stunning set of doors has been gracing a well-known church in the west end of Toronto. 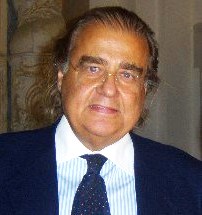 Designed and constructed by famed Italian sculptor Ernesto Lamagna, the massive bronze doors feature sculpted images of Saint Michael the Archangel defeating Satan. The doors are stark. Simple. Dramatic. Magnificent. And daily they remind parishioners and passersby alike of what their lives – and all of history itself – is really all about: The war between good and evil as waged by two spiritual entities and their armies as described in Scripture and continuing to this day until the end of time.

They also ask Quis ut Deus – carved three times in succession on the right hand door – posing the central question: Who is like unto God?

Constructed in four panels – two exterior and two interior – the doors stand out not only as a reminder that Saint Michael the Archangel is the protector of Toronto but also of the ceaseless struggle for the hearts and souls of all men, just as Saint John Paul II observed: “Although the Gates of Hell will not prevail against the Church, it does not mean we are free from tests and battles against the wiles of the devil. In this struggle, the Archangel Michael is at the side of the Church to help Christians to resist the devil who, like a roaring lion, is looking for someone to devour.” 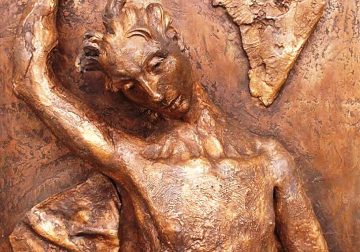 And the artist reinforces that spiritual image of conflict, of the Archangel as the Herald of Christ, sculpturing powerfully the representation of the Good that overthrows Evil as Satan bends under his blows. Thus confirming once again that all great art is always and everywhere current and relevant. And eternally recognizable.

Inside the doors are two more panels depicting human suffering reaching its peak in the Passion of Christ and imprinted with the Latin words Videte Si Est Dolor Sicut Meus, which translates as “See if there is any sorrow like my sorrow.”

On one interior panel Mary Magdalene is placed at the feet of crucified Christ. On the other, the Virgin Mary caresses her Son’s face, calling men to meditate in prayer so that, through the Cross, they may reach Paradise. And all sculpted images are in dedication to the Blessed Virgin Mary at the Cross, Our Lady of Sorrows, to whom this church has been dedicated since its original doors opened in 1940.

Eighty years later, these solid bronze doors – the first of their kind in Canada – add another spiritual dimension to this venerable church, commanding your attention from every direction.

As with most pieces of great art, however, its origins have been as mysterious and circuitous as their construction was exhaustive, taking a decade to complete.

Father Nino Cavoto takes up the story which began not long after he became pastor of Our Lady of Sorrows Church in 2005. “At that time my friend Fr.Vito Marziliano was pastor at neighbouring All Saints parish. Vito was also the chair of the Sacred Architecture Committee of the Archdiocese and considered a priest with an art sensitive eye.”

So it wasn’t all that surprising that some months after Fr.Cavoto’s arrival at the Bloor Street West church, Fr. Vito visited him with the suggestion of “bronze doors for OLS”! “He also gave me some impressive books about Maestro Ernesto Lamagna, whom he had known for several decades.”

But the timing wasn’t right because Our Lady of Sorrows parish was already undergoing much needed restoration. “It was clear to me that Bronze doors, although magnificent, would be an impossibility and so it remained on the back burner!”

Where it stayed for the next few years, despite repeated reminders by Fr. Vito of the Bronze Door Project and of the sculptor, Rome-based Ernesto Lamagna, whose reputation as a member of the Pontifical Council for the Arts was growing with ever more commissions in the Vatican and elsewhere, including a work at the entrance of the Vatican’s Secretariat of State and The Hammer  used by Pope John Paul II to open the Jubilee Year, and now in the Vatican Museum. In addition to several other bronze doors, of which there are now at least 16 worldwide – all cast in his foundry in Verona.

For the time being, however, Fr. Cavoto was simply too busy with the much needed restoration work underway.

But eventually the time arrived when he did meet Lamagna during a trip to Rome and returned to Toronto believing the project might be possible if private donors could be found, since Fr. Cavoto did not want to burden parishioners with the financial responsibility.

And soon it was confirmed that the project’s time had come at long last when private donors were found, allowing Lemagna to begin work in earnest. As for the financing, Fr. Cavoto says there were around 20 donors – not all parishioners and among them successful businessmen from the Toronto area – who gave $20,000 each.

“They each had their individual immigrant story of arriving in Toronto from Italy with very little, working hard, becoming successful and each and every one of them was happy to be part of this major experience,” he says. “They knew that this gift was to their wider church in recognition of the part their faith played in their lives. And in the end, this is a gift and it’s to the Archdiocese whose patron is Saint Michael the Archangel. So if one parish is enriched with a work of beauty, then the whole Archdiocesan community is enriched as well.”

As for the construction, however, it wasn’t at all surprising that this soon became a particularly colourful part of the story due in part to the mechanics involved. And due to the colourful personality of the Naples-born Lemagna who at one point, when confronted by some legalistic demands for guarantees, exploded: “What do you think this is? A refrigerator?”

The project’s pointman, Fred Alonzi, also became a key character in this story. Alonzi, who has known Lemagna and Fr.Vito for years, is CEO of Bridgecon Construction and, as such, was the hub of operations and an answer to prayer. As was stone mason Paolo Foglia, an artist himself, who assembled the huge granite blocks leading up to the doors themselves which required almost military-style planning.

All of which was fascinating to watch.

“After the doors arrived, in late 2015, the company involved in our restoration was intimidated by the prospect of mounting the doors,” Fr. Cavoto recalls. “They quoted us $38,000 and three weeks to mount the doors. By the grace of God I turned to Fred for help. As it turned out, Fred and his team mounted the 7,000-kilogram doors in one day for much less than the other quote. Ernesto, of course, was present. He came with one man from the foundry in Verona. Bloor Street (west of Royal York Road) was reduced to one lane because of the crane. The crew began at 9:30am, they broke for a pizza lunch and the doors were in place by 3:30pm. It was a dramatic day.”

A Thing of Beauty

“I must say that I was personally a bit stunned by the magnificence,” Fr. Cavoto says. “For one week I ended each day at the doors just gazing. And first thing every morning I was drawn to the doors and again I just gazed. This, I think, is the irony of public art. It’s right in front of you, seems so accessible, and you come across it daily so that the artistic merit of the piece goes unrecognized. It is my hope that parishioners realize the precious work of art in our possession. This Kingsway Community too is fortunate. The Archdiocese can claim a great work of art and even secular Toronto can boast as well.”

On January 9, 2016, the ceremonial opening and blessing of the bronze doors by His Eminence Thomas Cardinal Collins took place in conjunction with the Jubilee Year of Mercy and with the Cardinal acknowledging his special devotion to Saint Michael. “He’s on my desk!” whispered His Eminence, referring to his favoured statue. And the donor plaque reads, “This church opens wide its doors, and bids you welcome.”

“It’s the most beautiful thing to see these doors here,” said Maria Di Lorenzo, member of the donor committee. “It’s art that can be appreciated for generations to come, and I hope it will inspire other parishes.”

And that it will prompt comments, of which there have been plenty, grins Fr. Cavoto. Mostly positive. Though he does remember one negative comment that prompted one parishioner to retort memorably: “People who don’t like the Doors have never been to a museum, or an art gallery, or an opera. They simply cannot recognize art.”

Regardless, Lemagna’s doors depict unforgettably the epic battle of the ages for the soul and salvation of fallen Man. And the eternally important role it plays in every community. And in every age. Just as Auguste Rodin’s celebrated The Gates of Hell  –  that colossal double door sculpture in the Rodin Museum in Meudon, near Paris continues to inspire. Standing a towering 20 feet and featuring 180 figures, the 19th century doors portray a narrative from Dante’s Inferno which still stirs every human soul that sees them, as do Lemagna’s contemporary bronze doors.

“Despite new social visions, art still mitigates, placates, alleviates and spiritualizes, and it lies at the root of human need,” writes Maria Pia Cappello in her volume on Lemagna’s art. “If Goethe said that a good work of art ‘can have and will have moral effect’, The Door of Victory in Toronto can become an important manifest of salvation and powerful Christianity with a deep relationship between moral commitment and artistic inspiration. Thus, artistic sculpture and Christian spiritualism are clear: Christ, man par excellence, is placed at the centre of the universe.”

Thus, these doors take their place and fulfill their role publicly, reminding every passerby of the ceaseless spiritual struggle within the world and within himself if he will just dare to look! And to listen to what these wonderful images are telling him as they stand guard before the Holy Tabernacle bearing the Holy Eucharist inside.