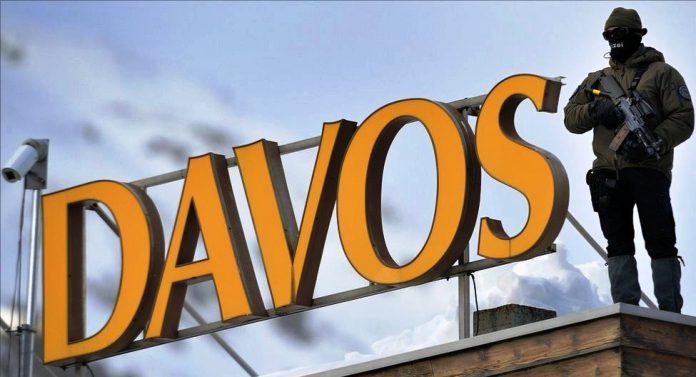 The Elites serve Democracy without the People. (George Walden, The New Elites)

Yes, it’s that time of year when the rich and famous head to the Swiss mountain village of Davos and its World Economic Forum to discuss the big issues of the day and attempt to put the world to rights for fun and profit.

So, just as they’ve done every year since the confab was started in 1971 by Swiss economist Karl Schwab, the powerful proponents of the New World Order and its globalist agenda will again descend on this Alpine town from January 23-26 to party and to attend meetings of the WEF.

This year’s festivities, however, may be a bit more sombre than last year. Why? Because after a full year of Trump, the fortunes of the Davos class– that hyper-connected network of banking and tech billionaires, elected leaders and Hollywood celebrities – are looking a bit frayed. Suggesting that things have not been going entirely their way.

Not that their obsequious Eurocrat handlers will tell them. They don’t have to. The Davos crowd is already well aware of the emerging new New World Order rising in Europe as her Centre-Left factions retreated into the wilderness in 2017.

“Atomised in France, all but wiped out in the Netherlands, humiliated in Germany, Europe’s mainstream centre-left is in full retreat,” Jon Henley admitted recently in The Guardian, the UK’s most leftwing mainstream paper. “Even in its one-time stronghold of Scandinavia, social democracy is now struggling.”

In France, François Hollande’s socialists crumbled to Emmanuel Macron’s new centrists, and the right-wing Front National surged, with their leader, Marine Le Pen, reaching the final round of voting in the presidential race for the first time.

And in Austria the pattern continued when the right wing swept to power under the young, populist leader Sebastian Kurz. As it did in the Netherlands where the Dutch Labour party saw a crushing defeat, while the right wing populists Freedom Party led by Geert Wilders surged. All pointing to an undeniable trend that, since 2000, has seen the number of populist parties across the continent almost double, rising from 33 to 63, with the largest change occurring in Eastern Europe where a new generation of  “strong men” are rising, intent on reversing the NWO-driven agendas of the European Union elites.

Rise of the Strong Men

Yes, EU bureaucrats are now struggling with a new type of leader who is not sophisticated, not managerial and not multicultural. Nor is he a soft consensus-builder wary of giving offense. Instead, he is strong, patriotic, decisive. Everything the European Commission in Brussels is not. What’s more, this type of leader is emerging in country after country, particularly in Eastern Europe which suffered more than four decades of postwar communism and where voters can spot a political con faster than most. Which means that whether Eurocrats like it or not, these strongmen are now looking like Europe’s future.

Beginning with Viktor Orban of Hungary, the trailblazer whose method of governing has become the template for Europe’s other strong leaders who, like Orban, reject the EU mantra which encourages its member countries to share the burden, to all join in and accept migrants and suffer individually for the greater good.

Orbán is having none of it: “To defend borders is a national responsibility,” he declares.

Orban is also one of Europe’s most outspoken Christian leaders who talks about “creating a Christian Hungary within a Christian Europe” and whose opposition to immigration stems from his ideas of Christian identity which have long been under threat from Leftist progressive policies that sound a lot like communism.

“I think we have a right to decide that we do not want a large number of Muslim people in our country,” Orban says. “The new state that we are constructing in Hungary is an illiberal state, a non-liberal state. It does not reject the fundamental principles of liberalism such as freedom, and I could list a few more, but it does not make this ideology the central element of state organization, but instead includes a different, special, national approach.”

Predictably, Leftists around the world hate what Orban is doing, and this colors much of the media coverage of him. But Orban is not alone. Jarosław Kaczyński, now regarded as “the most powerful man in Poland, supports Orbán’s views and shares his Christian values and regards the presence of the largely Muslim refugee population as a “ticking bomb” in Europe, a view that has drawn outrage from leftists everywhere.

Still, the loud opposition has not persuaded other eastern European leaders such as Austria’s Kurz to change their views on Islam as inimical to traditional European Christian values. Nor has opposition dissuaded Andrej Babiš of the Czech Republic or Robert Fico of Slovakia. “We do not want to change the traditions of this country, which are built on the Christian tradition,” Fico said in May 2016. “Islam has no place in Slovakia.”

All of which means that as Britain continues its EU divorce proceedings via Brexit, and the popularity of these strongmen spreads and consolidates into a block hostile to the EU and its weak leaders, the consensus is growing that the European Union is in its death throes.

But there’s a problem. The Left and the Elites in general are so dramatically disconnected from the People they purport to serve that they’re failing to understand that no power is permanent, that all things pass and that the People eventually get bored. And disgusted. Which is where many European voters are now. Bored and disgusted with the Elites’ progressive policies which have gotten ever more decadent since they began implementing them decades ago. Which is also why the People – so thoroughly fed up with the Elites’ ongoing subversion of Christendom by legalizing one proclivity after another, and by implementing ever-more-preposterous forms of social engineering in the name of tolerance – are now blaming them for the rotten results their Culture of Death has wrought.

Small wonder, they’re demanding change. Even a return to Christianity in the public square which the Elites have long sought to eradicate through secularist programs designed to be “inclusive” but which, in truth, are aimed at wiping out Christianity entirely and everywhere, including all memory of it and its traditions. Which is what all their schemes have always been about!

And the Elites’ response? Predictably, they are doubling down and advocating ever more of exactly what the People are rebelling against, particularly their policies of imposed multicultural immigration, leaving their citizenry fearing the consequential destruction of their homelands and its traditional culture.

So if you’re wondering why Justin Trudeau has placed gender equality at the centre of his government’s thinking, look no further than Davos which, in lockstep with the UN, imposes its agenda on the western world by influencing western leaders – aka the Elites – to adopt their every policy to remain in the club.

At Davos in 2016 – just three months after Trudeau was sworn in as Canada’s prime minister –  refugees, climate change and the LGBT agenda topped its list. Its website also featured a series of articles exploring LGBT issues under the theme Preparing for the Future of Gender Parity and proclaiming that WEF organizers were preparing to woo bank bosses, politicians and business executives with daily “mindful meditation sessions.”

So if Canadians wanted to know what the future looked like in 2016, this was it. In the New World Order and its promotion of the LGBT agenda and a host of other Leftist doctrines such as Climate Change, all were promoted on the World Economic Forum’s website.

What the Elites were not expecting for 2017 was that their agenda was about to meet its biggest challenge ever: Donald Trump. Just a man. Just a U.S. president. But, somehow, a corrector. A man who threatens to dethrone their progressive globalist establishment. A man whose very appearance seemed to signal their time is up.

Which is why their 24/7 obsessive attack on Trump is coming from a place far deeper than superficial politics. There is something about him that threatens these self-serving politicians, bureaucrats, academics and media dons who’ve achieved high office and wealth mostly by claiming to advocate for the People while serving the powers and principalities of this world. And their every policy confirms this.

Yet there’s tremendous irony here too, particularly in the choice of Davos itself which was the setting of Thomas Mann’s novel The Magic Mountain, published in 1924. The book, regarded as one of the most influential works of 20th century, is the story of a young man who goes to Davos to stay at a sanatorium for three weeks and ends up spending seven years.

Wrote TIME magazine in an early review: “When protagonist Hans Castorp returns to the world below the mountain, World War I is just beginning. As it turns out, the residents of the sanatorium each in their own way represent the forces that led to the war, and their concern with their health at the spa can be seen to represent the distractions through which the world is able to ignore those forces until it’s too late. So countries squabble and chatter in the presence of catastrophe; so men, in the shadow of an enormous horror, pursue their silly and incongruous intrigues.”