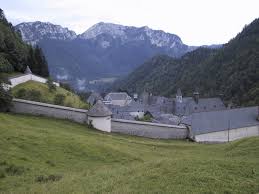 On this crisp Fall day of October the 6th, we fittingly celebrate Saint Bruno (+1101), teacher, bishop, confidante of the Pope and, perhaps most pertinent to the history of Christendom, the founder of the Carthusians, the only Order in the Church never to have been reformed, in large part since they never needed reforming. They still have their own liturgical rite, and I was privileged to serve the Mass of one of their monks, who was on the ‘outside’ for a medical appointment. Their motto is apt: Stat crux dum volvitur orbis – the Cross stands, while the world turns. And this was six centuries before Kepler and Galileo.

Of noble lineage, with a path open to a life of ease and privilege, Bruno chose the better path, early on dedicating himself to God, realizing the need for deep sanctity in the brutal 11th century, where force, violence and intrigue were too often the order of the day, as the so-called ‘Dark Ages’ gave way to the more structured ‘Middle Ages’, under the influence of the Church and her saints.

Behind the reforms that would restore order to society were those hidden consecrated souls, monks and nuns who prayed and worked, away from the tumult of the ‘world’, their sacrifice and service often known only to God. It was this band of contemplative brothers that Bruno longed to join, first trying his vocation with Robert, at Molesmes in southern France, whose group would grow into the Cistercians under the direction of their abbot, Saint Bernard at Clairvaux.

But Bruno realized this was not to be his vocation, as he and his companions desired even greater solitude and silence. Eventually, they were given land nestled in the French Alps in the region of Chartreuse, after which their Order would be named. They began a life as hermits, focused on prayer and work, in silence and in community. It was a blessed path, for which they should be grateful, as Bruno wrote in a letter to his brethren:

The Carthusian way of life was recounted in a 2005 documentary, Into Great Silence. The Carthusians also play a significant part in Robert Cardinal Sarah’s meditations on silence in his book, aptly called the Power of Silence, which he wrote in that same Grand Chartreuse, which still stand and flourishes, much as it did when founded by Saint Bruno a millennium ago.

In the mysterious designs of providence, our saint was not to enjoy his monastic seclusion for long. He was summoned to Rome by one of his former pupils, Eudes of Chatillon, who had been chosen Pope as Urban II (+1099). The Holy Father needed solid and supernaturally sound advice and counsel to govern the Church through a chaotic era, as he continued and solidified the recent reforms initiated by Gregory VII (+1085).

Pope Urban allowed his former teacher to live in a monastery near Rome, so he could be called upon, and it was there, after a full life, that Bruno died on this day in Calabria, Italy, two years after the Pope he had served, in 1101, far from his beloved brethren in their Alpine seclusion. He was hailed throughout Christendom for his holiness, his spirit of mortification of his own self and desires, his devotion, especially to contemplation and to the Blessed Virgin, his learning. The echo of his life still rings through the ages.

In accord with the hiddenness and humility written into their Rule, no Carthusian is permitted to be officially canonized, but in 1623 Pope Gregory XV placed Bruno’s name in the Roman calendar, where it still stands. Amare nesciri, said Saint Philip Neri in Rome in the 1500’s, love to be unknown – known only to the God in whose Life are all things.

We should pray for the gift of silence, at least for the love of silence, away from the noise of the ‘world’, or what Cardinal Sarah called, as the subtitle of his book, the ‘dictatorship of noise’. Try that old proverbial walk in the woods and ponder the great Saint Bruno, whose only desire, as Saint Paul urges all Christians (Col 3:3), was to be hidden with Christ in God.

The Cross does indeed stand while the world turns, the very Cross that will in the end redeem the world. And in the end, through the maelstrom of this passing life, as Bruno and his Carthusians remind us, that’s all that really matters.

By the way, the Carthusians make one of the finest of liqueurs, named after their monastery, Chartreuse, and their way of life is supported by its proceeds. Hence, like the true monastic ales – the finest beer in the world – by sipping a bit, you are, in a way, participating in their work. Ora et labora, and, when the time is right, bibere. Or, if one prays while one imbibes, is that, bib-ora?

Saint Bruno, and all holy and hidden Carthusians through the ages, orate pro nobis!