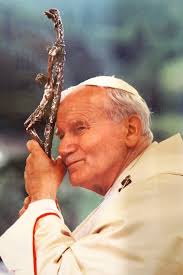 BEATIFICATION OF FRANCISCO AND JACINTA MARTO
SHEPERDS OF FATIMA

1. “Father, … to you I offer praise; for what you have hidden from the learned and the clever you have revealed to the merest children” (Mt 11: 25).

With these words, dear brothers and sisters, Jesus praises the heavenly Father for his designs; he knows that no one can come to him unless he is drawn by the Father (cf. Jn 6: 44); therefore he praises him for his plan and embraces it as a son:  “Yes, Father, for such was your gracious will” (Mt 11: 26). You were pleased to reveal the kingdom to the merest children.

According to the divine plan, “a woman clothed with the sun” (Rv 12: 1) came down from heaven to this earth to visit the privileged children of the Father. She speaks to them with a mother’s voice and heart:  she asks them to offer themselves as victims of reparation, saying that she was ready to lead them safely to God. And behold, they see a light shining from her maternal hands which penetrates them inwardly, so that they feel immersed in God just as – they explain – a person sees himself in a mirror.

Later Francisco, one of the three privileged children, exclaimed:  “We were burning in that light which is God and we were not consumed. What is God like? It is impossible to say. In fact we will never be able to tell people”. God:  a light that burns without consuming. Moses had the same experience when he saw God in the burning bush; he heard God say that he was concerned about the slavery of his people and had decided to deliver them through him:  “I will be with you” (cf. Ex 3: 2-12). Those who welcome this presence become the dwelling-place and, consequently, a “burning bush” of the Most High.

2. What most impressed and entirely absorbed Bl. Francisco was God in that immense light which penetrated the inmost depths of the three children. But God told only Francisco “how sad” he was, as he said. One night his father heard him sobbing and asked him why he was crying; his son answered:  “I was thinking of Jesus who is so sad because of the sins that are committed against him”. He was motivated by one desire – so expressive of how children think – “to console Jesus and make him happy”.

A transformation takes place in his life, one we could call radical:  a transformation certainly uncommon for children of his age. He devotes himself to an intense spiritual life, expressed in assiduous and fervent prayer, and attains a true form of mystical union with the Lord. This spurs him to a progressive purification of the spirit through the renunciation of his own pleasures and even of innocent childhood games.

Francisco bore without complaining the great sufferings caused by the illness from which he died. It all seemed to him so little to console Jesus:  he died with a smile on his lips. Little Francisco had a great desire to atone for the offences of sinners by striving to be good and by offering his sacrifices and prayers. The life of Jacinta, his younger sister by almost two years, was motivated by these same sentiments.

3. “Another portent appeared in heaven; behold, a great red dragon” (Rv 12: 3).
These words from the first reading of the Mass make us think of the great struggle between good and evil, showing how, when man puts God aside, he cannot achieve happiness, but ends up destroying himself.

How many victims there have been throughout the last century of the second millennium! We remember the horrors of the First and Second World Wars and the other wars in so many parts of the world, the concentration and extermination camps, the gulags, ethnic cleansings and persecutions, terrorism, kidnappings, drugs, the attacks on unborn life and the family.

The message of Fátima is a call to conversion, alerting humanity to have nothing to do with the “dragon” whose “tail swept down a third of the stars of heaven, and cast them to the earth” (Rv 12: 4). Man’s final goal is heaven, his true home, where the heavenly Father awaits everyone with his merciful love.

In her motherly concern, the Blessed Virgin came here to Fátima to ask men and women “to stop offending God, Our Lord, who is already very offended”. It is a mother’s sorrow that compels her to speak; the destiny of her children is at stake. For this reason she asks the little shepherds:  “Pray, pray much and make sacrifices for sinners; many souls go to hell because they have no one to pray and make sacrifices for them”.

4. Little Jacinta felt and personally experienced Our Lady’s anguish, offering herself heroically as a victim for sinners. One day, when she and Francisco had already contracted the illness that forced them to bed, the Virgin Mary came to visit them at home, as the little one recounts:  “Our Lady came to see us and said that soon she would come and take Francisco to heaven. And she asked me if I still wanted to convert more sinners. I told her yes”. And when the time came for Francisco to leave, the little girl tells him:  “Give my greetings to Our Lord and to Our Lady and tell them that I am enduring everything they want for the conversion of sinners”. Jacinta had been so deeply moved by the vision of hell during the apparition of 13 July that no mortification or penance seemed too great to save sinners.

She could well exclaim with St Paul:  “I rejoice in my sufferings for your sake, and in my flesh I complete what is lacking in Christ’s afflictions for the sake of his body, that is, the Church” (Col 1: 24). Last Sunday at the Colosseum in Rome, we commemorated the many witnesses to the faith in the 20th century, recalling the tribulations they suffered through the significant testimonies they left us. An innumerable cloud of courageous witnesses to the faith have left us a precious heritage which must live on in the third millennium. Here in Fátima, where these times of tribulation were foretold and Our Lady asked for prayer and penance to shorten them, I would like today to thank heaven for the powerful witness shown in all those lives. And once again I would like to celebrate the Lord’s goodness to me when I was saved from death after being gravely wounded on 13 May 1981. I also express my gratitude to Bl. Jacinta for the sacrifices and prayers offered for the Holy Father, whom she saw suffering greatly.

5. “Father, to you I offer praise, for you have revealed these things to the merest children”. Today Jesus’ praise takes the solemn form of the beatification of the little shepherds, Francisco and Jacinta. With this rite the Church wishes to put on the candelabrum these two candles which God lit to illumine humanity in its dark and anxious hours. May they shine on the path of this immense multitude of pilgrims and of all who have accompanied us by radio and television. May Francisco and Jacinta be a friendly light that illumines all Portugal and, in special way, this Diocese of Leiria-Fátima.

I thank Bishop Serafim, of this illustrious particular Church, for his words of welcome, and with great joy I greet the entire Portuguese Episcopate and their Dioceses, which I deeply love and which I urge to imitate their saints. A fraternal greeting goes to the Cardinals and Bishops present, with a special word for the Pastors from the community of Portuguese-speaking countries:  may the Virgin Mary obtain reconciliation for the Angolan people; may she bring comfort to the flood victims of Mozambique; may she watch over the steps of Timor Lorosae, Guinea-Bissau, Cape Verde, São Tomé and Príncipe; may she preserve her Brazilian sons and daughters in the unity of faith.

I extend a respectful greeting to the President of the Republic and to the authorities who have wished to take part in this celebration. I take this occasion to express, through them, my gratitude to everyone who helped make my pilgrimage possible. A cordial embrace and a particular blessing to the parish and city of Fátima, which today rejoices in her children who are raised to the honours of the altar.

6. My last words are for the children:  dear boys and girls, I see so many of you dressed like Francisco and Jacinta. You look very nice! But in a little while or tomorrow you will take these chothes off and … the little shepherds will disappear. They should not disappear, should they?! Our Lady needs you all to console Jesus, who is sad because of the bad things done to him; he needs your prayers and your sacrifices for sinners.

Ask your parents and teachers to enrol you in the “school” of Our Lady, so that she can teach you to be like the little shepherds, who tried to do whatever she asked them. I tell you that “one makes more progress in a short time of submission and dependence on Mary than during entire years of personal initiatives, relying on oneself alone” (St Louis de Montfort, The True Devotion to the Blessed Virgin Mary, n. 155). This was how the little shepherds became saints so quickly. A woman who gave hospitality to Jacinta in Lisbon, on hearing the very beautiful and wise advice that the little girl gave, asked who taught it to her. “It was Our Lady”, she replied. Devoting themselves with total generosity to the direction of such a good Teacher, Jacinta and Francisco soon reached the heights of perfection.

7.”Father, to you I offer praise, for what you have hidden from the learned and the clever you have revealed to the merest children”.

Father, to you I offer praise for all your children, from the Virgin Mary, your humble Servant, to the little shepherds, Francisco and Jacinta.

May the message of their lives live on for ever to light humanity’s way!