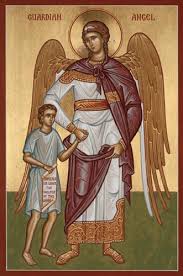 This memorial of the Guardian Angels – this year trumped by the Sunday, but it’s still good to make a mention – goes back to the year 1500, the very dawn of the Protestant ‘Reformation’, seventeen years before Luther would pin his theses to the church door at Wittenburg on All Hallow’s Eve, with the whole of Europe still at least nominally Catholic. Although Luther, Calvin and company rejected the Mass and their priesthood, but they still believed in angels. Some saints, such as Rita of Cascia, could see their angels, who would disappear if they – that is, the would-be saint – committed a fault, and reappear upon repentance. If we had but eyes to see…

Our belief in angelic ministers – powerful spiritual beings who exist and act beyond the corporeal realm – may be traced to the earliest Tradition, to the Fathers, and right back to Christ Himself, whose warning about scandalizing children He links to their angels always beholding the face of the Father. And who of us would dare court the wrath of such a being? We may even go further back, to Moses and the Israelites, to whom God gave an ‘angel to guard their way’, and to whom they – and we – were bound to listen.

This commemoration seems to have taken initial shape by the impetus of the Franciscans, whose founder (whose feast is in two days) had an angelic quality about him, and a great devotion to the angels. Then again, the Dominicans can also claim something of a role, for it was the great Saint Thomas who, in the century after Francis, wrote the foundational treatise on angels in the Prima Pars of his Summa (Questions 50 to 74). As he puts it in his own pithy way:

To pretend angels do not exist because they are invisible is to believe we never sleep because we don’t see ourselves sleeping.

The feast was made official and universal in the post-Tridentine era by Pope Paul V in 1607, with the decree co-signed by the Jesuit Saint Robert Bellarmine, who was one of the most clear-sighted of men in that era of confusion, and believed very much in angels, as all clear-sighted men do. This day also marks the foundation of the lay apostolate, canonically the ‘personal prelature’, of Opus Dei by Saint Josemaria Escriva in 1928.

What we believe as Catholics is that every human being has an angel ‘assigned’ to him at his (the human’s) creation, to ‘light and to guard’ his way to heaven. Hence, there are at least many billions of angels, a heavenly host indeed. As the aforementioned Thomas teaches, angels are remarkably powerful beings of pure intellect and will, not limited by space and time, but who can move through, and even affect, space and time far more effectively than we mere fleshy mortals. They form a hierarchy, if you will, in terms of their own ‘likeness’ to God, acting as our spiritual bodyguards, but more than that, our friends and confidantes, if we but make them so. For any friendship is fostered and deepened by conversation which, in the supernatural realm, we call ‘prayer’.

By putting his angel beside us, the Lord intends to accompany every moment of our lives with his love and protection, so that we can fight the good fight of faith (cf. 1 Tm 6:12), and give fearless and unhesitating testimony of our loyalty to the One who died and rose for our redemption.

Let us invoke the Queen of angels and saints, that she may grant us, supported by our guardian angels, to be authentic witnesses to the Lord’s paschal mystery.

So pray to your angel, ask his guidance, inspiration, protection, not least in these times of scandal, doubt and confusion, in a prayer given a partial indulgence by Pope Pius VI:

Angel of God, my guardian dear, To whom God’s love commits me here, Ever this night (or day) be at my side, To light and to guard, to rule and to guide.

And as the 11th century Cistercian Bernard of Clairvaux in today’s Office of Readings exhorts:

We should then, my brothers, show our affection for the angels, for one day they will be our co-heirs just as here below they are our guardians and trustees appointed and set over us by the Father. We are God’s children although it does not seem so, because we are still but small children under guardians and trustees, and for the present little better than slaves.

Along with the good angels, who chose beatitude, by choosing humility and service, there are also the bad angels, who are evil because they chose badly, that is, pride and arrogance. Our Tradition calls demons or devils, made hokey by Hollywood, but quite real and quite malicious. They prowl about with their own malign master looking for souls to devour. Of course, they cannot really ‘devour’ souls in a physical sense, but rather by tempting (within the limits of God’s providence) we may voluntarily allow ourselves to be ‘eaten’ by their wiles, our souls mired, as Saint Peter would graphically put it, in the vomit of our own sin. As Milton has Satan declare in despair in his own Paradise Lost:

So farewell hope, and with hope, farewell fear, / Farewell remorse! All good to me is lost; / Evil, be thou my good.

But we have no reason to fear sharing his dreadful fate, as we return to Saint Bernard to finish up these thoughts for now:

Even though we are children and have a long, a very long and dangerous way to go, with such protectors what have we to fear? They who keep us in all our ways cannot be overpowered or led astray, much less lead us astray. They are loyal, prudent, powerful. Why then are we afraid? We have only to follow them, stay close to them, and we shall dwell under the protection of God’s heaven.