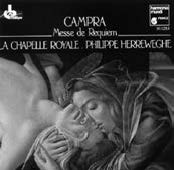 Campra wrote this masterpiece around 1699, before he abandoned his duties as maître de musique at the cathedral Notre Dame for the stage. It was considered the greatest Messe De Requiem along with Jean Gilles’ (1668-1705) work in the eighteenth century and used at all state or ceremonial funerals in France. This Mass is the most recorded in our own generation of all this priest-composer’s work. This re-release (originally recorded in 1987) is sublime and transcendental with his handling of the twenty-two member choir (many of whom were soli, including the Canadian soprano Isabelle Desrochiers). One becomes lost in time through the grave character of the work, taken at a pace that respects an Office of the Dead. Unfortunately many modern conductors treat liturgical musical works in a secular way, equating fast tempi with energy, dropping sixteenth notes along the way in an effort to sound au courant, powerful, and capable of retaining the interest of the listener. Our fast-paced life has only accelerated in the last hundred years along with the pitch used by musical instruments. Campra’s Mass is at the pitch that was popular in his own day: A=392, well below our A=440 and the recent and up to A=512. At A=392 pitch the voice doesn’t have to strain and the high French tenor voice called haute-contre doesn’t sound feminine at all, like many of the counter tenors of our time. For hautecontre is not really a counter tenor at all.

The soli (two soprani, tenor, haute-contre, bass) all have solos that describe the Latin text in an emotional or dramatic fashion but it is the entire choir that creates much of the magnificence of this work, as it moves in waves ever higher as the piece progresses. The choral parts lift the soul of the listener to peace and calm after sorrow, yearning, loss, fear, and the shock of death. Campra brilliantly paints the transition of all the stages of reaction, self-identification, reflection on mortality, and the emotional quotients.

This CD is universally regarded as one of the great classics of French Baroque discography and this writer considers it one of the greatest liturgical recordings of the twentieth century. It follows the standard rite with a Requiem aeternam, Kyrie, Graduel, Offertoire, Sanctus, Agnus Dei, Post-Communion. Although it is only 43:25 in length, its over-powering beauty and grace are a heartfelt cry and prayer for the departed soul to the Almighty God, for forgiveness and deliverance. Truly this realization is a penitential plea that pierces the heavenly realms with its divine sounds.